How Dungeons & Dragons Taught Me To Love Travel 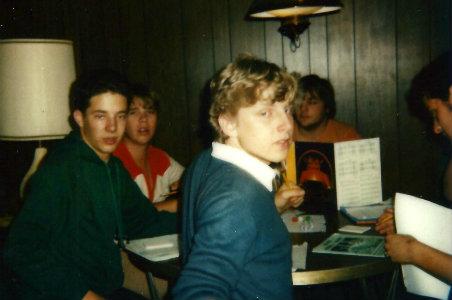 As a teenager growing up in Florida, I had never seen snow. But there I was, getting pelted in the face by a driving snowstorm as I scaled an ice-covered mountainside in hopes of ambushing the frost giants.

In reality, I was sitting at my family's brown-and-gold dinette set with my younger brother and three friends who lived around the block. The table was littered with slightly gnawed pencils, sheets of graph paper, and oddly shaped dice in every color imaginable—unmistakable signs that this was a long night of the extremely popular fantasy role-playing game Dungeons & Dragons, which was first released 40 years ago this month.

There might have been a chill in the air, but that was only because we were sitting directly below an air-conditioning vent. Other than that, there were no similarities between that wood-paneled kitchen in a non-descript suburban neighborhood and the place where I imagined myself to be: a deep glacial rift off of which lay numerous icy caves waiting to be explored.

The monsters inhabiting these caves—a pack of wolves, roving bands of ogres, and fearsome frost giants with bluish skin and white beards crusted with ice—were only of passing interest to me. I don't know if my brother and our friends enjoyed the hack-and-slash aspect of the game, but I found the endless dice-rolling to determine whether a sword had met its mark pretty pointless. For me, the game was all about the journey.

All of the overprotective mothers who railed against D&D when it was first released would probably be shocked today that many of their kids credit it with sharpening their critical thinking, or encouraging out-of-the-box problem solving. In my case, it fostered a love of travel that continues to this day.

Anyone who has joined a D&D campaign (or played a video game like Skyrim or watched any of the Lord of the Rings movies) will understand what I'm talking about. It's no coincidence that in D&D you sketch out the region you are exploring on graph paper, drawing squiggly lines that eventually reveal where you are and where you're going. Finding your way to the lost caverns high in the mountains or the keep on the borderlands isn't beside the point—it's the whole reason for the game.

At least that was true for my character, Zeffen of the Misty Valley. A cranky dwarf fighter with almost no charisma but strength and dexterity to spare (and a broadsword that was officially against the rules), he never returned to his homeland after his initial attack of wanderlust. He was always urging his fellow explorers to push forward, never content to rest when something interesting might be beyond the next ridge. (Long story short, the foul-mouthed little guy defiantly touched a magic mirror and was zapped into another dimension—all because our Dungeon Master, the game’s leader and referee, thought he was getting too powerful.)

Zeffen covered a lot of ground, and I loved the crudely drawn maps that we made during those ongoing adventures. Several of them, including the one from the frost-giant expedition, I kept for years. It took me a while to figure out why. My parents had neither the money nor the inclination to travel too far from home, so nearly every year we'd spend my father's limited vacation time visiting favorite cousins in Tennessee. But those handmade maps were a record of the places that I had visited, at least in my mind.

Around the same time I began to collect maps of real places, many of them torn from issues of National Geographic. I remember thumbtacking an atlas of Celtic Europe to my bedroom wall. The thick lines and stylized type were reminiscent of the artwork from the many D&D manuals, which appealed to me. And the map of Medieval England, which included a drawing of some suits of armor, provided even more places I could explore.

When I took my first trip abroad—to Germany, to see my sister after her eldest son was born—I waited until I was aboard my flight to Frankfurt to unfold my map of Europe. I think that planning out the exact route I'd be traveling or knowing what I'd find at the end of the road would have taken away a bit of the adventure. Even today I'm reassured to have that map on the wall, or in a guidebook, or stuffed in my back pocket, but I don't peruse it too much in advance.

Never having traveled on my own before, I tackled the experience like a rollicking D&D campaign. On that first trip I hopped aboard a train bound for Munich, then a bus to Prague, where, as Zeffen had done many times, I had to bribe the border guards (not for entrance to the country, but for a stamp in my passport). Having no real itinerary clearly suited me. Since then I’ve gone miles out of my way to explore a hilltop temple that I glimpsed from the back of a tuk-tuk in Thailand, and talked my way into a just-excavated royal tomb on the edge of a rainforest in Honduras.

Luckily I met (and later married) someone who understands this kind of travel. A decade ago we both quit our jobs and embarked on a six-month trip through Central America, beginning at the northern border of Mexico and continuing until the Pan-American Highway petered out in the jungles of Panama. The maps in our guidebooks pointed the way, but we allowed ourselves a lot of leeway, pausing for days in places we liked, hurrying past places we didn't, and always willing to throw our itinerary out the window entirely.

Peering down into bubbling lava inside the cone of an active volcano, hiking to villages miles from anywhere, clamoring over vine-covered temples that haven’t been occupied for 1,000 years: We were clearly in our element. And I think that the trip would also have satisfied Zeffen of the Misty Valley.

Mark Sullivan is a travel editor for Fodor’s, specializing in cities and cultural destinations. His most recent piece was published in Tablet. Follow him on Twitter: @markenroute.