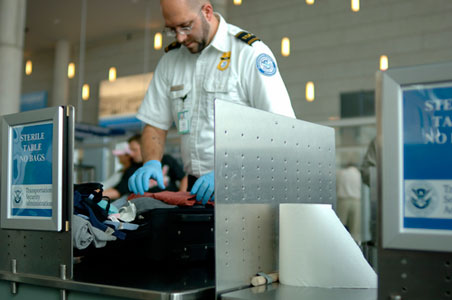 Passengers traveling in the United States will soon be able to carry small pocket knives through TSA checkpoints. This is just one of several changes to the screening policies announced by TSA Administrator John Pistole at the 22nd AVSEC World conference in New York. The rules change will align the US security policy with that of the European Union.

This rule change will permit most small pocket knife blades, up to 6cm (2.36 inches) through the security checkpoints. Also permitted under the new rules are bats weighing less than 24 ounces and no longer than 24 inches, lacrosse sticks, hockey sticks, pool cues, ski poles, and up to two golf clubs.

Speaking about the change, Pistole noted that the move is in line with the TSA’s focus on risk-based security, focusing on higher priority threats. Pistole wants the TSA agents to be focused on higher priority items like non-metallic explosives rather than these items which are unlikely to raise the risk of passengers or planes. "Frankly, I don’t want TSA agents to be delayed by these," Pistole said.

This is the first time knives will be permitted through security checkpoints since September 2001. Many types of blades, including box-cutters, will remain prohibited.

Not everyone is happy with the announced rules change. Stacy K. Martin, president of Southwest’s Flight Attendant Union sees this move as one of convenience for the TSA and one which leaves a very real risk in the cabin. Ms. Martin noted in a statement, "While we agree that a passenger wielding a small knife or swinging a golf club or hockey stick poses less of a threat to the pilot locked in the cockpit, these are real threats to passengers and flight attendants in the passenger cabin."

No word whether snow globes are still a threat to aviation security; they do appear to still be on the banned list.