Santa Clauses are taking over a ski resort for the 18th year in a row.

It’s that time of year again, when Santa enthusiasts from all over the world will travel to the  Samnaun Ski Resort in Switzerland, dress up like Santa Claus, and compete to be the best team of Santas in the annual and beloved Santa World Championships, or “ClauWau,” as it is officially called. This year, the event is taking place on November 24, and as always, honors the opening of the winter ski season at Samnaun in the most hilarious way possible. 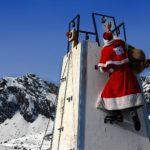 Quite simply, the goal of the event is to search for the best team of four Santas and crown them the prestigious title of “Santa Claus World Champions.” This event has been taking place annually since the year 2000–that’s 18 years of Santas racing each other to climb up makeshift chimneys, cruising down snowy hills on snowmobiles while picking up presents on the ground with a long stick, and running up a snowy hill in skis. Or, more simply put: the greatest thing you could ever imagine.

If you think you deserve the title of Santa Claus World Champion, there’s still time to register for the event via the Samnaun Ski Resort’s website (and check out last year’s rankings). If you don’t wish to compete for the title, but still wish to travel to Switzerland to watch a bunch of Santas all get into one large Santa hat together and run across the snow (actual past event), you’re more than welcome to attend the event as a spectator.

If you can’t make it to Switzerland by November 24, don’t fret! Here are several other Santa-related events happening around the world that may be by you.

Santa surely goes surfing at plenty of events in Southern California, but this particular tradition, held annually by The Ritz-Carlton Laguna Niguel at Salt Creek Beach, is special. The Surfing Santa Competition raises money for Surfers Healing, a group that helps better the wellbeing of people living with autism by teaching them how to surf. The competitors will don Santa suits and surf for a good cause the weekend before Thanksgiving.

Breckenridge’s Race of the Santas

The Lighting of Breckenridge and Race of the Santas is a yearly event held during the first week of December, transforming the town into a holiday wonderland. Santas race down Main Street, there’s a holiday dog parade, and the town is lit up with lights that sparkle throughout the streets. You still have time to register for the race, and there’s plenty of lodging offers available for Breckenridge’s winter events.

Santa himself will march down the streets of Niagra Falls this Saturday, and you are more than welcome to view him do so. There will be floats, bands,and jugglers, and Santa will be doing a meet-and-greet at City Hall immediately following the parade, if, perhaps, you need to speak with him. The parade begins at 11 am, and tickets are available online.

2018 New Orleans Running of the Santas

This particular Santa competition is not for kids, as its main draws are the many drink specials available. The Santas will run from the “South Pole” (a sports bar called Manning’s) to the “North Pole” (a venue called Generations Hall). In this case, the North Pole and the South Pole are only a few blocks apart, so don’t worry, there’s more drinking involved in this event than actual running. Tickets are available here.

When: All throughout December

Not surprisingly, the holidays are a big time of year for the town of Santa Claus, Indiana. The city of Santa Claus will live up to its name by hosting the Santa Claus Christmas Celebration, which will consist of three whole weekends of Santa Claus related occasions all throughout December. There are a whole bunch of events planned, including a Christmas Dinner with Santa, weekly chestnut roastings, and (of course) a parade. There’s also a 22-foot tall statue of Santa Claus for you to observe.