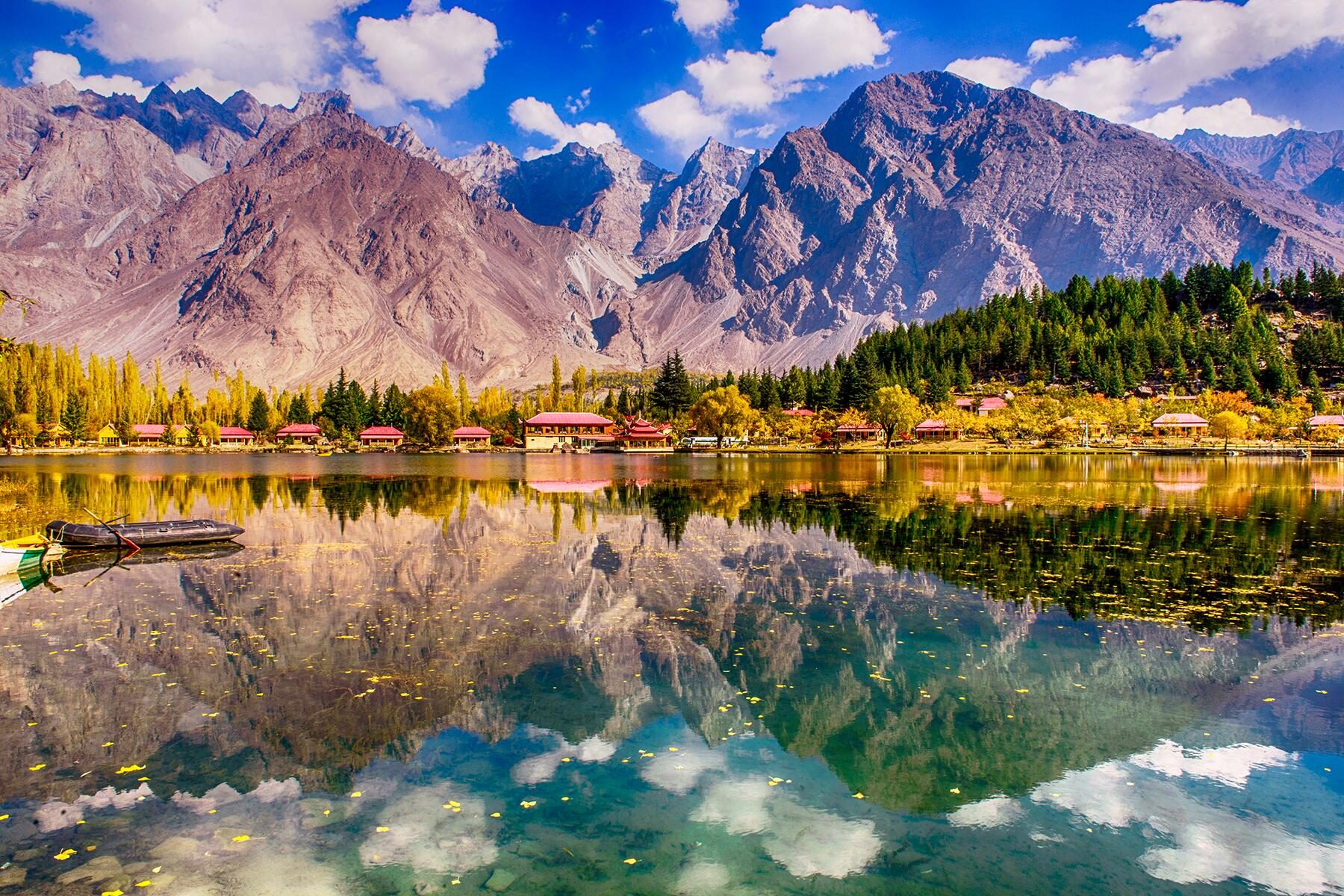 How to experience one of the Middle East’s most unexpected adventures.

A trip to the desert of Wadi Rum is an experience full of dust storms, deadly snakes, and incredible stargazing—ingredients to make up an epic desert adventure. My journey began at Al Zawaideh, a desert camp at the edge of Wadi Rum where I waited with a few other photographers for G Adventures to take us deep into the scorching hot desert. Through the heatwaves in the distance, three pick-up trucks approached our camp. 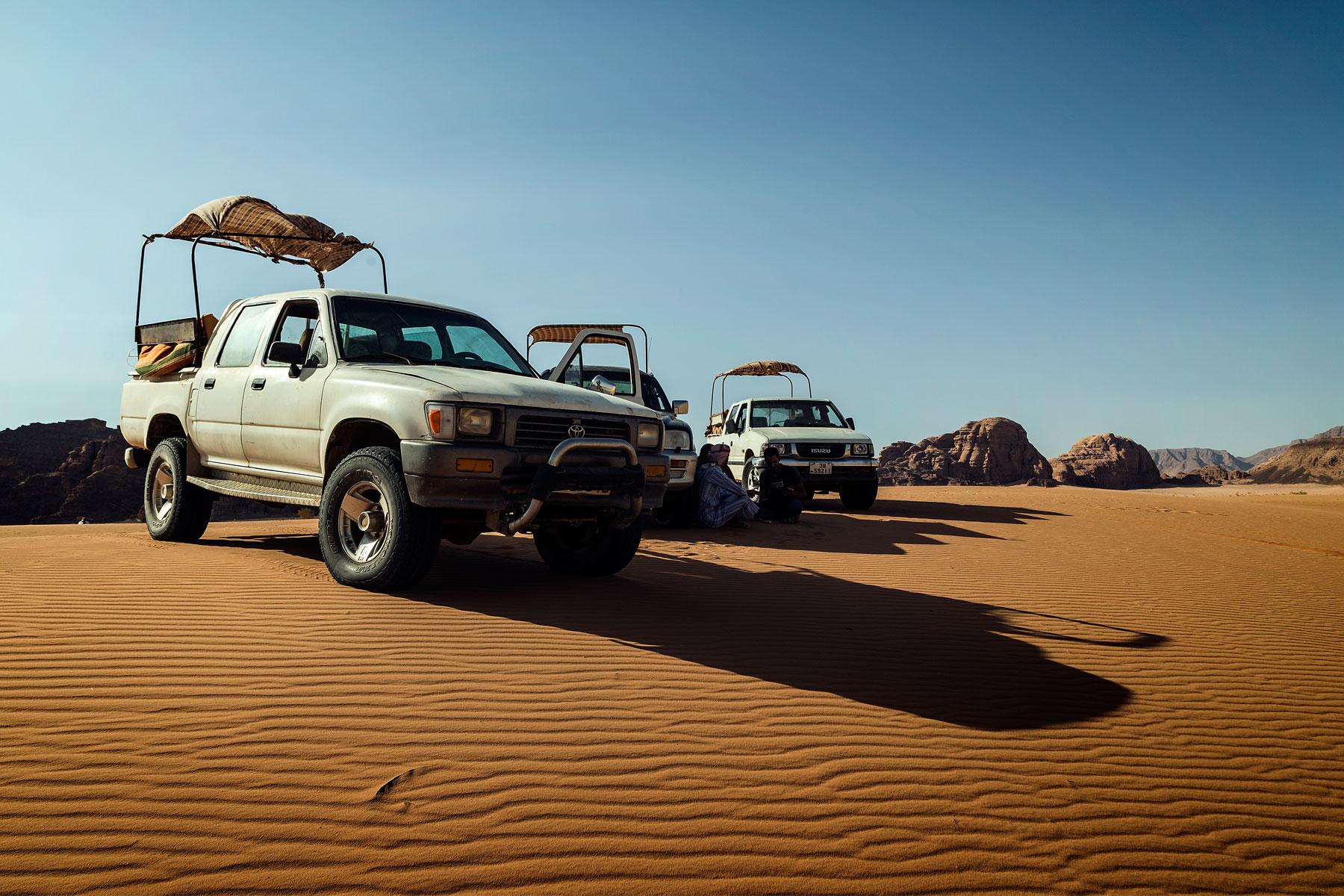 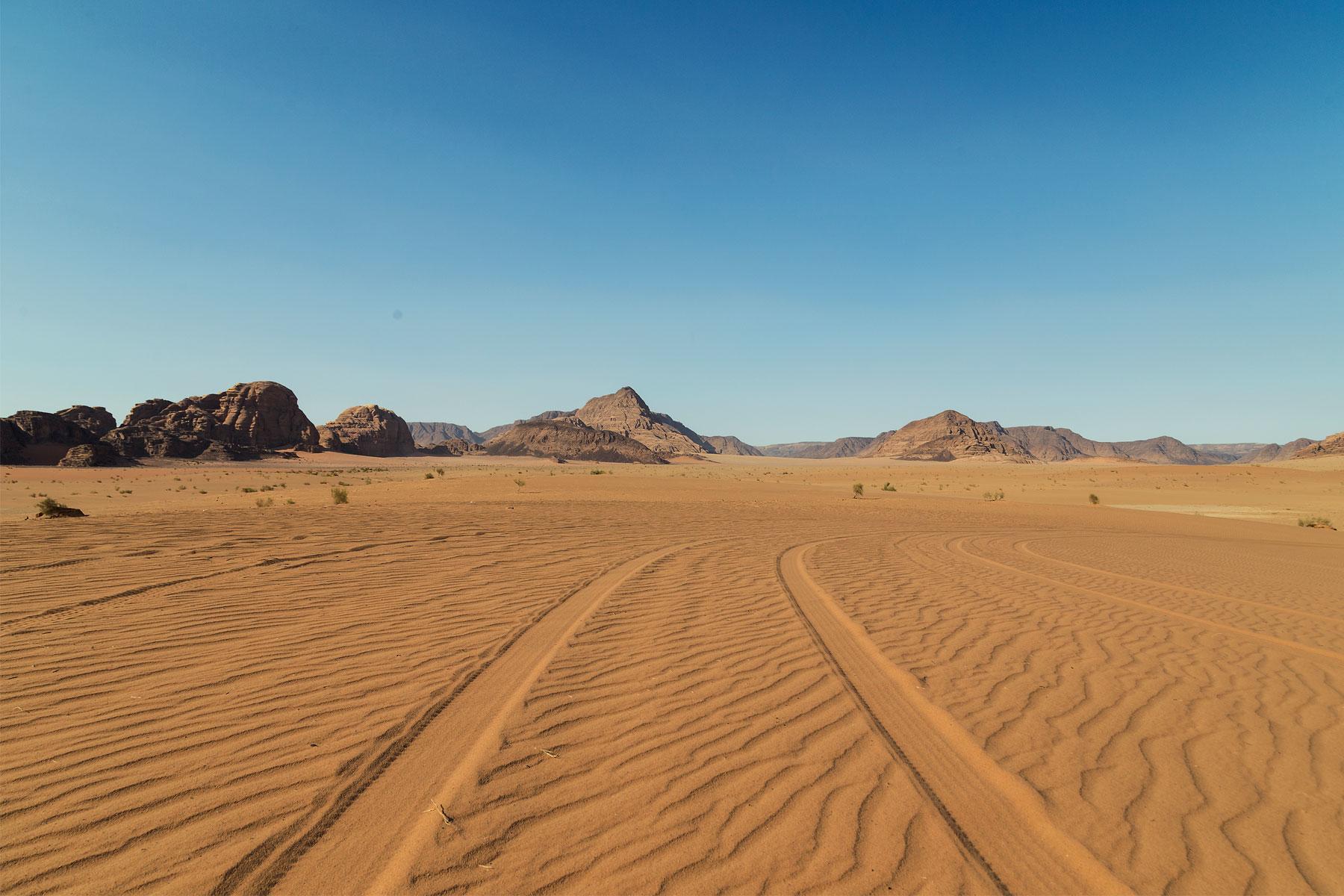 I hopped into a truck bed, raring to go. But off-roading through the desert was already off to rocky start. The truck wouldn’t start as our driver tried to turn the engine over again and again. We were ordered to get out and push and so we did; pushed until the engine turned, chased the damn thing down, and jumped back into the truck bed as it rolled along. Our adventure into the deserts of Wadi Rum had begun.

Trip Ideas Elen Turner The Most Beautiful, Otherworldly Places Across the Himalayan Mountains
Continue Reading Article After Our Video

Wadi Rum is famous for a few reasons: The desert served as T. E. Lawrence’s base during the Arab Revolt; Matt Damon spent an egregious amount of time trying to grow potatoes in Wadi Rum as the set for the movie The Martian; and it even acted as the backdrop for a small moon in Star Wars: Rogue One. It makes sense that Wadi Rum is also known as the “Valley of the Moon.”

The wind and trucks kicked up sand as we cruised, and although the landscape is insanely vast, we began to lose visibility. The sky grew hazier as the day moved on. At sunset, the dust in the atmosphere reflected the light, saturating the colors and leading to a Star Wars-level sunset of epic proportions. We were like Luke Skywalker on Tatooine. We pulled the trucks over and found a good vantage point atop a rock formation. It’s amazing how vast the sunset is in the desert, a panorama of fiery color. Unobstructed by mountains or manmade buildings, the view humbled me. As dusk set in, the entire desert was cast in serene blue. 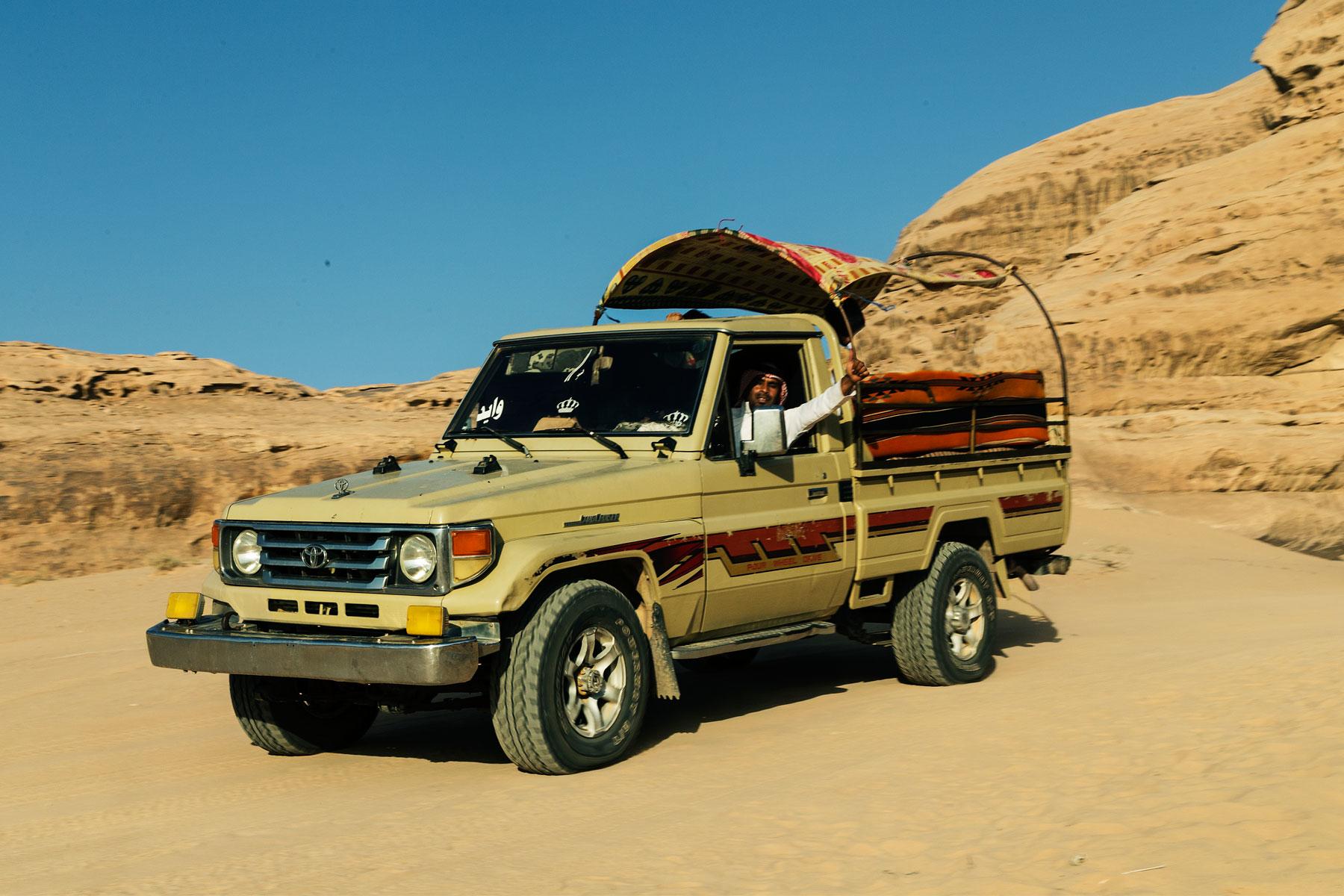 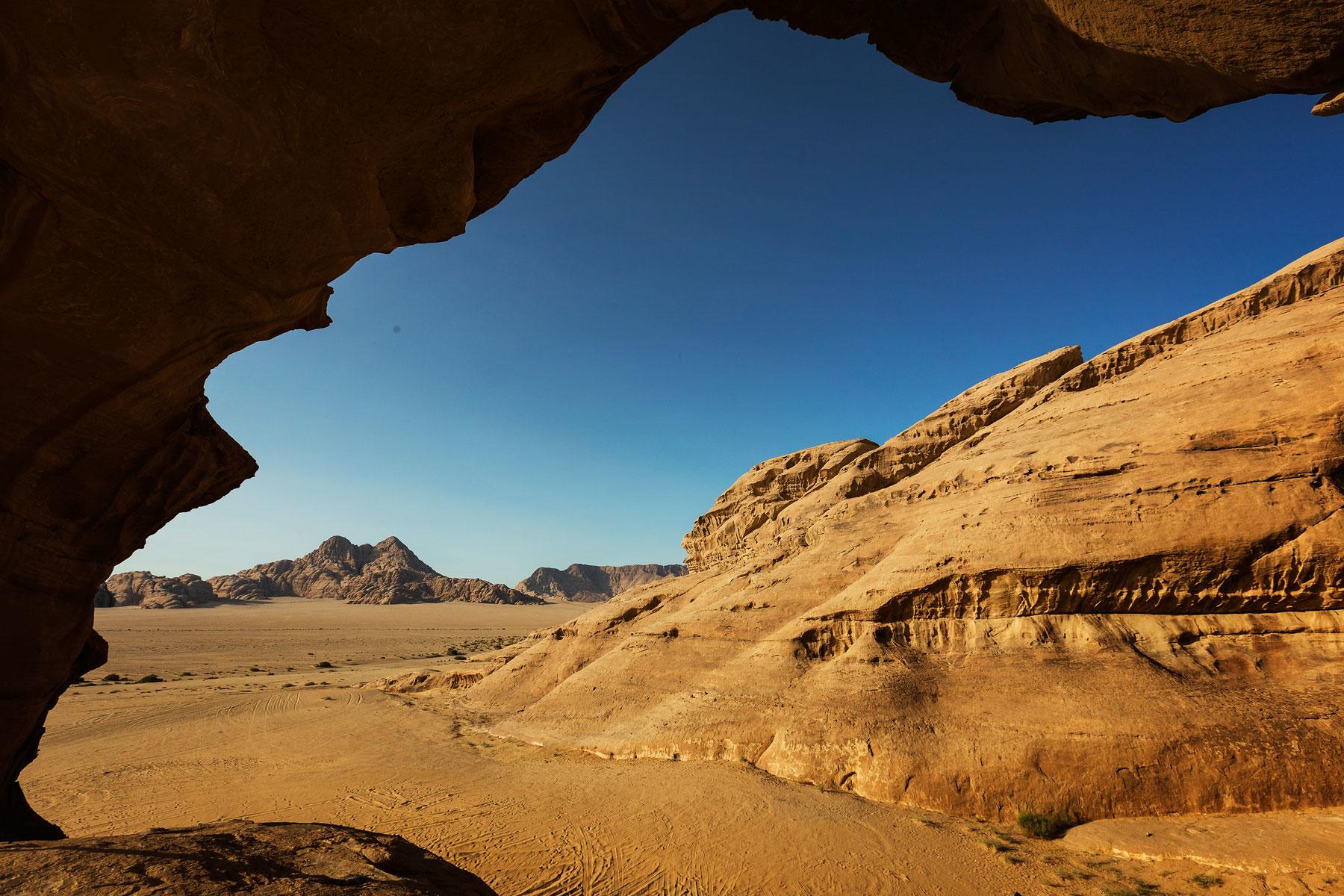 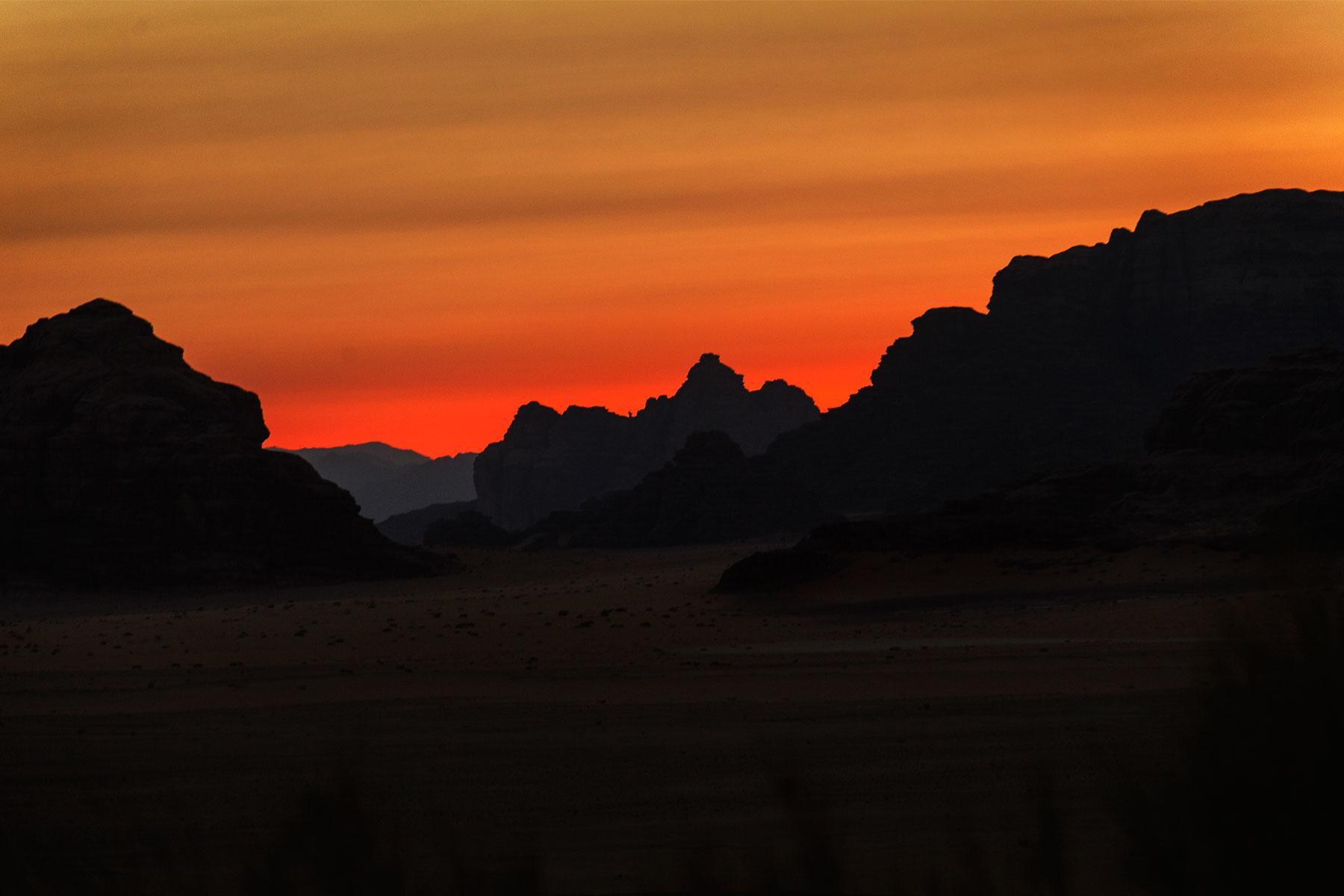 After sunset, we arrived at the desert camp. Our hosts, Isam and Sami, welcomed us into the camp: a set of tents and semi-permanent structures positioned against the back of a rock pillar intended to protect us from the wind and sun. Isam is a Bedouin, and member of the Alzawaydeh Tribe, a branch of the Huwaytat Tribe. Isam’s ancestors fought bravely against the Ottomans at the end of the 19th century, and likely fought alongside Lawrence of Arabia in World War I during one of his many campaigns in Wadi Rum.

Isam and Sami ushered us around to the back of the campsite. Sami brought us to a mat on the ground and pulled it away to reveal a submerged metal vessel—the container for our dinner. 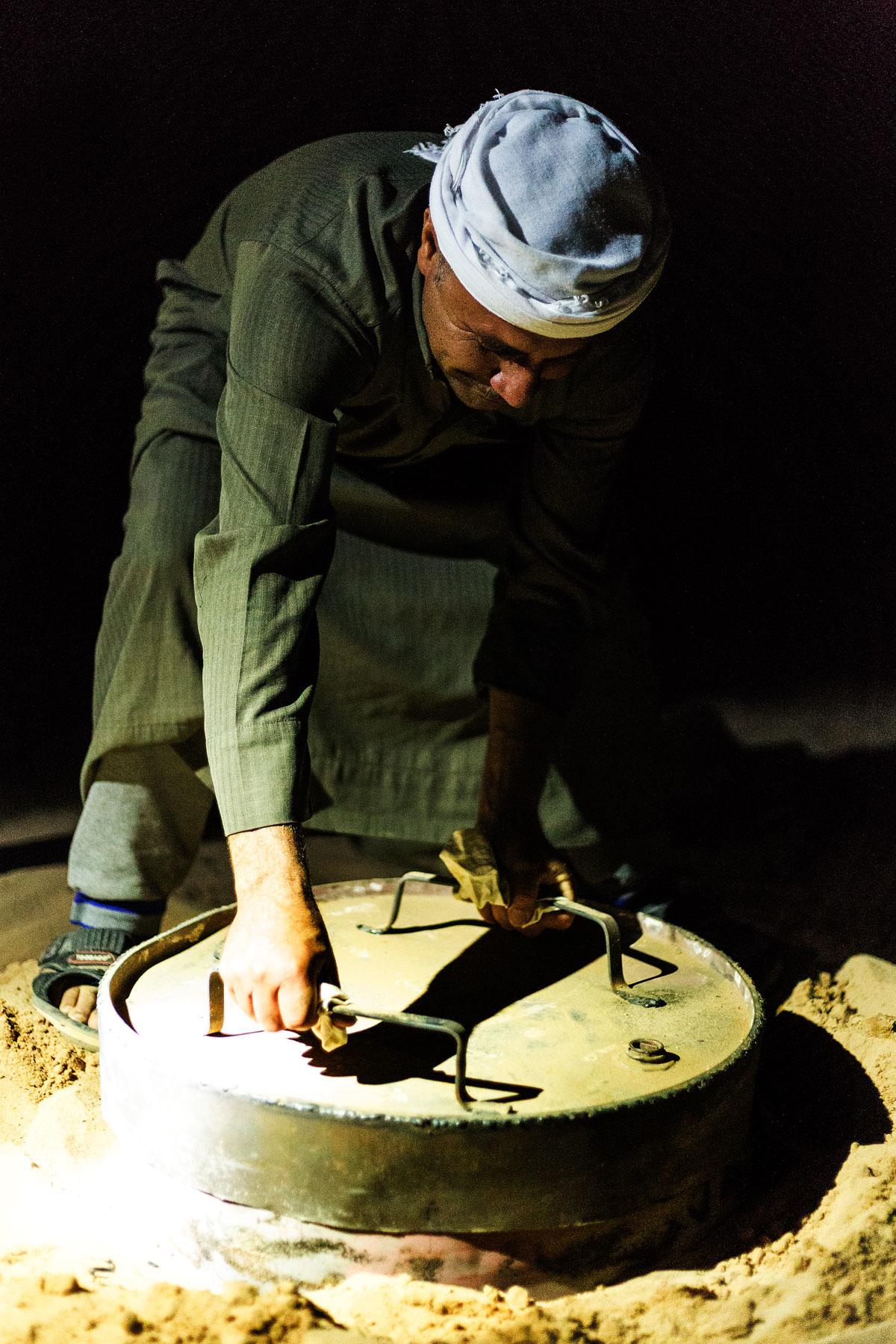 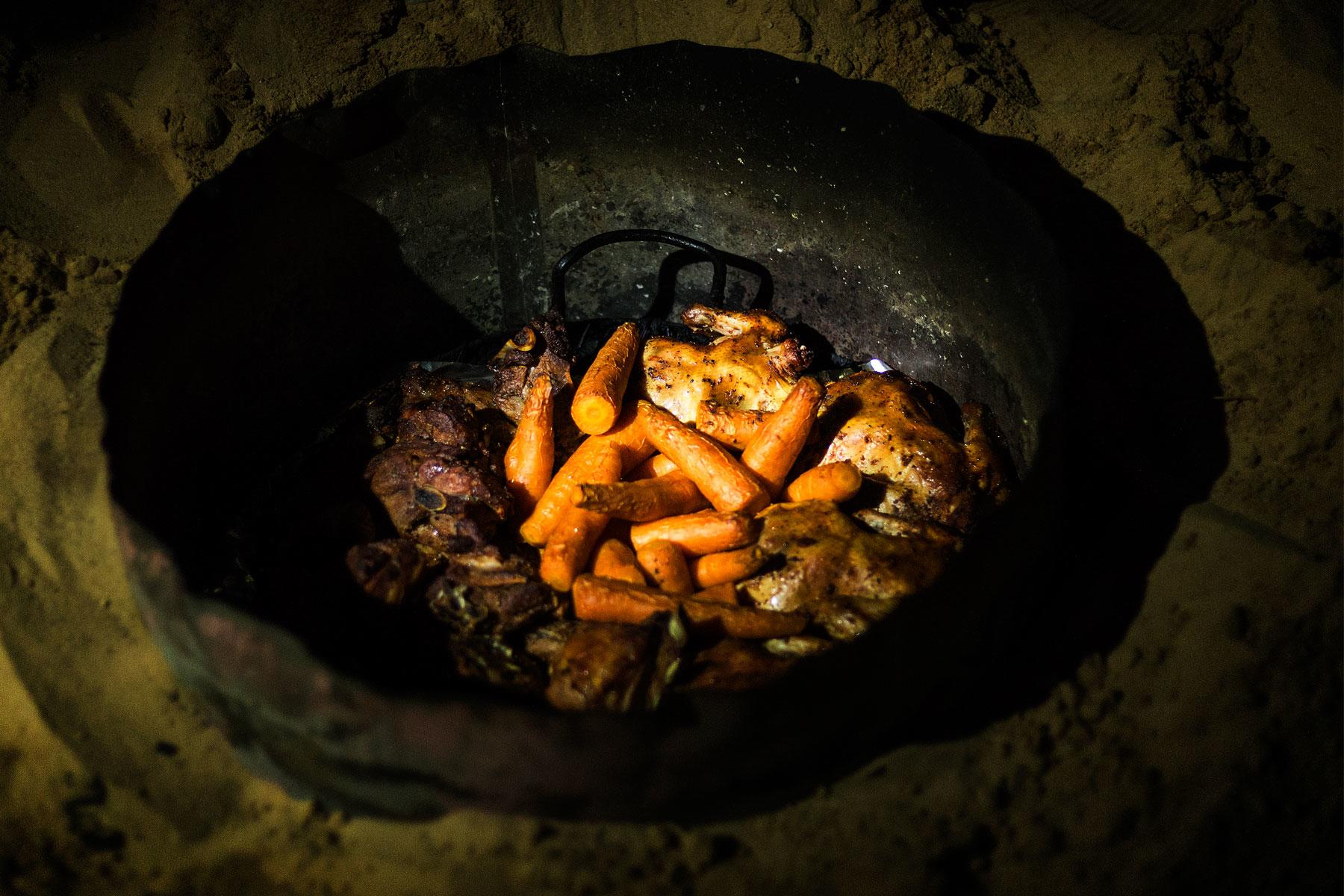 To make Zarb, or as some call it, Bedouin barbecue, one must first dig a hole and build a fire in it. You can cook Zarb using chicken or goat, but Isam and Sami prepared lamb. The meat was seasoned with lemon, garlic, and salt and placed on the top of a metal rack. From there it was lowered into the hole and covered. Without refrigeration in the desert, there’s no long marinating period. The lamb was left to cook underground for hours (usually 3-5 depending on the size of the dish). Slow cooking the lamb underground gives it an unbelievable tenderness. The rice and vegetables that cooked underneath the lamb absorbed all the delicious oils and fat raining down from above.

After dinner, Sami brewed us some tea as we sat around the campfire exchanging tales of our travels. When we finished our meal and stories, a few of us ventured outside the camp to get a better look at the stars. Without any light pollution, the night sky was perfectly clear. The moon was so bright we didn’t need flashlights. It illuminated movement on the ground: an Arabian horned viper, one of the deadliest snakes in Wadi Rum. We stopped dead in our tracks, as did the viper. A standoff.

While we were busy debating how to avoid this thing, the viper made a move in our direction. We backed away at the same pace the snake approached us. It veered right and plunged into a snake hole where we had been standing moments prior. After that, we decided to stargaze from inside our camp.

We returned to set up our cots. Next to one of the cots was a healthy looking camel spider. Camel spiders aren’t poisonous, but this one was as big as my hand, and they can run about 10 miles per hour. In fact, camel spiders are so spine-tinglingly creepy they are often pitted against scorpions in underground insect fights (yes, that’s actually a thing). We grabbed our cots and hightailed it out of the tent. 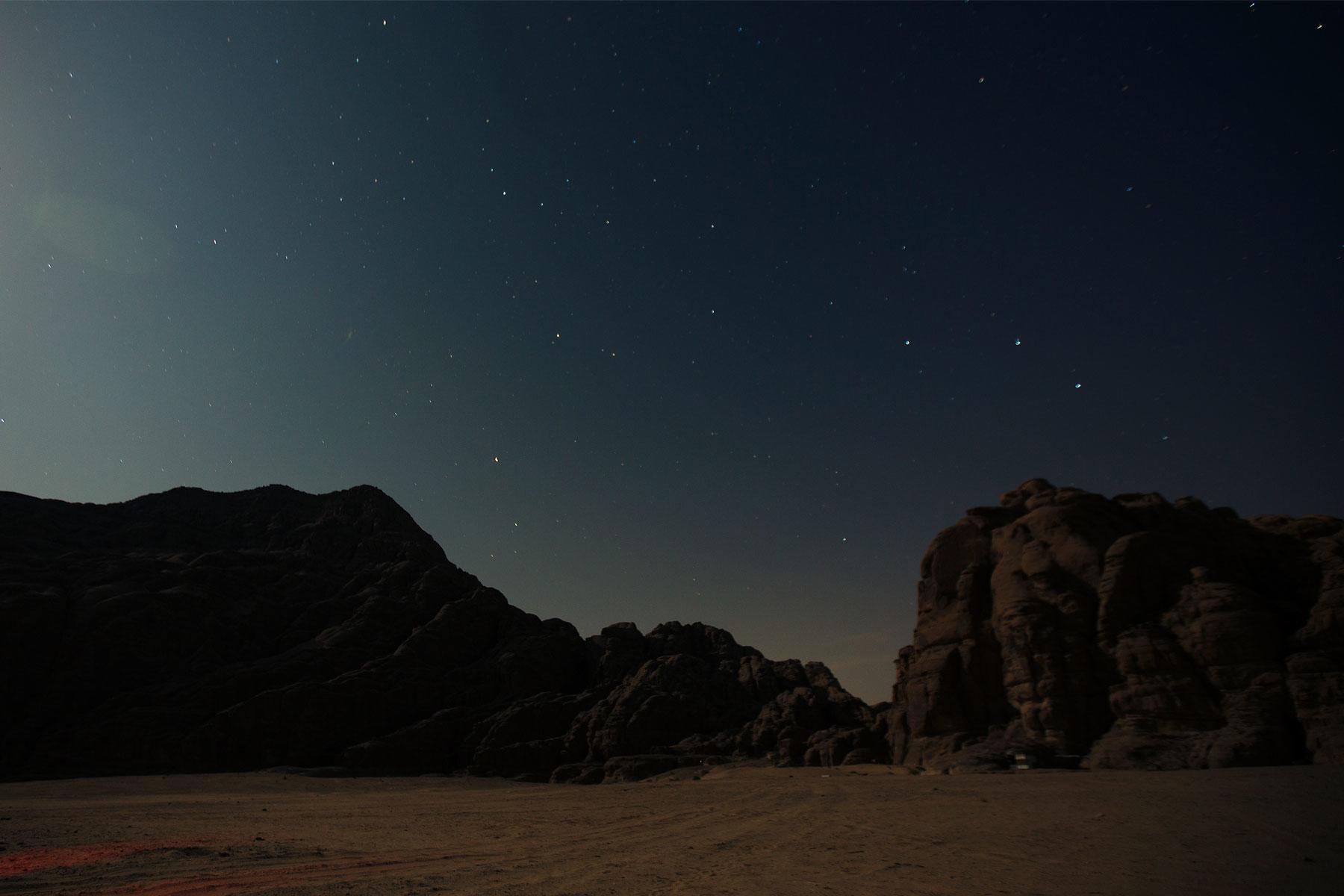 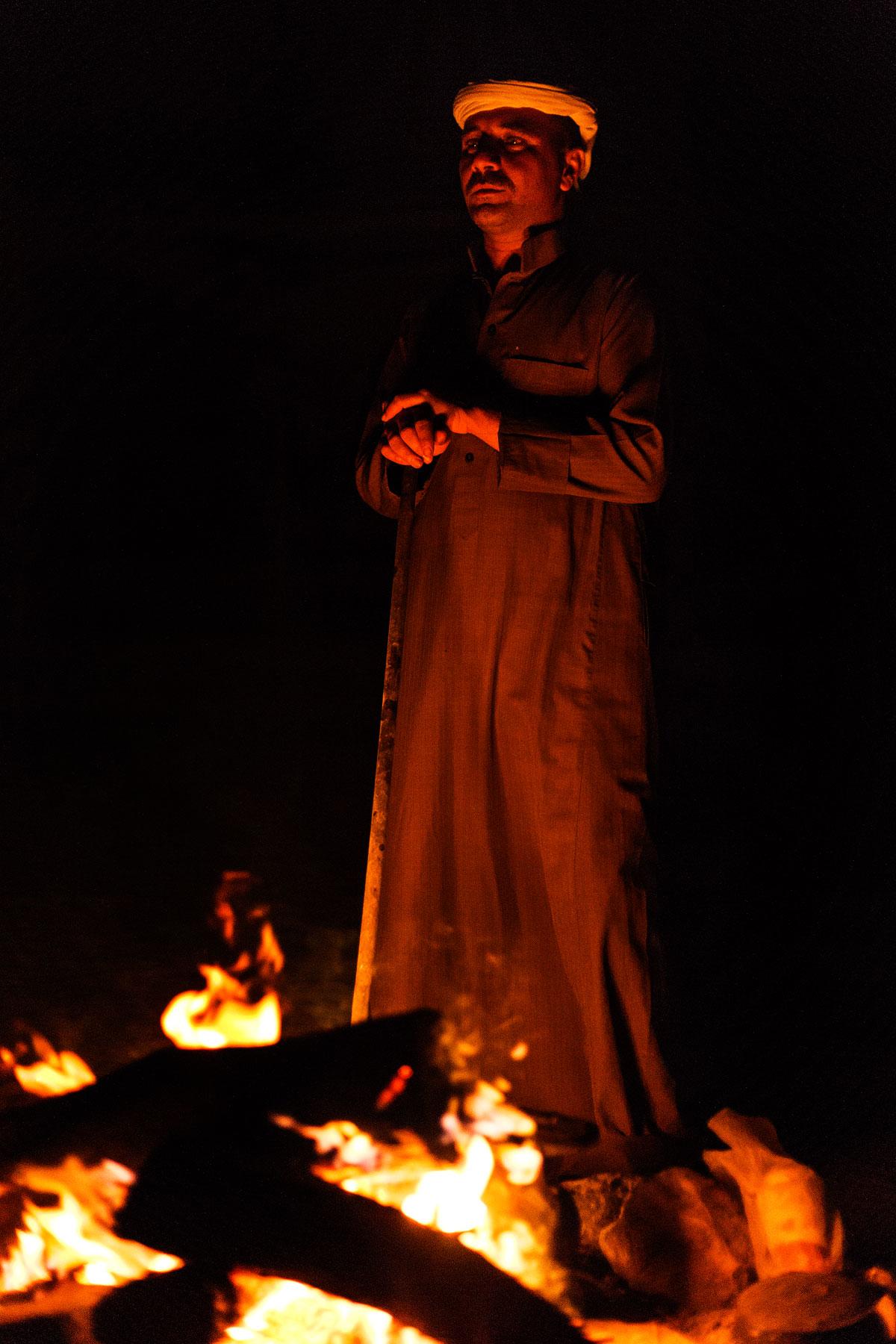 Now that I had encountered viper and spider, I had to do my best to try and sleep. In the desert, the most dangerous animals (scorpions and spiders) will seek shelter inside tents, as we had just witnessed, and so graciously followed the advice to sleep outside where it’s safer. I made my bed, checked for any desert dwellers, and got in. The desert air was perfectly cool, and we were protected from the wind by the rock formation. The howls of wind and stray dogs in the distance floated through the otherwise silent night.

From under the covers, the view was like nothing I had ever seen before. But even with the draw of the glittering night sky, it wasn’t hard to fall asleep—adventuring is exhausting, exhilarating, and totally worthwhile.