News Tina Charisma 'Regenerative Travel' Is the New Buzz Phrase, but What Does It Mean?
Home  >  News   >   Travel Tip: Make a delicious detour at this Long Island farm stand 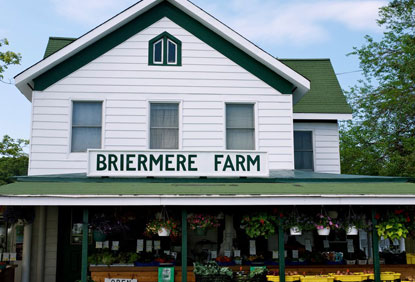 Summer arrives with a bounty of brightly colored fruits and vegetables. Personally, we here at Fodor’s enjoy our fruit covered in pastry and baked to a golden brown, just like grandma used to make. But if Grandma happens to be busy in Zumba class, turn to the baked goods at Briermere Farms.

Since 1960, the McCombe family has been running Briermere Farms in Riverhead, New York, on Long Island’s North Fork. And for nearly as long, they’ve been using the fruits of their labor to make and sell pies, breads, muffins, and other baked goods to salivating locals and visitors from a (seriously) tiny shop attached to their main produce stand. Pies in particular are the draw here, and only in-season fruits, most from Briermere itself, are used to pack those pastries. (Were you to pass by the farm stand with no clue of the pies within, it would look like many others along this stretch of road.)

Clark McCombe, whose grandmother first started making baked goods on the farm in the 60s, recommends the seasonal pies. Right now, he says, go for the berries – blackberries and blueberries stuffed into homemade crusts until they nearly burst. In July and August, when peaches come in, peach pie is the order of the day. The McCombes update their seasonal pie list on their website, so check before you head out. And if you have any room in the car after the pies, live a little and toss some fresh fruit, veggies, and herbs in there.