Coronavirus Johanna Read Coronavirus Outbreak: Should You Cancel a Trip to Europe?
Home  >  News   >   Travel Tip: Hit an Outdoor Clambake at The Place in Connecticut

Travel Tip: Hit an Outdoor Clambake at The Place in Connecticut 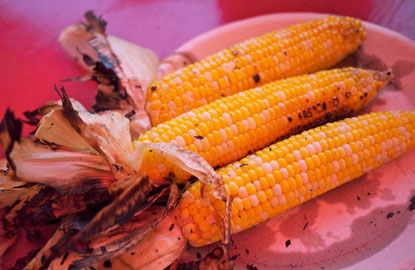 Whether you’re taking a road trip down Route 1 this summer, or just doing a quick errand, consider making a pit stop at The Place right off the highway in Guilford, Connecticut. This rather nebulously named roadside restaurant has been serving roasted clams al fresco since the 1940s. Since 1971 The Place has been owned and operated by Gary and Vaughn Knowles, who augmented the menu (a monolithic wooden structure looming over their bright red picnic tables) to include lobster, shrimp, bluefish, catfish, steak, and roasted corn among other delectables. The clambake, originally called Whitey’s by its first owner (named Whitey), now takes its name from one of Whitey’s favorite sayings:

"There’s no place, quite like this place, anywhere near this place, so this must be The Place."

The food, especially the signature roasted clams, have made a name for themselves in the region, even being included in Brooke Dojny’s The New England Clam Shack Cookbook. The clams are roasted to perfection on an 18-foot-long fire pit. Even Martha Stewart is a fan–having found the place in the 1960s, she revisited it in 2009 and blogged about it, noting that very little had changed since her first meal there.

They invite guests to class up their meal (should they not like the camp-like picnic tables) with amenities from home, like tablecloths, candles, and, of course, adult beverages. As the menu is a la carte, diners can even bring their favorite side dishes from home. Anything to make this place, The Place, feel like home.

The Place, located at 901 Boston Post Road (Rt. 1) in Guilford, is open from late April through October (weekends only in October). See their website for hours and directions. Cash or check only.