In March, I was fortunate enough to be one of the 20 travel/tech journalists Sony Electronics invited out to Sedona to test their new camera line. They handed us each a memory card and, as we canvassed the gorgeous terrain, we swapped them in and out of several cool cameras. Naturally, it was fun touring such a beautiful area via hiking trails, Jeep, and helicopter. But more importantly, this forced me to push my limits as an amateur photographer. After all, it’s one thing to know a camera’s specifications and another to find out first-hand what it can do.

Although these images were cropped to fit this column, they weren’t edited or retouched beyond that. These shots should not only (further) inspire a summer trip to the Southwest, but also give you even more of an appreciation for what digital cameras can do. If you’re looking to buy, hopefully one or more of these features will help inform your purchase. And if you’ve already got one you like, hopefully this will help inspire you to delve deeper and bring out your inner photographer. 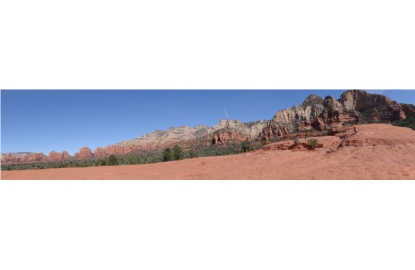 Why it’s Cool: Other in-camera panorama functions have you line up two on-screen symbols, as a marker for where it’ll digitally stitch together the photos. The problems are that the starting and stopping can result in different lighting throughout the panorama, and it doesn’t always line up well. Sony’s version has you sweep across nonstop, resulting in one fluid shot—in either 2D or 3D.

Tips: While the perennial panorama is shot side-to-side with the camera horizontal (as in the above shot, resulting in about 2 1/2 regular-sized images stitched together), this camera lets you hold the camera vertically or horizontally and sweep up-and-down or side-to-side in either direction. That versatility is key in capturing landscapes and other large scenes. 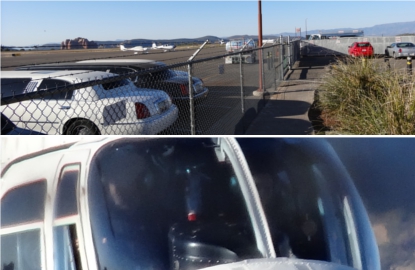 Why it’s Cool: This camera’s base zoom is an already impressive 20X. Then Sony adds their digital magic to double that to 40X. Whereas most digital zooms are pretty blurry and useless, here it lets us see into the cockpit of helicopter way far away. Zoomed back, it was tough to even see the helicopter! (Follow from the right of the two planes towards the center, squint your eyes, and you may spot it as a little blip.)

Tips: To compare apples to apples when shopping for cameras, focus mainly on the optical zoom specification—5X is fairly standard for the average point-and-shoot. When you find one like this with longer range, be patient when shooting. That extra distance means you need to be very steady. It took three tries to get this shot I wanted. 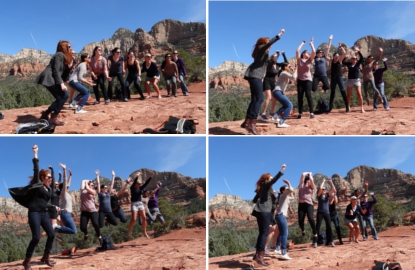 Why it’s Cool: This camera can shoot continuously at about 10 frames per second. That should be plenty for normal action in the wild…such as a bunch of journalists jumping into the air! Once you’ve captured your burst, tilt this camera during playback and it’ll scroll through the series of stills as a sort of interactive slideshow.

Tips: You may be able to activate burst mode right from your camera’s navigation pad. (Look for a little icon that looks like a stack of papers.) But before you go too burst-crazy, you may want to adjust the maximum number of shots per second. Fewer shots means fewer chances to catch that definitive moment, but also that you won’t fill up your memory card quite as quickly. Likewise, be sure to deactivate burst mode when the action’s done, so you don’t take 10 of everything! 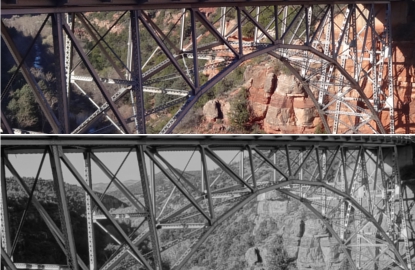 Why it’s Cool: Colors can be distracting. Avoiding them reduces us to the essentials: contrasting light and dark features. It adds a certain level of authenticity to portraits. And most importantly, it brings out the grandiosity of landscapes by making them look more Ansel Adams-y.

Tips: Find a strong subject that stands out as light or dark against a contrasting background. In the colored version above, notice how the shiny, shadowy bridge looks like it’s in the way of the pretty red rocks in the background. By contrast, the black and white (basically the same shot, but taken from a slightly different angle) sees a sleek and sturdy steel bridge, with a picturesque backdrop lending it substance. 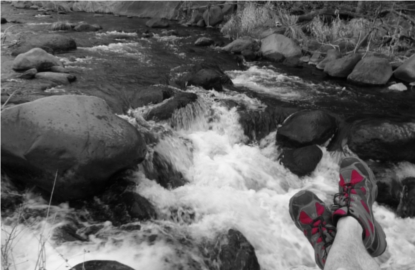 Why it’s Cool: It helps a particular primary color pop out of an otherwise black-and-white photo, adding some personality. So everything that’s that color stands out in the image.

Tips: When I was taking this shot (with the WX150), the scene looked normal in the viewfinder. Whereas other cameras (such as the HX20) can show what the partial color effect will look like as you’re shooting it. Another consideration is that while the WX150 automatically chose the red of my sneakers as the strong color in this scene, higher end models allow you to pre-select which color you want it to filter in. (By the way, if you like this feature, you may also want to see our recent roundup, which features a compact camera that lets you add color to certain parts of a captured image by swiping your finger around the screen.) 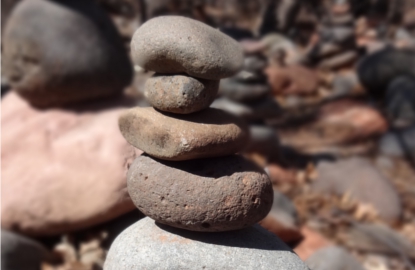 Why it’s Cool: To imitate that cool out-of-focus background previously possible only with fancy DSLR cameras, this compact camera takes two shots at once (one blurry, one regular), determines the subject and background, then combines them digitally into one snazzy-looking image.

Tips: It’s meant for close-up photography, when you’re no more than a foot from your subject. It probably would’ve worked easier here and been more striking if the foreground (one rock pile) and background (the hundreds of other rock piles tourists feel compelled to construct) were more dissimilar. Next time, I’ll try something more contrasted like a bright yellow flower against swaying green grass… 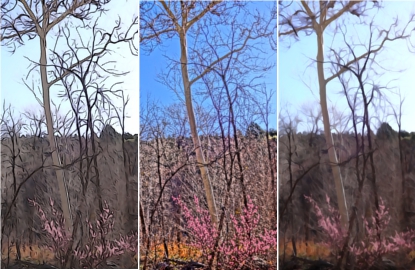 Why They’re Cool: Instead of a photo just recording exactly what you see pixel for pixel, it produces something more artistic that also reminds you of what you saw.

Tips: Experiment by shooting multiple versions of the same basic image, with different features activated. You’ll see how the gnarly, wispy branches of a sycamore stand out in HDR Painting; how the pink flowers pop in front of it with Pop Color; or how more muted, wishy-washy colors play out in Watercolor. Most of today’s digital cameras have these and other similar effects built right in. So as you take them to the places you visit, let the images take you places you haven’t yet been as a photographer.

Fodors.com Travel Technology Columnist Scott Tharler is an expert in gadgets, gambling, and travel. He’s written four books, plus hundreds of mobile and wireless tips for Sony and PC World. In addition to his daily Discovery News gadget blog, you can find links to other gadget articles, social feeds and lists of his current favorite gadgets at about.me/gadgetfans.

All photos courtesy of Scott Tharler.