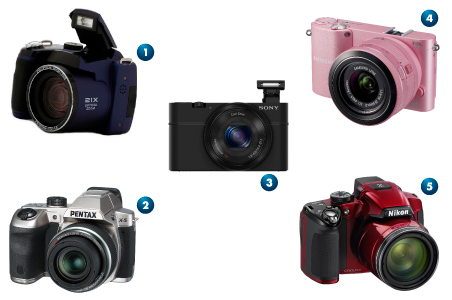 Compact cameras tend to be simple, inexpensive, able-bodied, and slip right in your pocket. DSLRs, on the other hand, involve large, expensive, heavier rigs with serious removable lenses. When you’re ready to take your digital photography to the next level but not quite ready to delve all the way, it’s time to look into a "bridge camera." These blend some of the best qualities of each, in terms of ease of use, yet an impressive array of advanced features.

Bonus: Enter below for a chance to win one of our featured cameras, the Nikon Coolpix P510!

Favorite Features: By using four AA batteries (rather than a single rechargeable), this DSLR-shaped Polaroid (and the Pentax) achieves a lower price and increased shooting time. It has a powerful 21X optical zoom lens. It features a built-in flash (that pops up manually). It offers easy access to automated panoramas and high burst shooting right on its mode setting dial. And it’s available in black, blue, or red.

Drawbacks: The zoom is a little herky-jerky, and some of the shots it produces all the way out are washed and blurry. But zoomed halfway (which is still a good amount), it captures the kind of crisp, true shots you’d expect. Also, in both panorama and regular shooting, it sometimes takes a while to process the image.

Hidden Gems: With a tap of the navigation pad, you can change the direction (left or right) of the panorama you’d like to shoot. It’s got several fun, creative shooting styles (such as extracting a particular color against black and white). And among its 27 scene selections is one called Auction that lets you shoot a series of from one to four shots to go into a single preformatted collage.

Favorite Features: This one’s styled to look a lot like a DSLR, down to the rubberized lens grip and plastic ridges that make it appear as though there’s an adjustable, removable lens. More importantly, this bad boy feels the most natural and solid of the bunch, in terms of its grip and weight. Like the Nikon, it has both a tilting screen and electronic viewfinder. And its 26X optical zoom is both fast and smooth.

Drawbacks: The physical controls seem somewhat cluttered and confusing. For instance, where other cameras integrate those functions into the navigation pad, this camera has separate display and brightness adjustment buttons. The mode setting dial is redundant, with a superfluous movie mode in addition to the nearby video record button. And that same mode dial’s also crowded, with several scene selections on it. But we suppose that could potentially be a good or bad thing, depending on how often you use that dial or those modes.

Hidden Gems: The Pentax features a bunch of cool editing options. Of course, you can rotate and crop images, but you can also stretch them, edit red-eye, add a border, make them into a collage, even add creative color filters and special effects after the fact. It also offers extensive drive capabilities, with single shots, two levels of burst shooting, two lengths of self-timer, and one that shoots three shots with different lighting exposures.

Favorite Features: As much as the Pentax looks like a DSLR, this one looks like a compact. Actually, it basically is a compact; it just happens to have a high quality sensor the size of a DSLR. Extremely sensitive to low light, it captures beautiful shots up to 20 megapixels with a super-fast shutter. It also has a very handy control ring on the front that can adjust the focus, change special effects, or alter the sweeping panorama direction—all with an intuitive twisting motion that’s quicker and easier than fumbling through menus and then resetting your hands for the shot. In other words, for overall quality and ease of use, this one’s great.

Drawbacks: It’s pretty pricy. And as opposed to the Pentax, it feels the least natural in the hands. It’s slippery. It has a fairly flush shutter button, which make for a more labored shooting experience. And the battery life wasn’t as long as we’d hoped it’d be.

Hidden Gems: It’s got a built-in pop-up flash with a few thoughtful, handy flash modes. It offers lots of useful on-screen information, from contextual shooting tips to an explanation of what adjusting the control ring will do. And you can reassign the functions of the control ring, along with those of the navigation wheel as well.

Favorite Features: Unlike the Pentax, this cute little unit is quite economical with its buttons. Unlike the Sony, it fits ergonomically in your hands. And unlike any others in this roundup, it features both a removable lens and Wifi capabilities. With the free companion apps loaded on your phone and the proper Wifi settings enabled, it’s relatively easy to share images via email and your social channels, upload to the cloud, play back on a wirelessly connected TV, and transfer shots from the camera to your phone. You can also use your phone as a remote viewfinder, changing a few key camera settings and then snapping the shot with a tap of your phone’s screen. Great for tripod shots and self-portraits!

Drawbacks: Really, it’s just the price. But if you’re willing to commit twice what you might spend on a decent compact, you’ll get a whole lot of camera.

Hidden Gems: It’s quite easy to navigate the menus, in part because it does a superior job of explaining on-screen what the various settings do. (You can also turn off these informative pop-ups.) Similar to the Sony, you can change settings with a twist of the lens. It’s got a lightning-quick shutter. And it features the coolest—and quietest—sweeping panorama function we’ve seen. With the shutter held down, you simply swoop the camera left, right, up, or down, and it fills in an empty rectangle with the stitched images right as you’re shooting!

Favorite Features: Although this unibody model shares several of our favorite features from among the group—such as a versatile tilting display and vision-compensating electronic viewfinder—it stands alone with its zoom: up to 42X optical means you can bring just about any subject into range from a ways away. You can do so smoothly, by using either the familiar switch up on top by your right pointer finger, or a duplicate vertical switch on the left side of the lens. The latter forces your hands into that steady two-handed grip that DSLR users often use. It’s also a great, balanced price for all that you get.

Drawbacks: The position of the function button right behind the shutter button takes a little getting used to initially. But once we did, it was fine—in fact, it turned out to be a good thing, saving our poor thumb that much more multitasking.

Hidden Gems: Just to name a few of its many hidden gems, its control dial features a user setting that (similar to the Sony) can quickly snap back to your favorite settings, rather than having to manually jump through several menu hoops. It also has effects on there, so you can quickly get to that special creative shooting mode you like. Speaking of which, it features a dozen possible hues to use as a selective/partial color (where only that color pops from an otherwise monochrome background). And it offers a ton of drive modes, including a composite shot of 16 images and bursts of up to 120 frames per second (fantastic for high-speed action shots), pre-shooting cache mode, and one that automatically snaps a shot at one of four preset time intervals.

Award-winning Fodors.com Travel Technology Columnist Scott Tharler is an expert in gadgets, gambling, and travel. He’s written four books, hundreds of mobile and wireless tips, and dozens of freelance articles. In addition to his Discovery News gadget blog contributions, you can find links to other gadget articles, social feeds and lists of his current favorite gadgets at about.me/gadgetfans.