Coronavirus David Silverberg Are Your Kids Heading Back to Summer Camp? Here's What You Need to Know
Home  >  News   >   Europe’s Tiniest Nations

France, Germany, England, and Italy are bigger, it’s true, but there’s still plenty to say about Europe’s diminutive nations. While some of these dominions are better-known for their questionable monetary transactions than their gross national product, all have good food, lots of recreational activities, and are rich in history. Here’s a sampling of Europe’s tiniest nations, countries that make Luxembourg look like Texas. 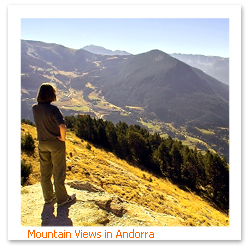 Where: Landlocked in the Pyrénees between France and Spain.
Speaks: Catalan, Spanish, French.
Size: 181 square miles, some 2.5 times the size of America’s capital!
Population: 72,822
Backstory: Andorra’s historically fuzzy story of independence began in the 9th century, when Charlemagne, after beating back the invading Moors, rewarded Andorra with independence. Since 1993 Andorra has had its own parliament, but the titular heads of state are the French president and the Spanish bishop of Urgel.
What’s to see: Andorra is not easily accessible — there are no airports, for example, only roads through high mountain passes. But it does have great views and great skiing, including Pas De La Casa, the highest mountain resort in the Pyrénees.
A Funny Thing About Andorra: With no income tax and very low taxes on goods, and not exactly open-book banking, Andorra is a hotspot for high-rolling tax evaders.

Where: On the French Riviera, between Nice and the Italian border.
Speaks: French, Monegasque (a combo of French and Genoese Italian).
Size: At 0.8 square miles, Monaco is 1/169th the size of the late Princess Grace’s hometown, Philadelphia. (Why ever did she move?)
Population: 32,671
Backstory: The Grimaldi family, of Genoese descent, has ruled Monaco as an independent nation since 1297, with a few 19th-century interruptions. The country, from its earliest days, has been something of a tax haven, attracting wealthy folk. It has also been synonymous with yachts, jet-setting gamblers, and the Grand Prix Monaco.
What’s to see: Monaco advertises itself as a mecca for the rich and famous, and Monte Carlo, its government-owned casino playground, no doubt loves to empty their pockets. The Mediterranean climate, with its port, steep hills, narrow streets and James Bond intrigue, all conspire to make you feel tres chic. For a break from that, visit the Jardin Exotique de Monaco.
A Funny Thing About Monaco: Prince Albert, sovereign of Monaco since 2005, started the Monaco bobsled team, and personally competed in the Winter Olympics four times. The last time he led the team, in 2002, he finished upside down. 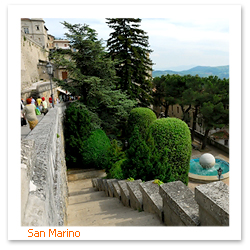 Where: Northeastern Italy, on Mount Titano, near Rimini.
Speaks: Italian.
Size: 24 square miles. By comparison, the planet Jupiter is 24,007,700,000 square miles (over 1 billion times larger), but San Marino has a more enviable climate.
Population: 29,615
Backstory: Sure, it’s Europe’s third-smallest country but it may also be its oldest. A stonecutter named Marino and a band of Christians settled here in the 4th century and called themselves Sammarinesi. Over the centuries its position high on a cliff seemed to deter marauding Italian city-states from conquering it.
What’s to see: Three towering medieval castles perched on sheer cliffs overlook the Italian countryside to the Adriatic. It’s a good day trip from Rimini to this country of winding cobbled streets, soldiers in green uniforms, tourist shops, and dramatic views.
A Funny Thing About San Marino: Firearms, fireworks, and other illegal-in-Italy products are available here for the buying.

Where: Along the Rhine, slipped between Switzerland and Austria.
Speaks: German and Alemannic dialect.
Size: At 62 square miles, it’s like Bermuda, without the ocean.
Population: 34,247
Backstory: The last remnant of the Holy Roman Empire, Liechtenstein was founded in 1719 by Johann Adam van Liechtenstein, an Austrian prince who bought the land from some down-on-their-luck counts. Today Liechtenstein is a constitutional monarchy.
What’s to see: Accessible by car and train, mountainous Liechtenstein has great views of the Alps, flowering alpine fields, a good network of hiking trails, and countryside roads for biking and strolling. Vaduz, the capital, has some good museums, though the royal family has its art museum in Vienna.
A Funny Thing About Liechtenstein: Some 75,000 companies are registered in Liechtenstein while the populace numbers roughly 32,000. (It’s also reportedly popular with money-launderers and tax evaders.) 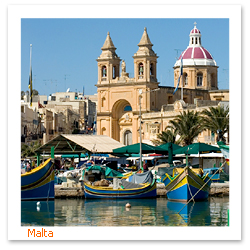 Where: A seven-island nation in the Mediterranean, south of Sicily.
Speaks: Maltese and English.
Size: At 120 square miles, Malta is the same size as Moosehead Lake, Maine’s largest lake, though with inverse geology.
Population: 401,880
Backstory: People have been calling Malta home for more than 6,000 years. Malta felt the influence of many empires through the ages, from the Romans to the French to the English. As an English colony, it was heavily bombed by the Germans in World War II, though never conquered. After some fits and starts, Malta became independent in 1964.
What’s to see: Dramatic seaside cliffs, incredible archaeological history. Unlike most of the tiny nations in Europe, Malta is a vacation destination (as opposed to a sidetrip from elsewhere). The capital, Valetta, is home to the country’s best museums and café life.
A Funny Thing About Malta: Malta has been a favorite of filmmakers since the mid-1960s. Parts of the original Casino Royale were filmed here as were scenes from The Spy Who Loved Me and Orca. Recently it’s been a popular set for epics like Gladiator, Troy, and The Count of Monte Cristo.

Where: Rome, Italy.
Speaks: Italian, Latin, German, Polish, you name it — the residents tend to be fluent in several languages.
Size: At 0.2 square miles, Vatican City wins for world’s smallest country.
Population: 557 residents.
Backstory: With the fall of the Roman Empire, it emerged as the Papal power around Rome, and much Western history ensued. Vatican City became its own nation in 1929. The Pope is the head of state.
What’s to see: Everything — the Sistine Chapel (décor by Michelangelo, among other great artists), the Vatican Museums and Galleries, St Peter’s Basilica, St. Peter’s Square, the Vatican Grottos, and on Wednesdays, the Pope. Besides the hit list of famous Renaissance artists, the Vatican also has a significant collection of ancient Egyptian, Etruscan, and Greek works.
A Funny Thing About Vatican City: Short-shorts and bare knees are verboten, so dress respectfully when visiting.