Coronavirus Esme Fox Spain Is Open to Vaccinated Tourists. So, What Can You Expect This Summer?
Home  >  News   >   A Visit to Shakespeare’s Old Globe Theatre 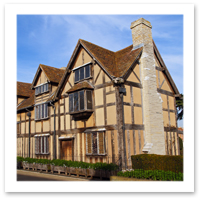 At Shakespeare’s Globe Theatre, they say the Bard does not belong to the British; he belongs to the world—as the myriad visitors to his birthplace of Stratford-upon-Avon (right) attest. Not a day has gone by since the Restoration when one of his plays isn’t being performed or reinterpreted somewhere. But at the site of the original Globe, conveniently located in London, is a painstaking reconstruction of Shakespeare’s own open-air theater, where seeing one of his plays can take on an ethereal quality.

If you are exceedingly well read and a lover of the Bard, then chances are a pilgrimage to his Globe Theatre is already on your list. But if Shakespeare’s works leave you wondering why exactly the play is the thing, then a trip to the Globe—to learn more about his life or to see his words come alive—is a must.

Consider visiting in the off-season (October to April). There may be better venues in which to see Shakespeare from a purely theatrical point of view anyway—including the Royal Shakespeare Theatre and the National Theatre according to this thread in our forums—so take advantage of the winter months to get backstage. You’ll see more of the theater and have fewer other tourists to contend with.

Shakespeare’s Globe Exhibition is a comprehensive display built under the theater (the entry is adjacent) that provides background material about the Elizabethan theater and about the surrounding neighborhood, Southwark. The exhibition describes the process of building the
modern Globe and the serious research that went into it.

Daily live demonstrations include Elizabethan dressing, stage fighting, and swordplay, performed by drama students and stage-fighting instructors from the Royal Academy of Dramatic Art (RADA) and the London Academy of Music and Dramatic Art (LAMDA).

Many performances are done in Elizabethan dress. Costumes are handmade from period materials—wool, silk, cotton, animal skins, and natural dyes. Admission also includes a tour of the theater. On matinee days, the tour visits the archaeological site of the nearby (and older) Rose Theatre. 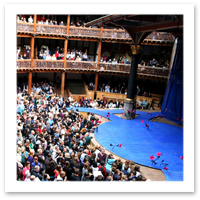 Seeing a Play at the Globe

The season of plays is limited to the warmer months, from May to the first week in October, with the schedule announced in late January on the theater’s Web site. Tickets go on sale in mid-February. The box office takes phone and mail orders, as well as in-person sales, but the most convenient way to buy tickets is online. Book as early as possible.

“Groundlings”—those with £5 standing-only tickets—are not allowed to sit during the performance (right). Reserve an actual seat, though, on any one of the theater’s three levels, and you can join the “Elizabethan” crowd.

If you do have a seat, you can rent cushions for £1 (or bring your own) to soften the backless wooden benches. A limited number of backrests are also available for rent for £3. The show must go on, rain or shine, warm or chilly—so come prepared for whatever the weather throws at you. Umbrellas are banned, but you can bring a raincoat or buy a cheap Globe rain poncho, which doubles as a great souvenir.

Give yourself plenty of time: there are several cafés and restaurants, as well as fascinating interactive exhibitions, and theater tours with occasional live demonstrations. Performances can last up to three hours.

Childsplay, a program for 8- to 11-year-olds, is held once a month during matinées. While Mom and Dad enjoy the play, children—helped by actors, musicans, and teachers—learn the background and story and become accustomed to Shakespearean language. By the time they are admitted to the theater for the last 15 minutes of the play, the children have become Shakespeare enthusiasts for life.

A regular workshop for kids, run with the Metropolitan Police, the National Archives, and the National Forensic Service, uses modern forensic techniques to solve real Elizabethan crimes and mysteries.