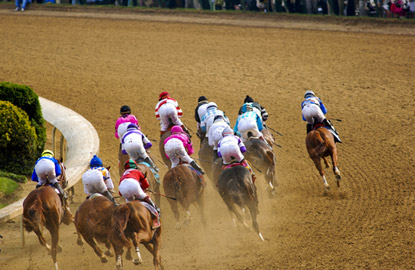 Headed to Louisville for the 138th Kentucky Derby this weekend (or wish you were)? Churchill Downs, historic host track of the annual Run for the Roses, is offering lots of new ways to soak up the thrill of sports’ greatest two minutes this year.

Kick off your day at the famous track by booking the new "Breakfast at the Spires" tour to watch Churchill’s world-class thoroughbreds train while sipping coffee, munching on danishes, and listening to guides regale you with raceday lore from the balcony of the Jockey Club, perched betwixt the landmark’s iconic twin spires. $18 per person. 8:15-9:15 a.m.

Private VIP tours of the museum itself are now on offer (24 hours notice required), but general admission grants everyone a 30-minute "Behind the Scenes" walking tour of all the track’s Derby Day hotspots, including the jockeys’ locker room, Millionaire’s Row, grandstand, and paddock (where you can pet a retired racehorse). From personal experience, we highly recommend joining a Backside tour ($20) to sneak a peek at the stables (home to some 1,400 horses) and take in a race up-close from the staff bleachers!

Since all tour prices include museum admission, don’t miss the fancy Derby hats of celebrities like Queen Elizabeth and the late Anna Nicole Smith on display, or historic race footage screened on the 360-degree oval theater. If you don’t have enough time to hit a nearby distillery, the museum’s new temporary Four Roses Urban Bourbon exhibit (open March-December) is a great mini intro to Kentucky’s native spirit, featuring a full bar with virtual displays and bourbon sniffing area.

After, head downstairs to the Derby Cafe for a taste of 126-proof Booker’s bourbon or to sample one of the signature bourbon cocktails named for a past Derby winner.

Note: Museum is open, and most tours are available, year-round, but racing season is Spring (April-July) and Fall (October-November).