Not one of the lucky few sitting stage side at the fall fashion shows this week? You can still satisfy your fix by hitting these neighborhoods for the city’s best shopping. Here are some of our top picks. 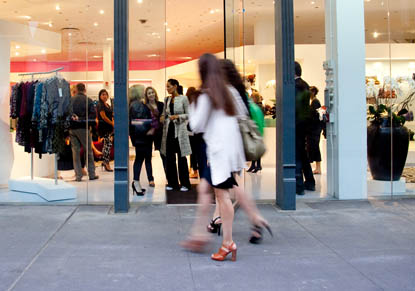 Jaded locals call SoHo a touristy outdoor mall. True, you’ll see less expensive chains such as Banana Republic and Sephora but there’s also luxury one-upmanship, with stores such as Prada, Chanel, and Louis Vuitton. But you can still hit a few shops you won’t find elsewhere, west from Broadway over to 6th Avenue, between West Houston and Grand streets and east of Broadway as well. Crosby and Lafayette each have a handful of intriguing shops.

Best for What to Wear: Prada, Kirna Zabête, Kate Spade

Shorthand for "North of Little Italy," this neighborhood has taken the commercial baton from SoHo and run with it. Like SoHo, NoLita has gone from a locals-only, to a crowded weekend magnet. But unlike its SoHo neighbor, these stores remain largely one-of-a-kind. Running along the parallel north–south spines of Elizabeth, Mott, and Mulberry streets, between East Houston and Kenmare streets, NoLita’s boutiques tend to be small and, as real estate dictates, somewhat pricey.

The greatest Italian, French, and American fashion houses form a platinum-card corridor for ladies who lunch. Most stores occupy large, glass-facade spaces but there are some exceptions housed in old brownstones or mansions. A couple of marvelous booksellers and several outstanding antiques dealers and art galleries share this address as well.

In the late 1990s the area between West 14th Street, Gansevoort Street, Hudson Street, and 11th Avenue speedily transformed from meatmarkets to old warehouses with ultrachic shops, nightclubs, and restaurants packed with angular fashionistas. Despite the influx of a few chains—albeit stylish ones like Scoop—eclectic boutiques keep popping up.

Tiny, no-nonsense clothing stores and scrappy stalls hang on to the past as funky local designers gradually claim more turf. Ludlow Street has become the main drag for twentysomethings boutiques wedged in between bars and low-key restaurants. For the full scope of this area, prowl from Allen to Essex streets, south of East Houston Street down to Broome Street.

It’s easy to feel like a local, not a tourist, while shopping in the West Village. Unlike 5th Avenue or SoHo, the pace is slower, the streets relatively quiet, and the scale small. This is the place to come for unusual finds rather than global-brand goods (well, if you don’t count Marc Jacobs). Bleecker Street has a mix of shops, but for prime-browsing hit West 10th Street and 8th Avenue, as well as Hudson Street and Greenwich Avenue.