Coronavirus Esme Fox Spain Is Open to Vaccinated Tourists. So, What Can You Expect This Summer?
Home  >  News   >   Top London Museums

London is a great city for museum-hopping, and not just because of the the colorful polka-dot shuttle boat between the Tate Britain and Tate Modern or the close-proximity of the National History Museum, Science Museum, and the V&A on South Kensington’s “Museum Mile.” Many of the city’s top institutions are free to enter so you can pop into one for just a short burst of culture, though the immense British Museum could entertain visitors for days, if not weeks. From classical antiquities to modern art, here are some of our favorites: 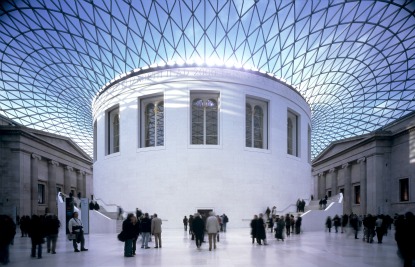 British Museum
With a facade like a great temple, this celebrated treasure house, filled with plunder of incalculable value and beauty from around the globe, occupies an immense Greco-Victorian building that makes a suitably grand impression . . . Read more.

National Gallery
Standing proudly at the top of Trafalgar Square is one of the world’s best art collections. The gallery fills the north side of the square, with Nelson’s column in the center, with more than 2,300 masterpieces on show, for free . . . Read more.

National Portrait Gallery
A suitably idiosyncratic collection that presents a potted history of Britain through its people, past and present, this museum is an essential stop for all history and literature buffs, where you can choose to take in a little or a lot . . . Read more

Natural History Museum
The outrageously ornate terra-cotta facade of this enormous Victorian museum is strewn with relief panels, depicting living creatures to the left of the entrance and extinct ones to the right. It’s an appropriate design, for within . . . Read more.

Science Museum
This, the third of the great South Kensington museums, stands next to the Natural History Museum in a far plainer building. It has loads of hands-on exhibits, with entire schools of children apparently decanted inside to interact . . . Read more.

Tate Britain
Although the building is not quite as awe-inspiring as Tate Modern, its younger sister on the south bank of the Thames, Tate Britain’s lovely, bright galleries hold only a fraction of the Modern’s crowds, making it a pleasant, hands-on . . . Read more.

Tate Modern
A working power station from 1947 to 1981, this hulking monolith of a building was all but derelict when the Tate adopted it as the home for their modern art collection in the late ’90s. And what a magnificent transformation it has been . . . Read more.

Victoria & Albert Museum
Always referred to as the V&A, this huge museum is devoted to the applied arts of all disciplines, all periods, and all nationalities. Full of innovation, it’s a wonderful, generous place to get lost in. First opened as the South Kensington . . . Read more.