News Ronny Maye Should You Cancel Your Vacation to an Area Impacted by a Natural Disaster?
NewsTop Chef Travels with Mario Batali 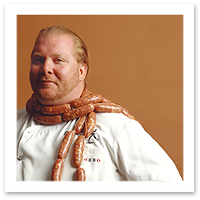 As owner of acclaimed restaurants across the country—including the award-winning Babbo Ristorante e Enoteca, in New York City, and his latest venture, Carnevino Italian Steakhouse, in Las Vegas—Mario Batali has dedicated his career to perfecting and promoting the cuisine of his ancestors.

Fodor’s recently spoke with Batali about Bologna, his favorite Italian city, which he visits approximately two to three times a year. Here are a few of the things he loves about this top culinary destination, including the best places to eat, stay, and eat some more.

Fodor’s: Bologna is known for all types of great food. Do you have a favorite place to shop for cured meats?

Mario Batali: Yes, Tamburini– without a doubt, the best deli in the city. It’s a giant place filled with all kinds of cured meats, and they also have a beautiful cheese counter. I try to taste something called culatello, which is kind of the heart of the prosciutto. It’s made in Zibello, which is right near there and it’s not imported to America. I taste two or three different ages of that and end up bringing a couple pounds of it back. [Tamburini] is also one of the best places to try Parmigiano-Reggiano.

You’ll see a lady in the window hand-making tortellini every day. You can buy the tagliatelle, tortellini, tortelli; all of the great hand-made pastas are made right there. They also have a beautiful display of different stuffed vegetables and food to take out for a quick little deli snack. 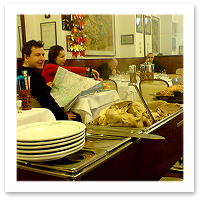 Fodor’s: Do you have a favorite place to have lunch?

MB: Yes, of course I do. My favorite place to have lunch is called Ristorante Diana (photo, right; Via Indipendenza, 24. 051/231302). It is everything that is classic and perfect about Bologna. They have a lasagna there that will bring you to tears. They don’t serve it hot; they serve it at room temperature. It’s cooked and taken out of the oven about a half hour before service and they just carve it up right there.

In the winter, they have a bolitto misto cart served by someone who looks like they’ve polished off the leftovers for the last twenty years. The cart is filled with all of these beautiful things like calf’s head, tongue, zampone (stuffed foot), cotechino (pork sausage), and turkey or guinea hen. They’re all sitting submerged in this little cart that comes over looking kind of like a dirty hot dog cart. They pull on this little handle and up comes this screened platter with all of the meats that have been sitting in the broth, and they carve you a nice little plate with all the different things. It’s remarkable.

Fodor’s: Where do you like to go for apéritifs?

MB: Bar Mocambo (Via d’Azeglio 1/7. 051/229516). It’s very casual and half of it is outside. Most people sit outside under these umbrellas. The bar is inside, but why would you sit in there when you can sit outside and look at all the crazy, fun people?

The Italians have an obsession with these light fruit-based apéritifs. They’re not strong, which is what I like about them because I like to sip ’em. I mean, not really sip, I kind of slug ’em. But they’re nice because instead being made out of hard liquor, they’re generally made out of Prosecco or white wine with maybe a little vermouth and then some crazy fruit purée.

Fodor’s: Where would you go if you wanted to splurge on a fancy meal?

MB: Ristorante Al Cambio (Via Stalingrado 150; 051/328118). That’s kind of a modern take on Bolognese cuisine. It has its heart and soul in Bologna but it’s a little more imaginative than most of the traditional restaurants. The look is kind of modern and the food is absolutely delicious, and they have a great wine list. The last time I was there I had a fried rabbit as my main course and a terrine of guinea hen with these mushrooms called ovoli as an appetizer. That was absolutely killer.

Fodor’s: Where is the best place to go for gelato?

MB: There’s a place called Sorbetteria Castiglione (Via Castiglione, 44; 051/233257). It’s spectacular. For me, it’s all about melons. The explosion of the flavor of the raw product is what I’m looking for. So, when they have watermelon or strawberry, it’s spectacular. 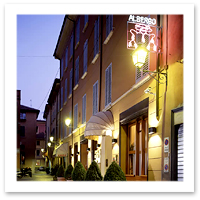 Fodor’s: What hotels do you prefer when visiting Bologna?

When I’m looking for the Jack Nicholson “redrum” moment, I stay at the Grand Hotel Baglioni. It has these really tall, thin doors all the way down a long hallway with red carpet and all you can see is that little kid saying “redrum”. It’s got that look. It could have been art-directed by Kubrick.

Fodor’s: What are some of the top sights people should see in the city?

MB: There’s the Morandi Museum, which is spectacular. It’s probably the largest collection of Morandi stuff in the world. Also, there’s a large long portico that goes up to the Sanctuary of the Madonna of San Luca at the top of the hill. The trick is to walk underneath the portico all the way up to the church. It’s beautiful.

[Bologna] is just so remarkably walkable and so delightful, and if you want to shop for fashion, Bologna and Milan are the two best towns in the whole country. Basically when I’m in Bologna, I’m just cruising around and every hour I stop for a coffee, or a little drink.

Fodor’s: Do you like to take day trips from Bologna?

MB: I like to go to Modena to two of my favorite restaurants in the whole country. I would go to lunch at Hosteria Giusti (Vicolo Squallore 46. 059/222-533) and then I’d go to dinner at La Francescana (Via Stella 22. 059/210118). Hosteria Giusti is from the 1570s. You walk into what looks like a little old deli and toward the back there’s a little curtained glass door and there’s a six table restaurant that is mind-blowing. La Francescana is the two-star Michelin restaurant and it’s the wild take on the potential for Emiliana gastronomy run by a guy called Massimo Bottura. It is spectacular.

I think the beauty of Bologna is that you’re 20 minutes from Modena and 30 minutes from Parma. So if you use it as a base, you can take little train rides to see other parts of magnificent Emilia-Romagna and you don’t have to pack your bags.

Fodor’s: Is there anything that people should know about Bologna before visiting? 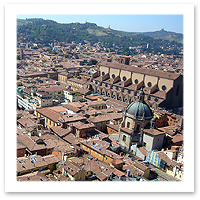 MB: One of the things you have to tell people is that a lot of times, some of the best restaurants and even more casual restaurants don’t have a printed menu. Americans walk into that kind of environment and think they’re going to get ripped off. Generally, in a town like Bologna, you don’t have to be afraid of that.

After you’ve been in Florence, and you’ve walked around this magnificent Renaissance jewel box and all you really hear is Japanese, German, and English, you go to Bologna, which is just an hour away by train and all of a sudden you’re in the Medieval age and there’s almost no Americans. It’s like you’ve been dropped into real Italy. It’s a relief for someone who spends so much time in Rome or Venice, and they’ve really just discovered so much of what they’ve left at home walking around next to them. That’s the beauty of Bologna. It’s not like that.