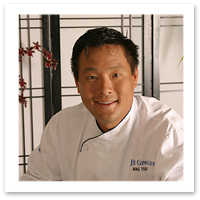 At age 43, Ming Tsai has made a name for himself as the premier chef of East-West cuisine. As the owner and chef of popular Blue Ginger restaurant, host/executive producer of the cooking show Simply Ming, and author of three cookbooks, Ming Tsai showcases the fusion of Eastern and Western flavors, dishes, and culinary techniques.

Today, Ming Tsai resides near Wellesley, Massachusetts, where he runs his acclaimed restaurant. Fodor’s recently talked with the chef about the best things to see, do, and eat in Boston. He reveals where to find the most delicious bowl of noodles, the city’s finest clothing store, and what to eat on the day of a Red Sox game.

Fodor’s: Where are some of your favorite places to eat?

Ming Tsai: In Porter Square there’s a place called Sapporo Ramen (1815 Massachusetts Ave.; 617/876-4805). They make the best miso udon noodles. It’s just unimaginable that you can finish this bowl of noodles, and I finish it every time. It’s like $8.50 or 9 bucks and it’s so good. The only other claim to fame at Porter Square is Japonaise Bakery (1815 Massachusetts Ave.; 617/547-5531). They make these great little sandwiches and this adzuki bean purée with a whipped-cream doughnut. It is off the charts. I don’t care how many calories it is, it’s delicious. I will run six miles to have one of those. 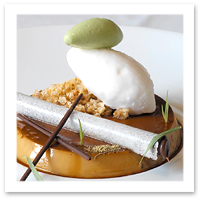 Fodor’s: Are there any other restaurants in Boston that you like?

MT: Yeah, Uni and Clio (photo, right). Ken Oringer and I worked as co-sous chefs at Silks at the Mandarin Oriental Hotel in San Francisco. We became great friends and have been ever since. He was one of the reasons I came to Boston. He opened up Clio a year before I opened up Blue Ginger. When Clio opened, it really took Boston by storm. So Clio was first, and it’s really one of the top places in Boston. Clio is fine dining, with white tablecloths and the whole nine yards. If my parents were in town and it was a holiday, I’d go to Clio. He has this little bar area downstairs that is under-utilized, and he’s like, “Look, I just want to do a little sushi bar.” And that’s Uni.

But [Uni] is very unconventional. There’s no sushi rice, so it’s a sashimi bar. Almost 90 percent of the menu is raw. There are a couple of hot things that come from the Clio kitchen, but most is raw. He gets pristine fish from Japan, and obviously uni, sea urchin, is one of his signature products. It’s just fantastic, pristine-quality fish and so simple in execution. It’s certainly much more casual and fun than Clio. There’s a great drink called “Enter the Dragon” that has chili flakes in it. He has some really tasty cocktails. He actually has a “Ming Tai,” which he created for my 40th birthday party. He now sells the “Ming Tai,” and I tell him “Where’s my 10 percent?”

Fodor’s: Tell us about Blue Ginger. What can people expect when dining there?

Fodor’s: Do you have a signature dish?

MT: If I had to pick one it’s the Sake-Miso Marinated Alaskan Butterfish. That dish, which I created pre-Blue Ginger, has been on the menu since day one, and it’s the most popular dish every night. Every chef has a dish that puts them on the map. This is the dish that put me on the map. 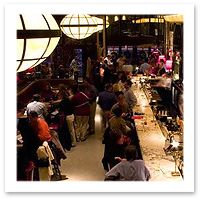 Fodor’s: Are there any bars that you really like?

MT: In the Commonwealth Hotel there is a fantastic bar called Eastern Standard (photo, right). It’s a very old French bistro-style bar — good burgers, good fries. We tend to go there for beers before a Fenway game.

Fodor’s: Are there any other good places to go for a bite on the day of the game?

MT: Jasper White’s Summer Shack is great for Rhode Island calamari, roasted lobster, fried clams. [It’s] the best raw bar. He always has the best oysters and clams. And as a fun thing, if it happens to rain and you don’t go to the game, you can go downstairs to King’s Bowling Alley, where there is fluorescent or neon bowling. That’s always a good place to burn an afternoon during crappy weather.

Fodor’s: Where is the best place to shop in Boston?

MT: Louis Boston. It’s really top of the line clothing. Brioni is one of my favorite brands, and they carry a lot of Brioni and mostly European-style clothes. They just have pristine service. It’s one of those stores where you walk in and [they ask], “Do you want an espresso or a Perrier?” They take care of you. I mean, you get what you pay.

I love Target, too. They don’t give me espressos, but I can buy four towels for ten bucks. It’s a great example of how service, just like in a restaurant, is just as important as the product you’re selling. People want to be treated well. You walk into Louis, and they know you. They take care of you. Are their clothes expensive? Absolutely. Is it worth every penny? Absolutely. You get what you pay.

Also, the Mario Russo Salon is there. Mario does my hair and he’s fantastic. His shop is on the third floor on Louis.

Fodor’s: Are there any hotels that you would recommend to visiting family or friends?

MT: For high-end, there’s the Eliot Hotel. That’s on the corner of Commonwealth and Massachusetts Avenue. You can’t miss it. The location is fantastic. That’s where Clio and Uni are located. It’s a very well-run hotel and one of the nicest in Boston. And I do like The Charles Hotel in Cambridge.

Fodor’s: Are there any other must-see sights in Boston?

MT: We love the Museum of Science. They have an IMAX there too. There’s always something to do there. The Aquarium is world-class as well. We’re lucky. We’ve got a lot. And don’t forget, if you come to Boston, you have to go to one of the four sporting venues: go see the Yankees lose to the Red Sox at Fenway, go see the Celtics play, see the Bruins play, and you’ve got to go out and see the Patriots plays. We’re a city blessed with four sports.