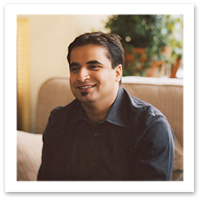 At age 35, New Delhi-born chef Suvir Saran has made a name for himself as one of the premier chefs of Indian cuisine, bringing the flavors of his hometown to the forefront of the American culinary world. Owner of the top-rated New York City restaurant Dévi, praised for its authentic, regional Indian cuisine, Saran is also a working teacher and writer. Author of cookbooks Indian Home Cooking and American Masala, Saran continues to masterfully showcase the food and flavors of his childhood.

Fodor’s recently chatted with Saran about some of his favorite dining, lodging, and late-night haunts in Delhi.

Fodor’s: What are some of your favorite restaurants in Delhi?

Suvir Saran: There’s this place called Karim, which would be my number one recommendation. It’s in Old Delhi in the walled city. It’s the best rendering of the Muslim dishes of Northern India. The lamb chops and curries are phenomenal, and the biryani is amazing. Even the simple lentils of Northern India are prepared beautifully. And they have a rice cream called firni that is superb as a dessert. It’s on a street adjacent to the largest mosque in India called Jama Masjid. People don’t expect to find amazing food in this area, because it’s very modest — the whole look of the area.

There’s a place called Bengali Sweet House (115 Bangla Sahib Marg), where you can get amazing chickpeas, fried Indian bread, and all kinds of Indian desserts. They have several locations across Delhi — the concierges of the hotels can tell you where they’re located. It’s a whole menu full of street food dishes. It’s a cleaner, safer version of street food. And for the best Chinese food in India, I would go to House of Ming. The sweet and sour vegetables are amazing.

Fodor’s: Are there any late-night eating spots that you like?

SS: Karim is excellent even at 1 a.m., 2 a.m., or 3 a.m. And there’s this excellent coffee shop at the Taj Hotel in Delhi called Machan, and people hang out there till the wee hours. There’s street sides in Delhi — there’s one in Dhaula Kuan, where a man makes flatbread with eggs called anda paratha — he flips eggs over flatbread, and at 3 a.m. or 4 a.m., for a few pennies, you can buy this amazing flatbread.

Fodor’s: What kinds of street food do you suggest?

Fodor’s: What Delhi hotels do you recommend?

SS: In Delhi, my favorite is the Imperial Hotel. But if you’re a business traveler and want good business comfort, something clean, chic and easy on the eyes [there is the ] The Park Hotel. They’re across the country, in Bangalore, Chennai, Calcutta, in the cities where business people go. They have just amazing qualities. You don’t feel like you’re in India. You can be in one of the most modern cities — you can be in New York, London, Paris, but you’re in the thick of India with all these luxuries.

Fodor’s: What are your favorite stores in Delhi?

SS: There’s an amazing textiles store called Krishna (26 Hauz Khas Village). They sell all kinds of Indian textiles — modern and the most ancient of textiles, and you can feel comfortable knowing they are real because the Indian “who’s who” shops there. They’re not selling crap and calling it antique. You can find 8th-, 9th-, and 10th-century jewels and modern jewelry. The names of the owners are Kaka and Nalin, and they are truly two of the most generous people New Delhi has. If you ask them for help, they’ll never send you the wrong way. You can write “Don’t hesitate to ask them for advice.” They’ll open up New Delhi for you in ways you’d least expect. Gael Greene now sends anybody and everybody to them because they’ll make sure you go to the right places. Their shop is in the heart of Delhi.

Fodor’s: What are some of the best sights to see in Delhi?

SS: If you’re in Delhi you must, must, must go to the Humayun’s Tomb. It’s Islamic architecture at its best. Jama Masjid — it’s the grand Mosque in Old Delhi. The Bahai Temple is a lotus-shaped white marble temple for the Bahai community, and it’s beautiful. The Tughlakabad Fort is an hour-or-so away from Delhi and it’s beautiful — an old fortress totally worth visiting.

Fodor’s: Any tips for people traveling to India for the first time?

SS: I think the best time to go is November through March. The other tip is to eat street food. Don’t drink any water that’s offered, and keep away from salads or cold foods. But if it’s cooked, eat it. Ask the concierges or waitstaff in the hotels and restaurants about where they would eat simple everyday food that they love. As for clothing, you don’t have to worry about being different. Modesty is valued everywhere in Asia, so while you don’t have to worry about covering your body, it’s advisable to be modest.