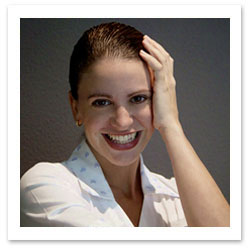 Michelle Bernstein is a culinary dynamo with a uniquely polyglot background. Raised in a Jewish-Latino household in Miami, Bernstein bridged cultures — and careers. She may be the only top toque who has also been a professional ballerina. But after a few years in the competitive New York dance world, the multitalented Bernstein traded in her ballet slippers for a set of kitchen knives.

She attended culinary school and worked under star chefs like Eric Ripert of Le Bernardin in New York before returning to her hometown to take the top spot at Azul in the Mandarin Oriental Hotel in Miami, where she garnered significant critical acclaim. Bernstein and her husband now run a modern bistro in Miami’s Upper East Side, called Michy’s [6927 Biscayne Blvd.; 305/759-2001]. She also was the co-host of The Food Network’s Melting Pot for two years, a show that presented the traditions, stories and recipes of her Latin background. Additionally, Bernstein has been a competitor on the Food Network’s Iron Chef America series, beating out Bobby Flay.

At the Food + Wine Classic in Aspen recently, Fodor’s caught up with the chef to get the inside scoop on where to shop, stay, and play in Miami.

Fodor’s: Tell me about your restaurant Michy’s.

Michelle Bernstein: Michy’s is a fun, ticky-tacky little restaurant that I opened a year and a half ago with my husband, David Martinez, and a partner. We opened it thinking it was going to be our restaurant “for now” until we opened our big, fabulous restaurant. But it became such a success overnight that we haven’t really looked up since.

Fodor’s: So the dining experience is pretty casual?

MB: The room is very casual. All the chairs are thrift, and they’re all painted and covered in an oil cloth we found in Mexico. The floor is painted dark blue, going with the dark blue ceilings. The walls have been painted all kinds of crazy colors in a style that was very apparent in the late 60s. We have great long chandeliers with shells all over them. It’s supposed to be fun — just come in however you are and have a good meal.

Fodor’s: Where is Michy’s located?

MB: It’s in a very hot little neighborhood that we call the new Upper East Side. But it’s really just Miami proper, north of downtown, north of the Design District.

Fodor’s: So it makes sense to stop in if you’re going gallery hopping in the Design District?

MB: For dinner or drinks, definitely. You can go shopping near us or in the Design District. You can see a show — an opera, a ballet — at the new Miami Performing Arts Center, which is only 12-15 minutes away from our restaurant, then come straight over for dinner. It’s a really centralized location. So we’re kind of in the middle of everything.

Fodor’s: What shops near Michy’s would you recommend?

There are awesome little salons that have just opened, like Rapunzel, which looks like a Barbie doll’s house. And from what I’ve heard, a lot of famous people are coming to get extensions. That’s only a block away from our restaurant. It’s just great because you see a lot of little antique shops and independent new stores as well.

Fodor’s: If someone is traveling to Miami for the first time, where should they go?

MB: One day has to be in South Beach, or maybe even two evenings. But often that’s the only place people go, which kills me. There’s so much great stuff in Miami. Downtown is beautiful. The Performing Arts Center was just built. And the Miami River flows through a lot of downtown and you see the greatest little restaurants on the river. Very Miami fare. Very Latin flavors. My favorite is Garcia’s [398 NW North River Dr.; 305/375-0765].

I know the boys from Garcia’s really well. I kind of grew up with them, and the food is just delicious. The Garcias are the cousins to the guys that own a restaurant called La Camaronera [1952 W. Flagler St.; 305/642-3322], which means shrimpery. It’s a place downtown that I’ve been going to since I was tall enough to reach the counter — because it’s only counter dining. Best fried shrimp I’ve ever had. That’s downtown, close to Garcia’s. So you have a choice. You can either rough it and go to Camaronera, and basically get your choice of just three of four dishes, or go to Garcia’s and have the whole thing.

Fodor’s: What about going out in South Beach? Are there places you’d recommend?

MB: Automatic Slims is very cool, but the best [place] actually just opened recently, called Love Hate Lounge. The owners are the guys from Miami Ink, that show about tattoos. You don’t understand how beautiful this place is. It’s funky. It’s local. It’s old school — really old hip-hop music. You don’t have to get dressed up and it’s really casual, and it doesn’t cost much. That’s my favorite new place.

Fodor’s: Are there any salons or spas you’d recommend?

MB: Oh, for sure. One of my favorites is called Ego Trip [1623 Michigan Ave.; 305/672-0871]. They don’t do manicures — just hair. They do it really well. The salon I go to is called Sofi Salon and Spa, in South Beach, south of Fifth St. They give some of the best pedicures I’ve ever had, and they are amazing with hair. What’s great is that it’s totally off the beaten path, so you’re not in the middle of craziness. It’s always kind of quiet and serene and they do a really good job.

Another great place is Brownes & Co. spa and salon, on Lincoln Avenue. It’s an amazing store where you can find pretty much everything you’ve ever looked for in beauty products. Upstairs there’s a full-service salon. They’re open every day of the week, from early in the morning until really late. So if you really need a manicure and you haven’t made an appointment at your local place, you just walk right in.

Fodor’s: Are there any hotels that you’d recommend?

MB: The newest hotel is The Regent, where Table 8 restaurant is. The hotel is beautiful and still a little bit on the quiet side — it hasn’t gotten too crazy yet. It’s a gorgeous space and you can always come downstairs and eat at Table 8, which is pretty fabulous. I’ve always loved the Hotel Victor, which opened up a few years ago. It’s still small and they really take care of you.

One of my favorites that actually just opened is called The Standard. André Balazs has done a great job making you feel so comfortable when you get there. You know, sometimes I feel like I’m not really dressed well-enough. I’m not thin enough. My legs aren’t long enough. But the great thing about The Standard is there’s a little bit of everything. A little bit of everyone. Get a drink at the pool — it’s very comforting, yet beautiful.