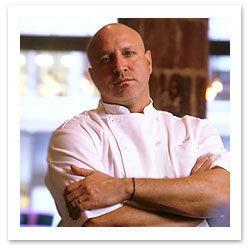 You never know where you’ll find Tom Colicchio, the time-zone traversing chef whose 17 restaurants operate in six cities, and who appears as head judge on the Bravo reality cooking competition, Top Chef.

When he’s not filming episodes or checking in on operations at Craft in New York, Craftsteak in Las Vegas, ‘wichcraft in San Francisco, or branch units of his concepts in Los Angeles, Dallas, and Atlanta, Colicchio likes to escape to Charleston and Kiawah Island in South Carolina for some R&R.

At the Food + Wine Classic in Aspen recently, Fodor’s caught up with the über-chef to get the inside scoop on where to eat, stay, and play in Charleston and Kiawah.

Colicchio: Charleston is just one of those wonderful Southern towns. It’s also a great college town. You’ve got the College of Charleston right there, and the Citadel. The great thing about Charleston is that it’s so beautiful. They still have the old, old homes — these big old, federal-style homes. The antiquing is incredible.

The other cool thing to do are the haunted house tours — great for the kids. They’re at nighttime and there are apparently several haunted houses, and you go around while they talk about the lore of these houses.

F: Do your kids travel with you?

C: Yeah, my son’s been there with me, and we’ve gone to Fort Sumter. Also, you can go across the river and there’s a navy boat that you can visit and a submarine base. There’s also the Mud Dogs — it’s a minor-league baseball team. The beaches are great. For me, going to South Carolina, it’s not so much about the beaches, it’s about the marshes. It’s just wonderful to get a kayak and go through the marshes. You see everything from redfish to alligators to dolphins. It’s amazing — the amount of birds and wildlife.

F: Do you go fishing out there?

C: Yep. I fly-fish for redfish along the beach there. I do mostly salt-water fishing.

F: Is Charleston where you go to escape from work?

C: It’s a great place to vacation, but I do some work down at Kiawah Island too. It’s like a half an hour outside of Charleston. I stay down on Kiawah at the Sanctuary on Kiawah Island. There are two parts of Kiawah, the resort and the private club, and I’m affiliated with the club. The Sanctuary is a beautiful new hotel.

There’s also Planters Inn in Charleston, which is a beautiful property. I’d recommend it to friends.

F: What about food? Where do you go for Southern cooking?

C: What’s great about the South is that the idea of hospitality is second-nature. One of my favorites in Charleston is Hominy Grill. It is just the epitome of Southern casual dining. Breakfast, lunch, dinner — every single meal is just wonderful. Usually when I go to Charleston, I go right from the plane to Hominy Grill. I try to get there for breakfast — they do shrimp and grits and different egg dishes. Whatever they serve is usually seasonal, wonderful, delicious. Last time I was there I had shad roe and scrambled eggs for breakfast.

F: What do you recommend for barbecue?

C: Melvin’s Barbeque. It’s in Folly Beach, which is just a little outside of Charleston. Really great barbecue. You know, South Carolina is really more of a mustard-based barbecue, and I think it’s really great. They also make these onion rings that are almost like donuts — they’re dipped in donut batter and fried. They’re huge, just awesome.

F: Are there any regional specialties you’re particularly fond of?

C: There are so many little fish shacks around Charleston. There’s a little place called Bowen’s Island (1870 Bowen’s Island Road; 803/795-2757), an oyster grill where you sit at a picnic table, and the guy comes by with a shovel full of oysters that come off the grill and just puts [them] on the table on top of newspaper and they’re kind of steamed open from the grill — and that’s it. You dip them in butter and that’s all they serve.

The other thing that’s great is on the way to Kiawah. There’s a pretty good Mexican population, and they have these trucks on the side of the road in North Charleston that have just wonderful Mexican food. Sort of something you don’t expect at all, but it’s there.

C: I think if you’re on the East Coast and you’re looking for a quick weekend where you can actually do many different things, it’s a great place to go. There’s great food and plenty of things to do, whether you’re looking for an outdoor vacation or an antiquing vacation, or if you just want to stay in the city. It’s one of the best small cities in the country.