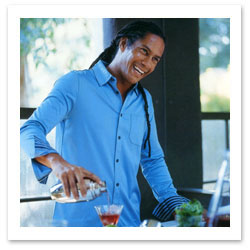 Govind Armstrong may be one of Los Angeles’ hottest chefs, but don’t expect to see him crowding the red carpet. While his restaurant, Table 8, exudes an air of glamour and sophistication, Armstrong is a laidback guy who prefers to spend his days off relaxing at the beach, hanging out at gastropubs and cruising around the valleys on his vintage BMW motorcycle.

The chef, now 37, began his career at age 13, peeling carrots in Wolfgang Puck’s kitchen at Spago in West Hollywood. From there, he went on to work with other L.A. luminaries, including Nancy Silverton at Campanile, Mary Sue Milliken and Susan Feniger at City Restaurant, and Joachim Splichal of Patina Group. In 2003, he opened Table 8 to great critical acclaim.

Building on the success of the L.A. restaurant, Armstrong opened a second Table 8 outpost in South Beach in 2006. The chef’s first book, Small Bites, Big Nights, was released by Clarkson Potter earlier this year.

Here, the Los Angeles native shares his favorite places to grab a beer, view classic cars, eat on the beach, and more.

Fodor’s: Tell me about your restaurant, Table 8.

Govind Armstrong: Table 8 restaurant is a seasonal- and ingredient-driven restaurant with a pretty small menu — about eight appetizers and eight entrées. My style of cooking is very straightforward, like California cuisine without any Asian influence or anything like that. I don’t have a lot of ingredients on one dish, so it’s very focused in that sense.

F: Do you have a big bar scene?

A: We have a really good bar scene. It’s a decent-sized lounge, comfortable to sit in, with great sofas and little ottomans to kick your feet back. And we have a great little daybed that gets utilized in many interesting ways.

It’s a fun menu on the bar side too — mostly small versions of big-flavored dishes, with some communal stuff like truffle-Gruyère fondue. Right now we’re doing a fun “knuckle sandwich” — it’s like a lobster roll made with lobster knuckles. One of the most popular items, and one of my favorites, is the fried olives.

We have a great cocktail menu. The Basil 8 is one of the most popular drinks. It’s white grapes muddled with a basil leaf, a bit of simple syrup and vodka, and a splash of Sprite. It’s really, really good. Super light. In season, we do a really good pomegranate martini, using fresh pomegranates and a little bit of pomegranate molasses.

F: Where is Table 8 located?

A: On Melrose Avenue, a funky little neighborhood near West Hollywood. The Melrose strip is one of those streets with a bunch of vintage T-shirt places and old record shops and a lot of walking traffic. It’s got a lot of cafés and shops, and there we are right in the middle, in a darkly-painted, unassuming building. There’s a piercing parlor up above us and a tattoo parlor as well.

There are so many new restaurants opening on Melrose now — it’s becoming a big destination for dining. The Foundry On Melrose just opened up not too long ago, and Mario Batali and Nancy Silverton’s latest place, Osteria Mozza, is going to open soon as well.

F: For someone going to L.A. for the first time, what other neighborhoods would you recommend exploring?

A: I love the beach, but I rarely get out there because I’m so busy. I used to live in Venice, in West L.A., for a long time, and I still love going back to Venice Beach. I love walking the boardwalk and going out on the piers. You can walk all the way from Venice to Santa Monica. It’s great people watching and it’s very, very entertaining.

There are a couple of good restaurants out there. In Venice, I like the Firehouse [213 Rose Ave.; 310/396-6810]. It’s really good for breakfast. The Rose Café is a gourmet store and café that serves really good food. Nothing too serious, but it’s always really tasty.

F: Are there any farmers’ markets that you like to visit?

A: Definitely. When I’m in town I always go to the Farmers’ Market in Santa Monica on Wednesdays. A lot of my favorite farmers go there. It’s pretty much got everything you’ll ever need. It’s a total chef’s hangout in the morning. There’s also a farmer’s market in the same place on Saturday, and that one is all organic. A lot of the same farmers will go but everything they sell has to be certified organic.

F: What about bars? Where do you like to go out?

A: Recently, I’ve gone to The Village Idiot, which is right down the street from me. It’s a great little gastropub that opened up about six months ago. They have a really good menu that serves late-night food up until 12:30 a.m. or maybe one in the morning. Good beer selection and just a really good ambience.

F: What other restaurants do you enjoy in L.A.?

A: On my street, there’s Providence, which is great. It’s Michael Cimarusti’s place. He does some amazing things with fish. It’s New American-style cuisine, using all sorts of fish. He does get a lot of European and Mediterranean fish, but handles everything properly.

I just went to Fraiche [9411 Culver Blvd.; 310/839-6800], an Italian-style restaurant in Culver City. Jason Travi is the chef. I only went in and sat and ate at the bar but everything was executed really, really well.

F: What museums would you recommend seeing?

A: I love LACMA. I’ve definitely seen some great shows there. That’s right next to the La Brea tar pits, which is pretty unique to L.A. I remember when I was in elementary school going on field trips down there. It’s pretty hilarious.

For galleries, I’d recommend Culver City. There are a lot of great small galleries there, dispersed throughout the Culver City neighborhood. It’s probably one of the most talked about neighborhoods right now. They’re really building it up.

F: Are there any other places you’re excited about in L.A.?

A: I really enjoy going to the Petersen Automotive Museum. They have different shows — classic cars and vintage cars. They’ll do muscle car shows or they’ll have a Hollywood show where it’s all about cars that have been in famous movies and all that.

F: So you’re really into cars?

A: Yeah, cars and motorcycles. I ride an old BMW bike. Don’t get me wrong — I don’t like sitting in traffic. But I love cruising up on Mulholland Drive and over to Topanga Canyon.

F: If someone’s interested in taking a scenic drive around L.A., where should they go?

A: I would do Topanga Canyon. I would take the Pacific Coast Highway down the coast — it’s a beautiful drive — and then cut up [to] Topanga and take that all the way back. It’s a nice long drive.

You’ll pass by Gladstone’s Malibu, which is an institution. It’s a restaurant on the coast that’s been there forever. Stop in for a shrimp cocktail or something cheesy like that. It’s upscale but dive-y at the same time — there’s sawdust and peanut shells on the floor.

In Topanga there’s The Rock Store, which is a fun, motorcycle hangout on the side of the road. It’s sort of a bar/restaurant/café where all the bikers pull up and hang out. There’s no discriminating — there’s everything from the Kawasakis to the Harleys to the Beamers. Everybody gets along.

All those canyons are great for motorcycling. Malibu Canyon is a fun ride as well. Taking Sunset all the way out through Hollywood is fun, too, because you go through Beverly Hills and the Pacific Palisades and then you hit the ocean. It’s a great ride.