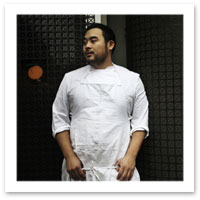 So where does this chef-owner of some of Manhattan’s most popular restaurants like to eat on his days off? That’s what we wanted to know. Here, Chang shares his top restaurant picks (and dishes) in the city right now.

Fodor’s: When you first started out as a chef, you spent some time in Tokyo, and you’ve noted that Japan changed the way you think about food. Relating that sentiment to New York City, how would you describe the dining scene here and would you call it a food culture?

David Chang: I don’t know. It’s not as great as it should be. I think it’s great that we have all this street food but it’s not like going to Southeast Asia and getting street food there. Now that would be awesome.

The one thing about New York cuisine is that we have a little bit of everything, but not one thing is tremendously great. I think that one thing missing is great Latin cuisine. That’s probably the No. 1 thing. Unfortunately, I think New York is still a steakhouse and hamburger town. It’s a little less conservative than other cities, but most places play it safe. We have a tremendous amount of great restaurants. For fine dining, we got it. I just think our city—there shouldn’t be any question that we should be the culinary capitol of the world.

Fodor’s: What are some of your favorite restaurants in the city?

I think the place that I eat at more regularly than most is wd~50 (50 Clinton St., between Rivington and Stanton Sts.; review) because it’s one of the few places where it’s fun to eat and the food is also delicious. Wylie [Dufresne] is doing great stuff. For Italian, I really like Lupa (170 Thompson St., between Bleecker and W. Houston Sts.; review) a lot. But my go-to restaurant is Oriental Garden (14 Elizabeth St. 212/619-0085).

Fodor’s: What do you usually get at Oriental Garden?

DC: There’s so much. That’s one restaurant where it definitely helps to know what to order. I love the Peking pork chops. Anything that is Cantonese is quite delicious there. I know that many people think that Chinese food here in New York sucks compared to L.A. and Hong Kong but I think Oriental Garden is quite good and very consistent.

The one thing that I order a lot at Oriental Garden is the Lobster Country Style over e-fu noodles [Asian wheat noodles]. It’s a whole lobster that’s been chopped up and cooked with some egg, and some minced pork, and some vegetables and it’s almost like this gravy and they pour it over e-fu noodles, which are essentially braised noodles that are spongy and delicious. It’s one of my favorite things to eat in New York City right now.

Fodor’s: Where do you go for the best cheap eats in the city?

Fodor’s: Do you have any favorite bars in the city?

Fodor’s: And after the bars, where do you go for your favorite late-night eats?

Fodor’s: Do you have a favorite pizza place in the city?

DC: Pizza here is not as good as it could be. I don’t eat that much pizza. Una Pizza Napoletana is gone now, so I don’t know. I’ve never been to Motorino (website). And all the slices, I think they are essentially all the same.

Fodor’s: Are there any new restaurants that you’re excited about?

DC: There are a lot of restaurants that I want to check out. I want to check out the new Aureole (One Bryant Park, 135 West 42nd St.; website), Chris Lee’s new restaurant with Charlie Palmer. I still haven’t been to Marea (240 Central Park S.; website), which I’ve heard is great. There are a lot of great things going on in New York. I’m not trying to say that there’s not, I just feel that New York can do better.

DC: The newest branch—it’s going to be French-Vietnamese-type cuisine by Tien Ho and that’s all we know right now. It’s certainly going to be larger [than the other restaurants]. The person running it is Tien. If he needs any help from me, I’ll be there to help out but I’m going to be focused on downtown [Momofuku restaurants] and this is really his show. It’s going to be work in progress and we’ll see. I think Tien is going to have some really exciting stuff.