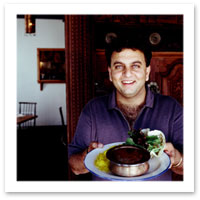 Talk to any Vancouver resident, and he or she will tell you that no visit to the western Canadian city is complete without dining at Vij’s. The upscale Indian eatery is the brainchild of Vikram Vij, an Indian born chef who grew up honing his passion for cooking at fine dining restaurants in Austria and Canada.

When he opened Vij’s in 1994, his emphasis on using spices and cooking techniques from all regions of India and fusing them with local and seasonal meats, seafood, and produce quickly garnered a loyal following among local and international foodies alike. It has since received numerous accolades from venerable outlets, such as the Food Network, and is regarded as one of the best Indian restaurants in the world. The no-reservations, dinner-only spot opens at 5:30, but a sizeable line usually forms outside the door by 4:30. In fact, the waits at Vij’s are legendary and can span up to two hours, but the kitchen is known for sending out trays of fried pakoras and samosas to the waiting crowd. Vikram has since opened Rangoli, a more casual restaurant next door to the fancier boite, that serves lunch, packaged meals, and spices.

The dynamic chef recently chatted with Fodor’s about his ambition for Indian food and his favorite way to enjoy Vancouver.

Fodor’s: Tell me about your restaurants in Vancouver and why you think they have a cult following.

VV: My goal is to showcase to the world that Indian food is not chicken tikka masala and butter chicken. To that end, we go out of our way to make sure everything we serve is superior quality. We make our own yogurt, cheese, and ghee, grind spices every day to use in our curries, and work with local farmers for produce and dairy whenever we can. I think that our no shortcut approach comes through in the taste of the food. Plus, I am always at the restaurants and make sure we provide really good service. Because of these two reasons, lots of people enjoy eating our food.

Fodor’s: What are your favorite places to eat out in Vancouver?

VV: I love going out to eat, and one of the best things about living here is that there is such a great mix of food. Probably my two favorite places are Chambar, a Belgian restaurant, and DB Bistro, Daniel Boulud’s bistro.

Fodor’s: Tell me about your ideal day off in Vancouver. What do you like to do?

VV: It’s usually a Sunday or a Monday. I walk to Stanley Park from my house and go for a jog along the seawall, which is a path that snakes along the ocean and perhaps one of the most scenic runs in the world. Then, I love to spend the rest of time with my two daughters. We go out to lunch to either Legendary Noodle House, which has the best Chinese food, or Quince, where the menu changes everyday depending on what is at the market. They have the most amazing salads and sandwiches. In the afternoon, we hit up a farmer’s market and shop for ingredients to make dinner. We come put our aprons on and cook.

Fodor’s: Vancouver is known for using local ingredients. What restaurants do you think do this best?

VV: John Bishop, who runs Bishop’s, a beautiful fine dining restaurant was the first guy who was a pioneer is taking advantage of the surrounding region. He was doing it before it was even a trend, and he still does it best. But most restaurants here go local, and why wouldn’t we? We have Fraser Valley that grows outstanding produce, the bounty of the surrounding ocean and the Okanagan Valley that harvests great wine.

Fodor’s: What about hidden Vancouver? What are some sights/ places that most visitors don’t know about?

VV: People do not know that we have such a great wine region that is two-and-a-half hours from the city. The Okanagan Valley is scenic and has many kinds of excellent wines from pinots to whites to sweet ice wines. It’s an undiscovered gem.