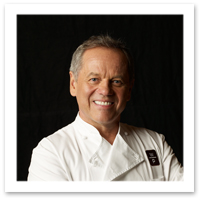 Wolfgang Puck may be one of the most recognizable chefs in the world today. With a host of restaurants throughout the country, this top toque, cookbook author, and occasional TV personality also has his own line of canned soups and frozen pizzas, making it almost impossible for anyone to miss out on his signature gourmet flavors.

Although Puck’s ever-expanding empire has taken him all over world, he recently sat down with Fodor’s to discuss the Italian island of Capri, a destination that has special personal significance to him, as it is the place where he married Gelila Assefa in 2007. Puck reveals what he loves most about this island getaway, and lets us in on his favorite places to eat and stay when visiting.

Fodor’s: Tell us about Capri. What do you like most about it?

WP: I love Italy and I think Capri is really a special place. We got married there. We were supposed to get married in Tuscany but it’s so hot in the summer, you know. I said we can’t get married here unless we are in a bathing suit on a beach. Then a friend of Gelila said we should go to Capri. We looked it up and I had never been and she had never been, so we decided on Capri. It’s really a magical place. Maybe I wouldn’t live there, but to go for a week, it’s the perfect place. And when you’re up in the town, there are no cars; no nothing. Everyone dresses nicely. You rarely see guys walking around in t-shirts and jeans. They all have linen pants and linen shirts and the women dress up. There are very few places that I’ve been that are so different from anywhere else.

Fodor’s: Tell us about when you visit. Are there any particular hotels that you like to stay in while you’re there?

WP: Well we always stay at the Quisisana. You can stay there with the kids. At some of the other hotels you can’t have little kids. This one is right in the center square so you sit outside at night and you have your aperitif before going out. It’s really nice. It’s not like a hotel in Miami Beach or somewhere like that. It’s an old building and now it’s one of the luxury hotels in Capri. There’s a beautiful pool and they have a nice setting for lunch during the summertime.

Fodor’s: Do you have a favorite place to get pizza while you’re in Capri?

WP: There’s one pizza place called Ristorante Pizzeria Aurora. They make a thin crust pizza with just a little tomato and fresh buffalo mozzarella, which they get from around Naples. So it’s really very simple but the products are really good.

Fodor’s: What do you think is the best restaurant on Capri?

WP: I go to Ristorante Pizzeria Aurora [above] for pizza because they are the best for that. Da Paolino (Via Palazzo a Mare, 11 Capri. 081/8376102) is a restaurant that is located under lemon trees. They have this great antipasto buffet, so you have that and a few pastas. And then if you want great fish you take the boat over to Nerano, which is the first little town on the Amalfi Coast. Tonino Mellino owns this restaurant called Quattro Passi. It’s so great because he is a fantastic cook and he has great fish and great pasta, so it’s really nice.

Fodor’s: And what about Anacapri? Have you been there?

WP: I went up there to Capri Palace. I had dinner there. It’s too fancy for me. The dinner at the Quisisana is also too fancy for me. When you’re at a place like that you feel like you’re at a stuffy hotel. Even at the Palace. It has very good food but it’s very formal service and you don’t feel like you’re on vacation in Italy. When I want Italian food, I want real Italian food. I don’t want it so fancy, especially when you’re in Southern Italy. That’s why I like Quattro Passi [above]. It’s so nice because it’s not fancy at all. Tonino Mellino is a wonderful chef and makes good food. And you sit outside on a terrace and overlook the whole sea.

Fodor’s: What about sights? Are there any sights that you would recommend to people or something that you found that is really special?

WP: I actually did not sightsee as much as I wanted, because with the kids [Oliver, age 4; Alexander, age 3] I was always at the pool. Once in awhile we rented a boat. I didn’t get to go in the blue grotto yet. I went into the green grotto. The light is all emerald green inside.

Fodor’s: Have you taken any day trips from Capri?

WP: For a day trip, it’s really easy. I like Naples. It’s an interesting old city. You can also go to Ravello, to Positano to all these places, which is really nice. And [Capri] is a really great place to go anywhere, especially because they have the ferry. So you don’t have to charter a boat, but rather go on the ferry to Ravello and to Positano. It makes it easy.

Fodor’s: Is there anything else that you would suggest as a tip or something that would make a trip extra special to Capri?

WP: I think it’s such a special island. I think someone should rent a boat to be able to go around, you know. You have to see the tourist things like the grotto and everything. It’s really mesmerizing.

An interesting thing about Capri—there’s nothing down in the harbor. You go to Saint-Tropez and you will hang out down in the harbor, but not in Capri. You come up in a taxi from the harbor and then you have to walk to the hotel no matter what.