News Larry Bleiberg You Can Finally Look Inside This Stunning D.C. Landmark. But Only for Another 25 Days
Home  >  News   >   Top Chef Travels: Donald Link 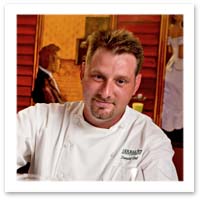 Louisiana native Donald Link grew up in the heart of Cajun Country, where he developed a love for the same down-home Southern food that has made him famous. Having begun his restaurant career as a teenager washing dishes, this James Beard award-winner now has three New Orleans’ restaurants to his name: Herbsaint, Cochon, and Cochon Butcher. Not content to stop there, the multi-tasking chef has just added “author” to his resume with the recently-published cookbook Real Cajun: Rustic Home Cooking from Donald Link’s Louisiana.

Here, Link talks with Fodor’s about some of his favorite local spots in the Big Easy, the city where he spends his days and nights. He reveals where to go for the tastiest crawfish, the sloppiest po’ boy sandwich, and of course, where to drink (other than on Bourbon Street).

Fodor’s: In terms of food, what does New Orleans do better than anywhere else?

DL: Oysters on the half shell are a big deal here and po’ boys are real big. For po’ boys, there’s a place in Bucktown called R&O Restaurant (216 Hammond Hwy. 504/831-1248). I think they do the best po’ boy in town. It’s called an “R&O special.” It’s got hot ham and roast beef and it’s huge; it has sauce all over it. It pretty much epitomizes what a big, decadent roast beef po’boy is like. The place has red and white checkered tablecloths, carpet floors, big rolls of paper towels on the tables, condiments to make your cocktail sauce with. It’s just a big local spot. You don’t really see tourists in there.

For oysters you can’t really beat Acme Oyster House. They usually have a line during lunch and dinner, so if you can make it at three in the afternoon, it’s a nice little afternoon getaway.

Fodor’s: What other restaurants would you recommend in New Orleans?

DL: I love Lilette restaurant. It’s on Magazine Street, and Magazine Street is full of really unique dress shops and specialty stores and it’s a huge shopping area. If you’re shopping on Magazine Street, I think Lilette is a great place to stop for lunch. They have a chicken soup with a whole poached egg in it that’s just delicious. It has a very Uptown feel to it—very French bistro, but very New Orleans. My nieces are 17 and 18 and they were here during Christmas and I took them up and down Magazine Street shopping and we had lunch there.

Fodor’s: Is there any place in particular that you like to go for crawfish?

DL: There is one place in Cajun Country that’s worth a flight in from anywhere in the world. It’s called Hawk’s. Last year we chartered a bus and took the staff out there. They’re only open from February through May; only when the crawfish are really big. They put them in water tanks for 24 hours to get them real clean, and they’re phenomenal. They’re just hands-down. It’s about 2 hours away from New Orleans and it’s worth it.

Fodor’s: How about bars? Where are some of the best places to get a drink in New Orleans?

DL: It all depends on what you’re looking for. Me, being a local, I would probably go to Cochon Butcher, or Delachaise or the Columns. But if I had some friends from out of town who wanted to see music and get a New Orleans kind-of-vibe, I’d go to Magazine Street and go to Le Bon Temps Roule. There’s a front bar with a couple pool tables, a back room where they have the bands play and a little outdoor courtyard. It’s very loud, very crowded, but they have great music there.

And then there’s the Maple Leaf. That’s farther Uptown towards the river bend and they run a great bar. It’s very, very New Orleans, and very, very local.

For an afternoon drink on a nice day I think the Columns is one of the best places to get a drink in New Orleans. It’s called the Columns because its one of these old classic homes with the giant columns out front and the columns encase a gigantic porch and they have a courtyard around the side of the porch for some extra outdoor seating. It’s right under the oak trees on St. Charles Avenue. It’s a great, great afternoon spot.

Fodor’s: Do have any favorite places to go to hear live music?

DL: If you want the New Orleans brass band-kind of experience that would be Maple Leaf and Le Bon Temps Roule, depending on who’s playing that night. Then there’s Tipitina’s. Tipitina’s is a classic spot. They have a lot of very, very distinctive New Orleans bands and on Sundays they do a fais do-do, which is Cajun dancing.

Fodor’s: Are there any hotels that you usually recommend to visiting family or friends?

DL: Well they usually all stay with me. But, I think The Windsor Court and The Ritz-Carlton are excellent hotels. When I was a kid, my mom always took us to the Windsor Court. You get a real sense of New Orleans when you stay there.

Fodor’s: Are there any sights or attractions that you think people shouldn’t leave New Orleans without seeing?

DL: If you’re coming with kids, I think the Audubon Zoo is awesome. We have a year membership so we take the kids all the time and it’s a really good-looking zoo. My daughter is 9 and my son is 2 and ever since they were little I’ve been taking them to the Louisiana section of the zoo and we get crawfish pies and red beans and rice.

And then there’s the river boat. I know it seems corny but we took a ride on the river boat a few months ago. I think it’s kind of cool. And then of course there’s just walking around the French Quarter.

Fodor’s: You own three restaurants in New Orleans: Herbsaint Restaurant, Cochon, and the recently-opened Cochon Butcher. What can people expect at each place?

DL: Cochon Butcher is great for people coming out of town who want to bring stuff back with them. We’re selling raw cuts of meat but we’re also doing some classic sandwiches. We make everything. We make our own salami, mortadella, andouille, boudin, etc. So as far as anyone who wants to bring meat back with them, this is the place to do it.

Herbsaint is more Louisiana, French bistro-style. Well, French bistro with Louisiana influence. You know, we have duck confit with dirty rice. It’s kind of a combination of the French and the Louisiana. And Cochon is very Cajun and Southern. We have rabbit and dumplings, smothered greens, catfish court-bouillon, boudin, etc. It has a different feel than Herbsaint.

Fodor’s: And finally, do you recommend taking any day trips outside of New Orleans?

DL: I would definitely recommend day trips. The first thing that I would do when visiting New Orleans is check the festivals calendar for the year and find a festival somewhere near Lafayette in Cajun Country. It’s about a 2 hour drive from New Orleans and it’s a straight shot. They have so much food and everybody in Cajun Country dances. That’s where I’m from.