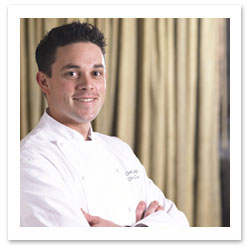 Although he is only 27, the award-winning chef Gavin Kaysen is on a trajectory toward greatness. Earlier this year, the top toque of El Bizcocho restaurant at Rancho Bernardo Inn, in San Diego, was named one of Food & Wine magazine’s Best New Chefs for 2007, making him one of the youngest chefs ever to be honored with the award. He was also the first-ever chef from San Diego to receive the distinction.

Fodor’s caught up with the rising star at the Food & Wine Classic in Aspen to get the inside scoop on where to eat and play in San Diego.

Fodor’s: What are your favorite restaurants in San Diego?

Gavin Kaysen: For high-end restaurants in San Diego I’d recommend Jack’s La Jolla. A guy named Tony DiSalvo is the chef, and he worked at Jean-Georges in New York for several years before coming to San Diego. Tony and his partners opened up this restaurant that is different concepts on each tier. It’s a sushi bar, a steakhouse, fine dining restaurant, and casual grill. On Thursday, Friday and Saturday, it’s like a club.

When my wife Linda and I go, we always go for the steakhouse because it’s got the most simple food. You know, it’s just really good meat and really good sides. He’s got like nine or ten different types of sauces. And it’s just fun. You can go in shorts and a T-shirt and you’re fine.

Laurel is good. It’s downtown. They’re kind of making their comeback. It’s an interesting vibe. The chef, Brian O’Connor, makes Mediterranean comfort food in this very eclectic décor. You walk in and the décor is like, whoa, but then the food is actually kind of nice. You don’t feel so snotty when you’re eating it, you know what I mean?

Fodor’s: You said it’s making a comeback, so it’s been around for awhile?

GK: Yeah, it’s been around for about 10 years. Brian came on like a year and a half ago. That’s the thing in San Diego. There are so many young chefs coming in from New York City, San Francisco, Seattle, all over the place. All these young chefs are coming to San Diego, I think, because they see it as a market where they can really explore their cuisine. I mean, when we moved to San Diego we moved there because we kind of threw a dart at a map.

Fodor’s: Are there any new restaurants you’d recommend?

GK: Blanca is very good, and it opened up a year and a half ago. The chef there is Wade Hageman. It’s in Solana Beach. It’s a weird building they’re in, but it’s a really cool restaurant. Their prices are high but the food is good. They get away with it because they’re right on Solana Beach.

It’s pretty relaxed for a pricey restaurant. You know, most of the time when I go there, I eat at the bar. And they have what they call this “living room” that literally is like a living room in a house. You can just sit down and have drinks and hors d’oeuvres. It’s super loungey.

Fodors: Can you recommend a place for dessert?

GK: Extraordinary Desserts is awesome. There’s one in Hillcrest and one in Little Italy. Karen Krasne, the chef, has got great stuff. She does beautiful cakes. She’s got a really nice vibe. The one in Hillcrest is like a very petite coffee shop. It’s tiny and completely surrounded by trees. You can’t see anything. You’re walking through trunks of trees to get to your chair. It’s just very cozy. She’s got great desserts and really good teas. We like to go there.

Fodor’s: What if you just want a fish taco?

GK: Wahoo’s Fish Taco shop is awesome. That’s in La Jolla. You can get it grilled, baked, or fried. We usually do the grilled Mahi-Mahi and they have this insane mango salsa and it’s awesome. You’re just sitting there and there are two TVs that play nothing but guys surfing. There are surf stickers all over the windows — people just come in and put a surf sticker on the window and then eat their fish taco and bail. It’s kind of in the middle of nowhere, next to a fish market in La Jolla. It’s really small, but it’s awesome. It’s about a five-minute walk to the beach from there.

Fodor’s: Let’s say you’re coming into the city and you only have a weekend. What are the can’t-miss things you have to do?

GK: I’d say on Sundays you’d go to Café Chloe. That’s nice for Sunday brunch, for coffee and all that. It’s kind of like a neighborhood-style restaurant. You can go in and get really simple food in the morning, like a frittata and a cup of coffee. It has a Parisian feel, and the doors are open, and you’re downtown near Petco Park. It’s just a cool place to go.

We also usually end up going to the Farmers’ Market in Solana Beach [124 Loma Santa Fe Drive, Solana Beach]. It starts late, at 2 p.m. The flowers are fantastic. It’s cool to go every week because you see the change in the produce and the change in the seasons. We buy a lot of the stuff we’ll eat for dinner that night.

The farmers’ market is right near the Design District, so you can go shopping afterwards. There’s this really cool warehouse store called SoLo, and they’ve got everything. It’s an awesome place to get travel books, cookbooks. They’ve got great candles and a lot of really cool stuff.

Fodor’s: Where else would you go?

GK: I would go to the spa at the Rancho Bernardo Inn. They just did a beautiful renovation. There’s a spa menu that’s like a tasting menu, so you can get a facial, then a massage, and then a pedicure.

Fodor’s: Tell me about El Bizcocho?

GK: It’s very high-end, but home-style. It’s just very comfortable, old California-style. We do a lot of tasting menus, especially now more than ever. We have an à la carte side of the menu and then we have four tasting menus. I would say maybe 60% of the customers order tasting menus. One of the four-course menus is focused on vegetables, and the other is seafood-driven. We have a five-course Grand Menu. And then we have a 10-course Chef Collection that is spontaneous. That’s completely up to what we buy that day.

Fodor’s: And you said that was 10 courses?

GK: About 10 courses. It changes with every guest. For example, we had two guests in and it was their 25th wedding anniversary, so we did 12 courses for him and 12 different courses for her. And then their 25th course was a dessert platter. People will joke, saying, “What if I come in for my 50th,” and I’m like: bring it on. If you can eat 50 courses, I’ll give you crumbs for the first 20 courses.