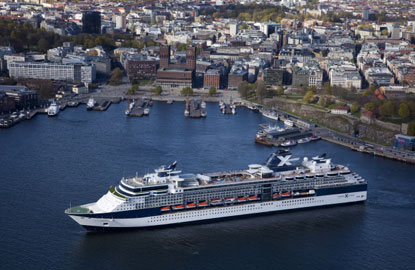 Over the past few years, cruise ships have increasingly become the (unusual) venue for themed events like concerts (hello, S.S. Coachella), murder mystery weekends, and food and wine festivals. Bravo and Celebrity Cruises are jumping on the bandwagon with "Top Chef: The Cruise."

The cruise will set sail on April 11–15, 2013 aboard Celebrity Constellation, inviting passengers to “spend quality time with the show’s chefs and judges.”

Tom Colicchio and Gail Simmons will (actually) host the cruise, which will also feature past chef-testants. While the schedule is still being ironed out, chefs like Hubert Keller, Tim Love, Jennifer Carroll, Tiffany Derry, Chris Hanmer, Michael Isabella, Spike Mendelsohn, Hosea Rosenberg, Angelo Sosa, and Casey Thompson have already been confirmed as guests.

While the 2,038-passenger Constellation is a Millennium-class ship, it’s been "Solsticized" to include favorites from the series of ships that includes Equinox, Eclipse, Solstice, Silhouette, and Reflection (which makes its debut this October). That means you’ll find the some of the same culinary options from Solstice class now aboard Constellation, including the ice-topped Martini Bar, Tuscan Grille, Bistro on Five, and Café al Bacio & Gelateria. 2013 will also see the debut of Celebrity’s popular AquaClass staterooms on Constellation.

The April 11 voyage sails round-trip from Miami with stops in Key West, Florida, and Cozumel, Mexico. Celebrity executives couldn’t be more excited about this new partnership with Bravo. According to Dondra Ritzenthaler, senior vice president of sales, "Not only is food a standout aspect of what we offer, but so are modern, of-the-moment experiences and the chance for guest to explore what they’re passionate about—just like what they get by watching Top Chef."