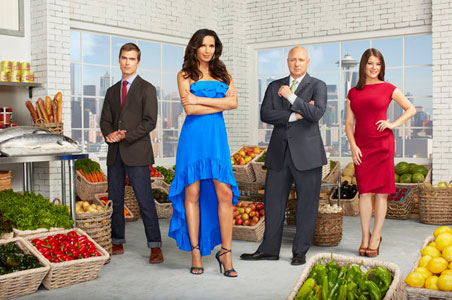 Anyone in NYC will want to open up a spot on their calendar between October 16 and November 18. On the heels of the announcement that Bravo Media will be sailing the high seas with the first-ever “Top Chef” cruise, it’s now high time for a pop-up restaurant.

The "Top Chef Kitchen" opens on October 16 at 211 W. Broadway in New York City’s Tribeca neighborhood as a partnership with Distilled NY, an eatery set to debut this winter. Naturally, the dishes will be prepared on-site by former chef contestants from the show. The list of chefs, who’ll be cooking two at a time for 6 days each, includes stars like Richard Blais, Jennifer Carroll, Tiffany Derry, Tiffani Faison, Mike Isabella, Edward Lee, Antonia Lofaso, Paul Qui, Grayson Schmitz, and Fabio Viviani. This event will also help kick off the 10th season of the show, "Top Chef: Seattle," which starts November 7.

In terms of cuisine—which is dinner only, Tuesday through Sunday—the four-course prix-fixe menu can be ordered with optional wine pairings for the full effect. "Chef’s Table" is a supreme option: an eight-course menu matched with wines, with the chefs popping by to say "hi" and get your feedback on the food (a la judge’s table). A full cocktail menu will also be available.

To reserve a spot at the table, first check out the schedule, then go to their OpenTable page and book it. Sooner than later, really.

All photos courtesy of Bravo TV and NBC Universal