News Ronny Maye Should You Cancel Your Vacation to an Area Impacted by a Natural Disaster?
NewsFrogs, Snails, and Cocktails: A Chat with Top Chef’s Dale Levitski 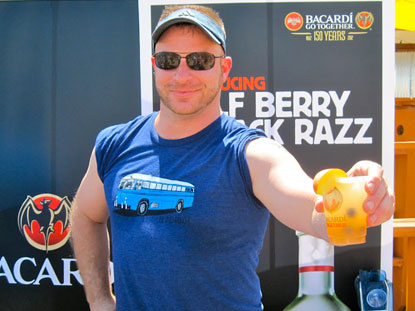 While in Chicago, we ran into Dale Levitski, executive chef of the highly-regarded Sprout and the newly-opened Frog n Snail. As the one-time Top Chef and Top Chef All-Stars contestant made cocktails for Thrillist’s Beachside Bash at the Oak Street Beach, we paused between sips to talk his new restaurant and what’s next on his ever-growing agenda.

Q: What am I drinking?

A: I don’t really have a name for it. I guess we can call it the Thrillist Beachside Bash. It’s Wolfberry Bacardi rum, ginger syrup, apricot puree, white wine, wolfberry rum, a little bit Sprite, and blueberries. It’s a white wine spritzer with a kick.

Q: Nice. Cheers! Congrats on the opening of Frog n Snail. I love the name.

A: Thanks. A lot of people didn’t get the name at first. It seems pretty obvious to me, though. Frogs and snails are very French foods. It’s also from the lullaby, "Little boys are made of frogs and snails and puppy dog tails…."

Q: I understand this is the first restaurant you’ve shepherded from conception to opening. What were some of the challenges you came across?

A: Challenge is par for the course for the way I work because I always do too much. I either use too many ingredients or I overthink things too much. So pulling back a bit for Frog n Snail was the challenge for me. Our food at Sprout is super complex and I’m trying to have a more approachable cuisine with Frog n Snail. The dishes are still complex but they are simpler in their concept.

Q: I heard a rumor that you were eyeing expansion in New York City already?

A: I would never say no to NYC. It is more of a dream concept than a reality right now, but what I’d love to do is open a breakfast place on Union Square. I love the farmers market there and I really like that area.

Q: Who is your pick to win Top Chef Masters?

A: I know Takashi, and I’ve been friends with Art Smith forever. So I’m rooting for them. When you become a master, some people are actively cooking in their game and some people aren’t, so it will be interesting to see how it pans out. I’m at that bubble point at how much longer am I going to be cooking in the kitchen because I’m doing more concept stuff now.

A: With this new celebrity chef age that we are in there is such an expectation of doing more, more, more at a faster rate, and some chefs just need to slow down, myself included. You can only do so much in a certain amount of time. A lot of those chefs on Top Chef Masters for example are legends now because they built on lasting legacies. They weren’t just contestants on a game show. A chef needs to prove himself in a restaurant first before expanding to that level. So I’m still burying myself in my restaurants for now.