News Larry Bleiberg You Can Finally Look Inside This Stunning D.C. Landmark. But Only for Another 25 Days
Home  >  News   >   Best in Brew: 3 Hoppy Cities

Talk travel: What is your favorite brewery in the U.S.? 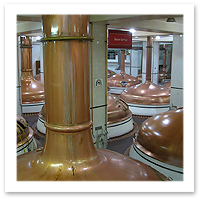 Denver, Colorado
Colorado is the land of both micro-breweries and megabreweries; unsurprisingly its capital is home to several of the state’s most noteworthy.

When Hunger Strikes: Wynkoop Brewing Company
Wynkoop’s flagship brew, Railyard Ale, and its spicy signature, Patty’s Chile Beer, are served alongside comfort foods like shepherd’s pie. On Thursday, Friday, and Saturday nights, laugh it off in the comedy club in the basement.

Signature Festival: Great American Beer Festival
Last year’s festival, which included 473 breweries, logged 46,000 attendees. Bragging rights for ’08 will be given out at this year’s festival over the second weekend in October.

Sudsy Side Trip: New Belgium Brewing Company
Fort Collins, 64 miles north of Denver
Famous for its Fat Tire brand, the New Belgium Brewing Company also crafts a few brews available only on-site at the “mother ship” (the employees’ term of endearment for their brewery). Free tours of the first 100% wind-powered brewery in the United States are first-come, first-served. Tours are offered Tuesday through Friday every half hour from 1p.m. to 3:30p.m. Saturday tours, which run every half hour from 11a.m. to 3p.m. can be crowded, so go early to ensure a spot.

From the Forums: “The New Belgium family of beers, including the flagship Fat Tire, in Fort Collins, CO has become something of an attraction for visitors from back home. So I consider New Belgium a new favorite.” — JRP (Read more member recommendations) 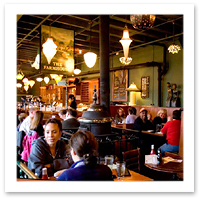 Brewery Tour: Widmer Brothers Brewing
Known to many for its wheat bear, Widmer Hefeweizen, the two brothers behind this brewery have been one of Portland’s favorite since they started in 1984. Free tours of the brewery are offered Fridays at 3 p.m. and Saturdays at 11 a.m. and 12:30 p.m. Reservations required.

Signature Festival: Oregon Brewers Festival
Over 60,000 revelers made it out for last year’s festival; 73 brewers will be at this year’s event, held July 21-24 at Tom McCall Waterfront Park.

Sudsy Side Trip: Full Sail Brewing Company
Hood River, 63 miles east of Portland
A glass-walled microbrewery with a windswept deck overlooking the Columbia, Full Sail Brewery has won major awards at the Great American Beer Festival. Pair an afternoon brewery tour with a morning ride on the Mt. Hood Scenic Railroad for a scenic and relaxing survey of Mt. Hood and the Hood River.

From the Forums: “But you really can’t go wrong with just about any brewery here in Beervana (Portland, OR). For folks to like to sample ’em all, come join us for the Oregon Brewers Festival, which is always held over the last full weekend in July. It’s a great event with microbrewed beers from all over the US – very laid back, and even family friendly, believe it or not. We always get there early, spread out a blanket under a tree on the waterfront, and spend the afternoon comparing tastes. You can’t beat it!” — miamatusow (Read more member recommendations) 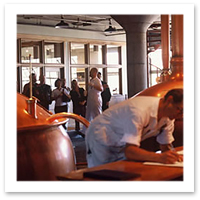 San Francisco, California
While it may be known for its proximity to the state’s most famous wine region, San Francisco has its share of beer lovers. Lucky for them, there’s plenty of spots to sample local favorites.

Brewery Tour: Anchor Steam Brewery, San Francisco
The 45-minute tour, offered once daily on weekday afternoons, covers three levels of the brewery and concludes with a sampling. Reservations are required.

When Hunger Strikes: Gordon Biersch Brewery and Restaurant
Goron Biersch is known for its German-style pilsners and brews–as well as what some have called the greatest garlic fires in creation. The outdoor seating area has killer views of the Bay Bridge, making this an ideal spot for an afternoon snack.

Sudsy Side Trip: Anderson Valley Brewing Company
Boonville, 115 miles north of San Francisco
The Anderson Valley Brewing Company prides itself on brewing “solar beer”; the brewery is powered with the help of 768 solar panels. The company’s star beers have names that borrow from the local lingo, Boontling, and include their Hop Ottin’ IPA.The brewery will host this year’s 12th Annual Boonville Beer Festival on May 10.

From the Forums: “Anderson Valley Brewing Company is a very no-frills type of brewery to visit. The tasting room setting is one of a large warehouse. Their beer is fabulous. I love their Winter Solstice (seasonal) as well as the Belgians they’ve been churning out (Brother David’s). Now that summer is approaching you’ll have Summer Solstice beer to look forward to…which is also very tasty.” — beanweb24 (Read more member recommendations)