Coronavirus David Silverberg Are Your Kids Heading Back to Summer Camp? Here's What You Need to Know
Home  >  News   >   9 Best Reasons to Visit Post-Olympics Vancouver 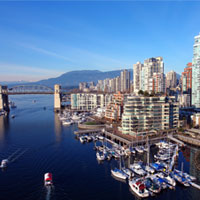 If you’ve caught any of the 2010 Winter Olympics television footage, you’ve seen the gorgeous Whistler mountain vistas and the vibrant Vancouver cityscapes, and heard about the now infamously temperate climate. Once the torch moves on, Vancouver should be extremely high on your list. Here are nine reasons to visit Vancouver and Whistler in the coming months.

It’s common for people to shy away from host destinations in Olympics years because they think it’s going to be too crowded. As a result, the opposite happens, and to combat low numbers, there are many bargains to be found. The Whistler/Blackcomb Web site has lodging deals, ski-and-stay deals, and even airfare deals. In addition to saving money, quieter slopes mean more fresh powder for you.

With upwards of 20,000 hotel rooms available in Vancouver for the Olympics, there are undoubtedly going to be vacancies, and some of Fodor’s favorite hotels are offering excellent limited-time post-Olympic discounts. For example, The Wedgewood is having a Spring promotion for the month of March. Check out the Tourism Vancouver Web site for more deals on hotel rooms and packages with hotel and entertainment, or spas.

If watching Apolo Ohno or the Chinese pairs skaters Shen Xue and Zhao Hongbo have got you regretting giving up your ice-skating career, you can live the fantasy and skate the same ice the Olympians did. The Richmond Olympic Oval, located just off the Canada Line, has a huge fitness facility with hard courts, ice, and an indoor track area. A one-day adult pass is CDN$12.50.

While it’s true that Whistler and Blackcomb have been North America’s top-rated ski destination for many years, summer holds bountiful opportunities for outdoor excitement.
Whistler Blackcomb was not only among the first to realize the potential of converting ski runs to fat-tire trails, they also established Whistler Mountain Bike Park, the best downhill-biking center in the world. Located on lower Whistler Mountain, the trails are marked green through double diamond and groomed with as much care as their winter counterparts. Beginners can find plenty of comfortable dirt lanes to follow and you can keep your fingers ready at the hydraulic brake to keep speeds under control. After their first taste of the sport, most novice riders can’t wait to sit back on the specially designed chairlift, transition onto the blue terrain, seek out a few bumps, and maybe grab some air before the day is through. For a less adrenaline-fueled bike ride, the 28-km (45-mi) paved, car-free Valley Trail links Whistler village to lakeside beaches and scenic picnic spots.

If hiking, rather than biking, is more your speed, the options are aplenty. Ski lifts whisk hikers (and bikers) up to the alpine, where marked trails are graded by difficulty. The brand-new Peak2Peak Gondola, the largest free-span gondola expanse in the world, crosses Fitzsimmons Valley to connect Whistler and Blackcomb mountains in just 11 minutes. The newest addition to the high alpine-trail network is the High Note Trail, an intermediate, five-mile route with an elevation change of 1,132 feet and fabulous coastal mountain views. Trails are clearly marked—take the lift up and choose whichever way you want to come down, just as if you were skiing. Free trail maps are available from Tourism Whistler.

6. The journey from Vancouver to Whistler is gorgeous

When it comes to Whistler, getting there is part of the experience. The scenery along the the 75 mile (2-hour) drive to Whistler is stunning, so make sure you do it during the day. You’ll take the aptly named Sea-to-Sky Highway (Highway 99) past fjordlike Howe Sound into the Coast Mountains, past the town of Squamish, into Whistler Resort. There are buses and limos from Vancouver if you want to leave the driving to someone else—and once you’re in Whistler, you won’t need a car, as anywhere you want to go within the resort is within a few minutes’ walk. The bases of Whistler and Blackcomb mountains are also just at the village edge. From mid-May through September, the Rocky Mountaineer train service can whisk you up the mountain in style, either in their full-length-window-domed railway cars, with panoramic views, or in their regular service cars.

7. Eating locally is a cinch

The concept of the hundred-mile diet originated in Vancouver, and the term “locavore” is virtually synonomous with Vancouver. In other words, if it’s fresh, in season, and locally grown, it’ll be on your plate. Check out Fodor’s latest restaurant reviews and you’ll understand why Vancouver is one of the hottest dining destinations in North America. And with a huge Asian population, it’s no surpise that Vancouver also has some of the best Asian food around.

Vancouver and Whistler are, each, the scene of many festivals worth planning a trip around, in all seasons. In Whistler, you’ll find everything from Cornucopia, the renowned food-and-wine festival spread over four delectable days in November, to the Telus World Ski & Snow festival, which takes the end of ski season out with a swoosh. For more Whistler festivals check out whistler.com.

In Vancouver, you’ll find everything from one of North America’s largest Chinese New Year celebrations, in February; to August’s MusicFest Vancouver, with two weeks of orchestral, chamber, choral, world music, opera, and jazz performances in venues around the city; to the Vancouver International Comedy Festival, in September; and the Vancouver International Film Festival, in September and October, which draws more than 150,000 people to view films from more than 50 countries.

For sports enthusiasts, the Bank of Montreal Marathon is in early May, the Scotiabank Half-Marathon and 5K are in June; and the popular Vancouver Sun Run (a 10K, with a minirun) is in mid-April. And every New Year’s Day means the Polar Bear Swim, when a phalanx of extremists plunge into the frigid waters at English Bay beach—often in costume.

If the Olympics opening ceremonies piqued your interest in the First Nations native peoples, there are excellent venues to learn and see more. In Vancouver, check out the Museum of Anthropology at the University of British Columbia, an architecturally spectacular building with displays of art from the Pacific Northwest and around the world, including dramatic totem poles and canoes; exquisite carvings of gold, silver, and argillite; and masks, tools, and textiles from many cultures. The Bill Reid Gallery, also in Vancouver, is named for one of B.C.’s pre-eminent artists. Displays include wood carvings, jewelry, print, and sculpture. The gallery may be small but its expansive offerings often include artist talks and noon-hour presentations. Bill Reid (1920–98) is best known for his bronze statue, “The Spirit of Haida Gwaii, The Jade Canoe”—measuring 12 ft x 20 ft, the original is an iconic meeting place at the Vancouver International Airport and its image is on the back of the Canadian $20 bill.

In Whistler, the Squamish-Lil’wat Centre is a cultural project put together by the neighboring Squamish Nation and Lil’wat Nation to preserve their cultural traditions and to allow others to learn about them. The on-site café serves contemporary food with a First Nations twist—think Lil’wat venison chili, a “mountain hoagie” with bison salami and wild-boar prosciutto, or a Caesar salad of romaine and Parmesan with bannock croutons—and is worth a visit itself.