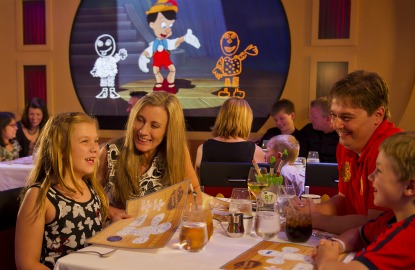 With the inaugural voyage of its newest ship, Disney Fantasy, just weeks away, fans are anticipating a vessel that is even more impressive than its predecessors. Fodor’s editor Doug Stallings recently got an insider’s tour of the ship’s technical program, or the mechanics behind the magic. What he found were technological innovations that take Disney merriment to a whole new level. These were the highlights:

My favorite of all the technical innovations has to be the "Animation Magic" show in the Animator’s Palate restaurant. When you sit down in the restaurant, you’re asked to draw a little character (you do have a form to use, and you have to stay in the lines). At the end of the meal, your character is actually animated and becomes part of the show. A "credits" reel follows. The technical innovation behind this is mind-boggling.

As you approach these pieces, which look like posters (some water colors, others more like paintings), they come to life and are animated. Some of the effects are subtle, but they are always delightful. Motion sensors know when you are standing near one of the artworks.

Embedded within the Enchanted Art is a detective game aimed at older kids. They pick up a badge and map, and when they wave their badge at the artwork, the animated game starts. It’s a fairly sophisticated, interactive experience and marks the first appearance of the Muppets on a Disney ship.

As was the case on earlier Disney ships, the portholes in all inside cabins show a real-time view of the ship (oriented toward the side of the ship where your "porthole" faces). Every few minutes, an animated Disney character will fly or swim by. Several dozen new animations have been added to the mix for Disney Fantasy.

Disney’s most sophisticated nightspot has been expanded for Disney Fantasy, offering a rotating series of nighttime cityscapes for seven different European cities. The high-definition photos themselves are stunning, but if you look closely, you’ll see that the cars on the streets and people walking and in building windows are all animated and are moving. The effect is subtle and amazing.

There’s much more, including a "Magic PlayFloor" in all the kids’ clubs that plays interactive games; an interactive experience with Stitch (I was told that Stitch will get to know the kids by the end of the cruise and will even be able to call them by name); and of course, the 700-foot-long water ride that travels around the perimeter of the ship from the back to the front funnel.