Deals Leila Najafi Attention West Coast: You Can Now Book Flights to Paris for as Little as $321
Home  >  News   >   5 Best Resorts for Ski Trips this Season 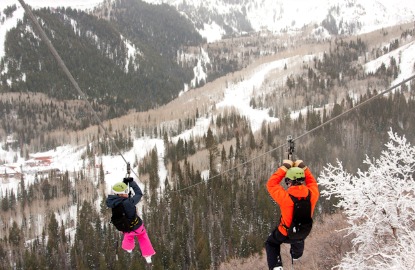 While the lack of snowfall across the U.S. and Canada has made this year’s ski season less than ideal, a host of resorts are riding all-time highs when it comes to new amenities and adventures. From zipline tours, to a free fall waterslide, to old-fashioned sledding, plenty of activities are available to keep you busy on and off the mountain. And for time away from the slopes, there’s a solid crop of new hotels, restaurants, and spas to try. Here are our top picks for the best places to plan a ski vacation this winter.

Park City, Utah is known for big snow and big stars, thanks to three ski resorts in town—Canyons Resort, Park City Mountain Resort, and Deer Valley Resort—and the Sundance Film Festival (running through January 29, 2012). But this season brings bigger adventures—or higher ones, anyway. The new, winter zip tour at Canyons Resort sends daredevils on a 2,100-foot, cross-canyon thrill ride; friends of daredevils can stick to the 800-foot treetop glide, or hop on Canyons’ heated Orange Bubble Express lift, the first of its kind in North America, and a cushier route to that bird’s-eye view.

Where to Stay: The Washington School House hotel just opened with 12 luxury suites, an exclusive après-ski lounge, and private dining, all in a historic downtown building just blocks from the Town Lift to Park City Mountain Resort. The year-old Montage Deer Valley, Utah’s first LEED-certified resort hotel, pairs a ski-in, ski-out location with perks like a ski valet who warms your boots.

Where to Eat and Drink: Salt Lake magazine’s 2011 Chef of the Year, John Murcko, was also the year’s busiest, overseeing the opening of locavore meccas The Farm and Bistro at Canyons Resort, and Slopes by Talisker at the Waldorf Astoria Park City. Follow dinner with craft spirits at High West Distillery & Saloon; try their new Silver OMG Pure Rye.

When it comes to sheer scale and skiable acres, Vail can’t be beat. And while other Colorado resorts were busy praying for more powder this season, Vail was being hammered with upgrades that could make upscale neighbors Beaver Creek, Breckenridge, and Aspen envious. Vail’s renaissance has ushered in a new generation of hotels, restaurants, and on-mountain activities that include kids’ ski lessons designed by Olympian (and local) Lindsey Vonn.

Where to Stay: The year-old Four Seasons Resort Vail is all nature-inspired luxury, from gas-burning fireplaces in guest rooms, to alpine treatments at the spa. The Sebastian is a year-old boutique option with its own spa and built-in nightlife at the Frost bar and Block 16 restaurant.

Where to Eat and Drink: You can’t go wrong sticking to this season’s crop of newbies: Matsuhisa Vail from chef Nobu Matsuhisa; Elway’s, the first local outpost of John Elway’s Denver eateries; and The 10th, a concept in ski-in fine dining. For a new beer that’s already a local legend, head down the road to Eagle, where Bonfire Brewing serves its Tebrew Sunday Sipper, an homage to Bronco quarterback Tim Tebow.

Good to Know: Mix spring skiing with live music during Vail’s SnowBall Music Festival (March 2-4). The lineup ranges from indie bands (The Head and the Heart), to DJs (Bassnectar), to Britpop (The Kooks).

Jay Peak, located in Northern Vermont about an hour and a half from Burlington, is well into a $250-million revitalization, and the jewel in Jay’s recast crown is the brand-new Pump House Indoor Water Park. It’s redefining "après" activities with a surf wave; climbing wall; activity river; and La Chute, the world’s only indoor AquaLoop (an enclosed, free fall waterslide). After the slides and the slopes—Jay Peak receives more snow than any other East Coast resort—you’ll need some serious relaxation. Luckily, the Pump House also has a poolside bar.

Where to Stay: The first 52 rooms at Hotel Jay just became available; homey touches include locally sourced bathroom products, a family room, and family-friendly rates (with grand-opening specials available through April 30, 2012). It’s also connected to the Pump House, so no need to freeze en route to the water park (or bar). The nearby ski-in/ski-out Tram Haus Lodge is equally atmospheric; it’s only two years old, but was built incorporating historic tram parts throughout.

Where to Eat and Drink: Alice’s Table at Jay Peak specializes in elegant, casual fare, like high-country barbecue. And in a nod to its famously friendly namesake, former resort employee Alice Lewis, Alice’s reserves one banquet table for communal seating each night. Next door, the hopping Tower Bar serves up specialty drinks like the Jayhattan. (It involves bacon-infused bourbon and Vermont maple syrup.)

Good to Know: Strap on some ice skates, or catch a hockey game or curling match, at the on-site, NHL-sized Ice Haus Arena.

Whistler Blackcomb, in British Columbia, has fully opened its Olympic facilities to the public. For the first time, visitors can take a bobsled or skeleton ride at the Whistler Sliding Centre, and ice skate past the Olympic cauldron at Whistler Olympic Plaza. On the slopes, the new Whistler Blackcomb Live mobile app allows guests to track their daily vertical; share their stats on social media; and check lift lines, trail conditions, and weather. And the weather’s fine, with Whistler darling La Niña delivering a deep base of snow this season.

Where to Stay: Large and luxurious, with a bevy of in-house activities and dining options including the brand-new Grill Room, the Fairmont Château Whistler Resort is hard to leave (but you barely have to, since it’s a ski-in, ski-out property just steps from the Blackcomb lifts). The Adara Hotel is a more intimate Whistler Village boutique hotel, with its trendy take on a traditional ski lodge.

Where to Eat and Drink: After just one year, Alta Bistro has earned well-deserved accolades for its seasonal dishes and lack of pretension (think mason-jar cocktails). Down in the Function Junction area, the Big Smoke Barbecue crew turns their Burnt Stew Café into the "Southern Soul Café" every weekend night, and features a special menu.

Good to Know: To carouse Whistler style, visit during the TELUS World Ski & Snowboard Festival (April 15–24) for a massive series of competitions, concerts, and art events.

New at Le Massif: A Trail for Old-Fashioned Sledding

Bragging rights to the highest vertical drop east of the Rockies belongs to Quebec’s famous Le Massif. And now, the resort has the best entrance in skiing: a luxury train from Québec City that hugs the St. Lawrence River on an hour-long trip replete with gourmet meals focused on regional gastronomy. The train is just one part of owner Daniel Gauthier’s $230-million plan to turn Le Massif into a bustling eco-resort. Gauthier was the co-founder of Cirque du Soleil, so you can bet Le Massif is over the top.

Where to Stay: La Ferme, the new eco-hotel, spa, and theater near the base of Le Massif, is scheduled to open by spring, 2012. Until then, Auberge La Courtepointe, at the base of Le Massif in Petite-Rivière-Saint-François, has 14 guest rooms in a stately mansion. Further away but accessible via the luxury train, the Fairmont Le Manoir Richelieu in La Malbaie is known for its grandeur—and the adjacent Casino de Charlevoix.