Coronavirus Leila Najafi Want to Stay in Costa Rica for Over a Year? A New Law Might Help You
Home  >  News   >   Top 5 Air Travel Complaints 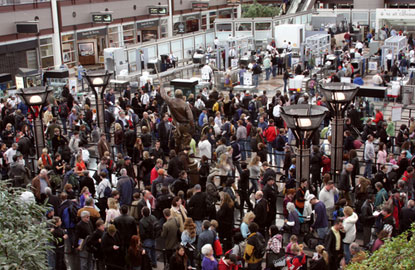 Flying can be a hassle. While cramped airplane seats rank high on the list of passenger complaints, according to a survey by the U.S. Transportation Security Administration (TSA), four out of five of travelers’ primary frustrations involved getting past security.

When the results were released last November, the TSA made some big promises to address complaints. Here are the top five, what the TSA is currently doing about them, and what you can do.

What the TSA is doing about it: Clarifying guidelines, including their 3-1-1 rule for carry-ons. Since major airlines began charging for check-in bags, more passengers are trying to stuff it all into carry-on, increasing the confusion at security.

What you can do about it: Not much you can do about other people’s baggage, but you can keep yours to the accepted minimum by checking the airline’s website for weight and measurement limits for the bag you can stash in the overhead compartment and the one you can stash under your seat. That will also help everyone get through security faster.

What the TSA is doing about it: This one is up to the airlines and, to some degree, passengers.

What you can do about it: Sign up for Expert Flyer’s seat alerts or download the free seat alerts app launched this month. If you book a fare on a full flight and it looks like you’ll be stuck in the dreaded middle seat, you can set up an alert that will let you know when an aisle or window seat opens up. Expert Flyer promises better seats 74 percent of the time. If you fly more than 25,000 miles a year, you should be angling for elite status on your favorite airline, the kind that will get you first dibs on upgrades to extra legroom seats, and even business class.

What the TSA is doing about it: TSA launched PreCheck last December, allowing U.S. citizens to volunteer information about themselves prior to traveling domestically, in order to expedite the screening process. As of this month, PreCheck is available at 21 airports for five airlines: Alaska, American, Delta, United, and US Airways.

What you can do about it: If you’re a member of the frequent flyer program of any of those airlines, sign up for Global Entry, a U.S. Customs Border Protection program that expedites clearance for pre-approved, low-risk travelers who can use automated kiosks upon arrival in the states. Expedited security is a perk of certain credit cards, such as the American Express Platinum and AAdvantage World Elite Mastercard.

What the TSA is doing about it: Last September, Homeland Security announced new scanning devices would soon allow us to keep our shoes on. But after spending millions testing them, including one currently used in 18 countries, the TSA rejected them for missing too many shoe-sized explosives. Development of a comprehensive shoe-scanning machine is in the works. For now, prepare to go shoeless.

What you can do about it: Wear slip-on shoes and no belts to the airport. Global Entry allows you to skip the strip as well as the gel/liquid bag removal.

What the TSA is doing about it: After allegations of racial profiling by TSA officers at Boston’s Logan International Airport this month, the TSA is retraining some workers. Complaints of inappropriate questioning came from fellow employees.

What you can do about it: Have boarding passes and ID in hand, laptops and quart-size bag of gels and liquids easily accessible. Don’t leave corkscrews or other pointy tools in your carry-on, forcing re-screenings and line jams. Be as cooperative as possible. Remember security staff may be surly partly because passengers are surly and often clueless. If you encounter pleasant and helpful agents, smile and thank them.

Or…anyone up for a road trip?