News Apeksha Bhateja It's a Tie: The 2 Most Annoying Airline Passenger Behaviors of 2022
News25 Things We Love to Do in D.C.

UPDATED June 10, 2011
The capital is not just about famous buildings and monuments. Where else can you see a Gutenberg Bible, visit a spy museum, eat Ethiopian cuisine, and see a tarantula feeding all in one day? Here’s a list of our favorite things to do in Washington, D.C. 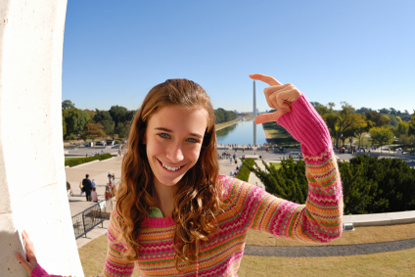 Washington, D.C. is the center of everything political in the U.S., and as such has never been short on intrigue and scandal. But beyond all the shenanigans you’ll find a rare city, one that balances truly rich history and culture within a dynamic and ever-changing urban setting. What do you recommend?

On the National Mall

1. See the original Spirit of St. Louis airplane that Charles Lindbergh flew from New York to Paris in 1927, and then learn how things fly at the National Air and Space Museum.

2. Watch films of flying saucers at the National Archives. (The films were used in Congressional hearings in the 1950s when people we’re convinced that aliens had invaded the country.)

4. Enjoy the National Gallery of Art’s sculpture garden with a fun seasonal experience. In winter, twirl around the ice-skating rink. In summer, enjoy exploring with some phenomenal gelato from the cafeteria between the building’s two wings.

5. Check out the latest addition to the thriving D.C. museum scene at the Newseum. Opened in 2008, this institution includes many interactive exhibits dedicated to the global history of news.

7. Check out the sometimes offbeat portraits of 20th-century Americans (Warhol’s Marilyn Monroe prints, a Time magazine cover of Madonna) on the third floor of the National Portrait Gallery.

8. Pose next to sculptures by Rodin and Henry Moore in the Hirshhorn Sculpture Garden and then venture inside to see one of the world’s great collections of modern art.

9. Learn how to make money — literally — at the Bureau of Engraving and Printing, where paper money has been printed since 1914.

10. Follow the lives of those who lived and died in Nazi Germany at the United States Holocaust Memorial Museum.

11. See giant pandas, elephants, and lions (and sloth bears and giant salamanders) at the National Zoo.

12. Top everything and anything with chili at Ben’s Chili Bowl, a U Street institution since 1958.

13. You have to plan weeks or months in advance, and you’re only allowed into eight of the 132 rooms, but there’s no denying the kick of touring the White House, if for no other reason than to fantasize about what you might do differently with the Green Room.

14. Watch congressmen and women debate, insult, and wrangle their way through the job of making laws in the Capitol. Start your explorations at the Capitol Visitor Center, a massive underground facility that debuted in 2008.

15. Pick up organic fruit and eclectic local crafts at the Eastern Market, which was restored to its Victorian splendor after a devastating 2007 fire.

16. Order a pint and listen in as Congressional staffers gripe about their famous bosses at the Hawk & Dove, the quintessential D.C. bar.

17. Take a break from debate to contemplate the Gutenberg Bible, the lavishly sculpted Great Hall, and the splendor of the gilded Main Reading Room at the Library of Congress.

18. Indulge your inner James Bond with a look at 007’s Aston Martin from Goldfinger, along with more serious toys used by the CIA, FBI, and KGB at the International Spy Museum.

19. Complete your Jackie O look at Nana, a D.C. favorite for its stock of new and vintage women’s clothes, handmade jewelry, and cool handbags.

21. Scope out the art scene on the first Friday of every month, when Dupont Circle’s art spaces are open late and score complimentary wine as a bonus.

23. View the heavens through one of the world’s most powerful telescopes at the U.S. Naval Observatory.

24. Wrinkle your nose at the Corpse Flower, explore the jungle, gawk at the orchids, or stroll the paths at the new National Garden at the United States Botanic Garden.

25. Celebrate happy hour at some classic capital haunts for staffers, lobbyists, and interns: the Vietnam-era Hawk and Dove or the enormous Capitol City Brewery.