Costa Rica’s forests hold an array of flora and fauna so vast and diverse that scientists haven’t even named thousands of the species found here. The country covers less than 0.03% of the Earth’s surface, yet it contains nearly 5% of the planet’s plant and animal species. Clearly this tiny country is an incredible places to visit.

With a little planning you can see everything that interests you—but making sense of the complicated interplay of climate and geography here takes time. Luckily you have us to help! And so, without further ado, a guide to Costa Rica’s diverse natural attractions.

Warm and wet, Costa Rica’s rain forest is the quintessential dripping, squawking, chirping, buzzing jungle. In this sultry landscape of green on green, birds flap and screech overhead and twigs snap under the steps of unseen creatures. All of the ingredients for life—water, sunlight, and more water—drench these areas.

Most of Costa Rica’s rainforest can be found across the Caribbean lowlands and on the southern Pacific Coast. 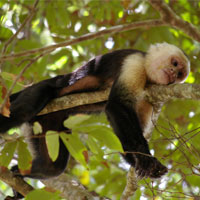 For a tame, up-close glimpse of the rain forest and some of its more photogenic inhabitants, Manuel Antonio National Park is a favorite. Located on the central Pacific coast, Manuel Antonio is one of Costa Rica’s most visited—and smallest—national parks. Capuchin monkeys, squirrel monkeys, and sloths abound. But despite the apparent vibrancy of life found here, Manuel Antonio is isolated, with no biological bridges to other forests, and threatened by encroaching development.

If anybody knows anything about the rain forest, it is the researchers at the La Selva Biological Station, situated in the midst of 3,900 acres of protected forest in the Caribbean lowlands. The station, run by the Organization for Tropical Studies, is one of the most important sites worldwide for research on tropical rain forest. The research station can sleep up to 80 people in dormitory-style rooms, and feed as many as 100 in the dining hall.

At the other end of the spectrum is Corcovado National Park, the remote, untamed jewel of Costa Rica’s biodiversity crown. Covering one-third of the Osa Peninsula, Corcovado National Park holds about one-quarter of all tree species in Costa Rica and at least 140 identified species of mammals, including the largest concentration of jaguars left in the country. Ranger stations and campsites are available for the more adventurous, and luxurious eco-lodges surround the park for those who don’t like to rough it.

As part of the Pacific Ring of Fire, the country has three volcanic mountain ranges: Guanacaste, Central, and Tilarán. There are around 300 volcanic points in Costa Rica, but only five have formed volcanoes that have erupted in recent memory: Turrialba, Irazu, Poás, Rincón de la Vieja, and Arenal. Costa Rica’s volcanoes are often the centerpieces of large national parks. 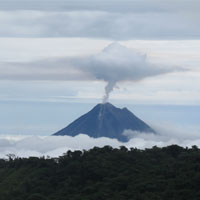 At 1,680 meters (5,512 feet), Arenal Volcano, rising on the northwestern plains of San Carlos, is every bit an awesome sight. Tall and perfectly conical, its sides are scarred by a history of violent eruptions and textured by decades of fl owing lava. Located at the northern end of the Tilarán Mountain Range, northwest of the capital, it is Costa Rica’s best-known volcano, its most active, and one of the 10 most active volcanoes in the world.

A mass of slopes, craters, and biodiversity that bridges the continental divide, Rincón de la Vieja is in Costa Rica’s arid northwest. It’s not the classic conical volcano, but rather a ridge made of a series of craters that include bare, rocky bowls with brilliantly colored lakes, and velvety cones covered in rain forest. The Rincón de la Vieja National Park covers nearly 35,000 acres and is a wonderland of volcanic activity that includes bubbling mud pits, hot springs, and geysers, as well as refreshing lagoons and spectacular waterfalls.

Poás Volcano is Costa Rica’s most visited national park, in part because it is the closest active volcano to the capital of San José and the Aeropuerto Internacional Juan Santamaría. Located in the Cordillera Volcánica Central Mountain Range, Poás is topped by three craters, the tallest reaching 2,708 meters (8,885 feet) above sea level. Only the main cone has shown any volcanic eruptions in the last 200 years. You can get a good look at the crater from the viewing deck.

The four mountain ranges that make up Costa Rica’s own piece of the continental divide split the country into its Caribbean and Pacific regions. At these higher altitudes, temperatures cool, clouds settle, and rainfall increases. The forests found here are shrouded in mist and rich in biodiversity. Welcome to Costa Rica’s famed cloud forests. 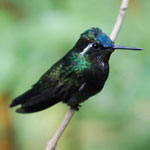 Costa Rica’s most famous cloud forest reserve is packed with an astonishing variety of life: 2,500 plant species, 400 species of birds, 500 types of butterflies, and more than 100 different mammals have been catalogued so far. Additionally, Monteverde encompasses 9,885 acres of cloud forest and rain forest. There are 13 km (8 mi) of well-marked trails, zip-line tours, and suspended bridges for canopy viewing, bird tours, guided night walks, and a field research station with an amphibian aquarium.

One of Costa Rica’s premier nature destinations, San Gerardo de Dota is a damp, epiphyte-laden forest of giant oak trees and an astonishing number of resplendent quetzels. Outdoor enthusiasts may never want to leave these parts—some of the country’s best hiking is in this valley, and it’s popular with bird-watchers. It’s also great for horseback riding and trout fly-fishing.

Descending from the Cordillera Volcánica Central Mountain Range, the Braulio Carrillo National Park is an awesome, intimidating, and rugged landscape of dense cloud forest that stretches toward the rain forests of the Caribbean lowlands. Elusive (and endangered) jaguars and pumas are among the many animal species here, and scenic viewpoints are plentiful along the highway. A handful of trails, including the Los Niños Circular Trail and the Los Guarumos Trail, can be taken into the park’s interior.

Wetlands are any low-lying areas that are perpetually saturated with water. Their complex ecosystems support a variety of living things—both endemic species unique to the area and visitors who travel halfway around the hemisphere to get here. Here, land species have evolved to live much of their lives in water.

The Ramsar Convention on Wetlands is an intergovernmental treaty to provide a framework for the conservation of the world’s wetlands. There are 11 Ramsar wetlands in Costa Rica: all are impressive but we’ve listed only our top three. 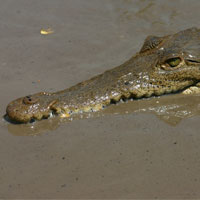 Within the Palo Verde National Park is perhaps Costa Rica’s best-known wetland—a system that includes shallow, permanent freshwater lagoons, marshes, mangroves, and woodlands that are seasonally flooded by the Tempisque River. A good portion of this 45,511-acre park is covered by tropical dry forest, but wetlands are prominent too. In fact, this park has 12 different habitats, creating one of the most diverse collections of life in the country. At least 55 aquatic plants and 150 tree species have been identified here, and the largest number of aquatic and wading birds in all of Mesoamerica can be found at Palo Verde wetlands.

Ninety-nine percent of mangrove forests are found on Costa Rica’s Pacific coast. But the best place to see some of the remaining 1% on the Caribbean side is Tortuguero National Park. Like Palo Verde, Tortuguero is home to a wide variety of life—11 distinct habitats in total, including extensive wetlands and mangrove forests. Beach-nesting turtles (tortugas) are the main attraction here, but the park is included in the Ramsar list of internationally important wetlands.

A third Ramsar wetland is found in the Caño Negro National Wildlife Refuge, in the more remote northern plains close to the border with Nicaragua. Caño Negro has a seasonal lake that can cover as many as 1,975 acres and grow as deep as 3 meters (10 feet). The lake is actually a pool created by the Frio River that dries up to nearly nothing between February and May. The park also has marshes, semi-permanently flooded old growth forest, and other wetland habitats.

Differences in the look of the sand, the quality of the waves, and the beauty of the backdrop all affect your beach experience. Costa Rica’s beach scenes are wildly diverse, so a little planning can go a long way.

This unique park is along one of the more remote stretches of coastline, on the southern end of the Central Pacific region, and encompasses several beaches. Ballena, which is Spanish for “whale,” gets its name for a peculiar sandbar formation at Playa Uvita beach that goes straight out toward the ocean before splitting and curving in two directions, much like a whale’s tale.

On the northern end of the Pacific, Manuel Antonio National Park shelters some of the country’s more precious beaches. A series of half-moon bays with sparkling sands are fronted by transitional forest—a combination of flora and fauna from the tropical dry forests farther north and the tropical rain forests that stretch south. Wildlife is abundant at Manuel Antonio, and the towering jungle at the beach’s edge can give the area a wild and paradisiacal feel.

The Caribbean Coast has an entirely different feel from the Pacific. North of Limon, there are miles of undeveloped, protected beaches where green sea turtles come from July to October to lay eggs. There have also been sightings of the loggerhead, hawksbill, and leatherback turtles. To the south of Limon, beaches are bordered by dense green vegetation all year long, and the quality of the sand can change dramatically as you wander from cove to cove. Some of the country’s healthiest living coral reefs are offshore, so snorkeling is worthwhile.