News Apeksha Bhateja India Is Experiencing a Brutal Heatwave. Here's Why It Matters to You
Home  >  News   >   Top 10 Reasons to Visit Minneapolis 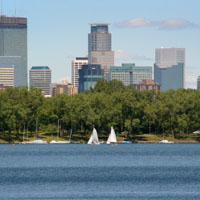 To many Americans, Minnesota is just another state in flyover country, somewhere between the East Coast and the Rockies, up there near Canada. But there’s much more here than moose, mittens, and snow, and Minnesota’s Twin Cities of Minneapolis and St. Paul consistently rank as two of the United States’ top cities to live in. Minneapolis’s thriving art scene, outdoor culture (even in the winter), affordable prices, and friendly atmosphere make this Midwest metropolis a perfect place for a weekend—or longer—escape.

From its nationally recognized names to small independent venues, Minneapolis is a vibrant arts city. In 2006, the Guthrie Theater opened a sleek new venue on the banks of the Mississippi River; even if you don’t catch a play here, it’s worth a visit to check out the complex’s cool design and river views. If live music is your thing, head to First Avenue & Seventh Street Entry, the focal point of the Twin Cities’ music scene. Prince, who is from Minneapolis, featured the club in his movie Purple Rain. Art enthusiasts will want to devote some time to exploring the Walker Art Center, which houses an impressive collection of contemporary art, as well as an outdoor sculpture garden. The Spoonbridge and Cherry sculpture has become an unofficial icon of the city.

Minnesota is known as the “Land of 10,000 Lakes” (though in reality there are closer to 12,000), and life here revolves around the water. Minneapolis means “City of Lakes,” and in the summer, walkers, runners, and rollerbladers flock to the city’s Chain of Lakes, including Lake Harriet, Lake of the Isles, and Lake Calhoun, which are connected by a paved trail that circles each body of water. Water sports abound, from canoeing to fishing to windsurfing, and you can catch free music at the Lake Harriet Bandstand all summer. In winter, the lakes still bustle with cold weather activities like ice fishing, cross country skiing, and of course, ice hockey. 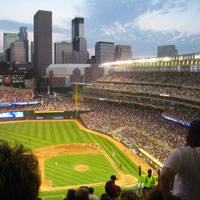 Come watch hometown hero Joe Mauer in action at the Minnesota Twins’ brand new open-air baseball stadium. The whole city’s buzzing about Target Field, a compact ballpark right in the heart of Minneapolis. The open construction of the stadium allows you to keep an eye on the field even as you head to the concession windows, which feature local favorites like North Shore Creamery, Mill City Grill, and Grain Belt beer. ESPN recently dubbed the new complex the best stadium in North America. Tip: Sit along the third base line for a great view of the field and the city skyline.

The Uptown neighborhood in southwest Minneapolis is a popular shopping and nightlife destination with a young, hip vibe. You’ll find funky boutiques mixed in among name-brand stores, popular eateries, and bars with some great happy hour specials. If you’re here the first weekend in August, check out the Uptown Art Fair, where you can browse and purchase works from local and national artists. Tip: Uptown is easy to get to from the city’s lakes. After a day at the beach, head to Chino Latino for fusion food and inventive cocktails, or to Sebastian Joe’s for an ice cream cone.

On the other side of the river, Northeast Minneapolis, formerly a working class neighborhood, is a hot up-and-coming district, home to a mix of immigrants, artists, and young people (due to its proximity to the University of Minnesota). The area’s diversity is evident in its burgeoning art, shopping, and restaurant scene. It’s a good spot to take in the newest art at local galleries, then reflect on the region’s older Polish and German roots with food and drink—and polka dancing—at Nye’s Polonaise Room.

Minneapolis owes much of its growth to the Mississippi River, which helped power the city’s prosperous mills. A visit to the Mill City Museum in an old flour mill on the riverbank outlines the city’s milling history. For more first-hand looks at the river’s importance, hop on a narrated paddleboat tour along the Mississippi, or take a locks and dam tour at St. Anthony Falls. Tip: For a great view of the city, walk across the historic Stone Arch Bridge, near the Mill City Museum. Once you cross the river, walk northwest along Main Street—you can stop to eat along the river, or hop on a Segway tour of the city.

Here you can ride a rollercoaster, watch sharks swim, eat in a rainforest, and indulge in some serious retail therapy—all without ever setting foot outdoors. The Mall of America is a popular spot for visitors to the Twin Cities, and so it can get pretty crowded, but it’s a great place to bring the family on a cold or rainy day. Kids love Nickelodeon Universe, Underwater Adventures Aquarium, and the four-story Lego store, while adults can browse over 500 stores. It’s not in Minneapolis, but it’s an easy drive or Light Rail from the city to the Mall. Tip: Minnesota doesn’t have sales tax on clothing, so go nuts! 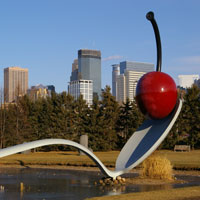 In recent years, Minneapolis has been rejuvenated with a host of cutting-edge design buildings. In addition to Jean Nouvel’s new Guthrie Theater, art galleries like the Walker Art Center and the Minneapolis Institute of Arts are works of art themselves. From the Walker’s asymetrical metal and glass expansion, designed by Herzog & de Meuron (who did the Tate Modern in London), to the MIA’s Target Wing by designer Michael Graves (who designs products for Target, the Minneapolis-based retailer), big-name talents have made their marks on the city’s skyline. The new Minneapolis Public Library opened in 2006, with a design by Cesar Pelli (who has designed some of the world’s tallest buildings). Designs on the building’s glass façade represent the state’s natural landscapes, and the green roof and rooftop garden make the building environmentally friendly.

Every year, for about twelve days surrounding Labor Day, over one million visitors flock to the Minnesota State Fair. The Fair, one of the country’s largest state fairs, celebrates Minnesota’s agricultural heritage with livestock and cooking competitions, concerts, and amusement park rides. But what it’s best known for is the food, which is often fried and served on a stick. Be sure to try one of the less likely options—fried spaghetti on a stick, anyone? The fairgrounds are actually located in St. Paul; in addition to parking there is bus service from both Minneapolis and St. Paul.

While summer is when many people visit Minneapolis, if you’re a hardy soul who can handle the cold (and we mean cold), you might be interested in the winter wonderland that the city becomes when the temperature drops. Minneapolis is built to handle the cold: most of the buildings in the city’s downtown core are connected by heated, enclosed “skyways” two floors above the ground, so you can visit restaurants, shops, and attractions without actually having to brave the elements. But unless the thermometer drops well below freezing, you can join the locals as they enjoy the snow, from ice fishing to pond hockey to an outdoor ice bar. From late November to late December, the city lights up with Holidazzle, a nightly parade down Nicollet Mall, a pedestrian-only street.

Tip: Winter is also a great time to catch some of Minnesota’s greatest sports action. Vikings football games at the Metrodome in Minneapolis are always exciting, but to get into the true Minnesota spirit, head to a hockey game. The state’s pro team, the Minnesota Wild, plays across the river in St. Paul, as do the popular Golden Gophers men’s and women’s college teams. Minneapolis is also home to some great hockey action, including the popular U.S. Pond Hockey Championships, held on Lake Calhoun in late January.

If you run out of things to do on your visit to Minneapolis, never fear—St. Paul, Minneapolis’s Twin City, is just a 15 minute drive away. There are many things to see here, including the State Capitol building, Como Park Zoo and Conservatory, and the Minnesota Children’s Museum. For more details see our St. Paul destination guide.

Minneapolis is served by the Minneapolis-St. Paul International Airport, with direct flights from most major cities. It’s easy to get around the city by car, and there are many parking garages, though they can be more expensive downtown and during sporting events. The city’s Light Rail train system is a convenient way to get downtown from the airport, and between certain locations in the city. For more information on public transit, go to: www.metrotransit.org. When the weather is nice, Minneapolis’s flat geography and ample bike lanes make it a great cycling city, and a public bike share program launched this year.