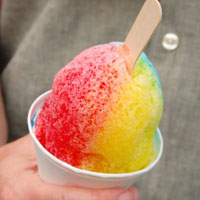 Food in Hawai‘i is a reflection of the state’s diverse cultural makeup and tropical location. Fresh seafood, organic fruits and vegetables, free-range poultry and meat, and locally grown products are the hallmarks of Hawai‘i regional cuisine. Its preparations are drawn from across the Pacific Rim, including Japan, the Philippines, Korea, and Thailand—and now, "Hawaiian food" is a cuisine in its own right. Don’t miss Hawaiian-grown coffee, either, whether it’s smooth Kona from the Big Island or coffee grown on other islands.

The ultimate hangover cure and the perfect comfort food during Hawai‘i’s mild winters, saimin ranks at the top of the list of local favorites. In fact, it’s one of the few dishes deemed truly local, having been highlighted in cookbooks since the 1930s. Saimin is an Asian-style noodle soup so ubiquitous, it’s even on McDonald’s menus statewide. In mom-and-pop shops, a large melamine bowl is filled with homemade dashi or chicken broth and wheat-flour noodles and then topped off with strips of omelet, green onions, bright pink fish cake and char siu (Chinese roast pork) and/or canned luncheon meat, such as SPAM. Add shoyu and chili pepper water, lift your chopsticks and slurp away.

Speaking of SPAM, Hawai‘i’s most prevalent grab-and-go snack is SPAM musubi. Often displayed next to cash registers at groceries and convenience stores, the glorifi ed rice ball is rectangluar, topped with a slice of fried SPAM and wrapped in nori (seaweed). Introduced back in the plantation days by Japanese field workers, musubi is a mini-meal in itself. But just like sushi, the rice part hardens when refrigerated. So it’s best to gobble it up, right after purchase. Hormel Company’s SPAM actually deserves its own recognition—way beyond as a mere musubi topping. About five million cans are sold per year in Hawai‘i and the Aloha State even hosts a festival in its honor. One local claims she can stretch a can of SPAM into three separate meals for a family of five. The spiced luncheon meat gained popularity in World War II days, when fish was rationed. Gourmets and those with aversions to salt, high cholesterol and high blood pressure may cringe at the thought of eating it, but SPAM in Hawai‘i is here to stay.

Another savory snack is manapua, fist-sized dough balls fashioned after Chinese bao and stuffed with fillings such as char siu pork and then steamed. Many mom-and-pop stores sell them in commercial steamer display cases along with pork hash and other dim sum. Modern-day fillings include curry chicken.

There’s nothing like fresh ‘ahi or tako (octopus) poke to break the ice at a backyard party, except, of course, the cold beer handed to you from the cooler. The perfect pupu, poke (pronounced poh-kay) is basically raw seafood cut into bite-sized chunks and mixed with everything from green onions to roasted and ground kukui nuts. Other variations include round onion, sesame oil, seaweed, and chili pepper water. Shoyu is the constant. These days, grocery stores sell a rainbow of varieties such as kim chee crab and anything goes, from adding mayonnaise to tobiko caviar. Fish lovers who want to take it to the next level order sashimi, the best cuts of ‘ahi sliced and dipped in a mixture of shoyu and wasabi.

Tropical fruits such as apple banana and strawberry papaya are plucked from trees in island neighborhoods and eaten for breakfast—plain or with a squeeze of fresh lime. Locals also love to add their own creative touches to exotic fruits. Green mangoes are pickled with Chinese five spice, and Maui Gold pineapples are topped with li hing mui powder (heck, even margarita glasses are rimmed with it). Green papaya is tossed in a Vietnamese salad with fish paste and fresh prawns.

It would be remiss not to mention the plate lunch as one of the most beloved dishes in Hawai‘i. It generally always includes two scoops white steamed rice, a side of macaroni and/or macaroni-potato salad, heavy on the mayo, and perhaps kim chee or koko (salted cabbage). There are countless choices of main protein such as chicken katsu, fried mahimahi and beef tomato. The king of all plate lunches is the Hawaiian plate. The main item is laulau (pork, beef and fish or chicken with taro, or lu‘au, leaves wrapped and steamed in ti leaves) or kalua pig and cabbage along with poi, lomilomi salmon, chicken long rice and steamed white rice.

The bento box gained popularity back in the plantation days, when workers toiled in the sugarcane fields. No one brought sandwiches to work then. Instead it was a lunch box with the ever-present steamed white rice, pickled ume (plum) to preserve the rice and main meats such as fried chicken or fish. In the Hawai‘i of today, many stores sell pre-packaged bentos or you may go to an okazuya with a hot buffet counter and create your own.

The Portuguese have contributed much to Hawai‘i cuisine in the form of sausage, soup and sweetbread. But their most revered food is malasadas, hot, deep-fried doughnuts rolled in sugar. Malasadas are crowd pleasers. Buy them by the dozen, hot from the wok, placed in brown bags to absorb the grease. Or bite into gourmet malasadas at restaurants, filled with vanilla or chocolate cream.

Much more than just a snow cone, shave ice is what locals crave after a blazing day at the beach or a hot-as-hades game of soccer. If you’re lucky, you’ll find a neighborhood store that hand shaves the ice, but it’s rare. Either way, the counter person will ask you first if you’d like ice cream and/or adzuki beans scooped into the bottom of the cone or cup. Then they shape the ice to a giant mound and add colorful fruit syrups. First timers should order the Rainbow, of course.

There are dozens of varieties of crack seed in dwindling specialty shops and at the drug stores. Chinese call the preserved fruits and nuts "see mui" but somehow the pidgin English version is what Hawaiians prefer. Those who like hard candy and salty foods will love li hing mangoes and rock salt plums and those with an itchy throat will feel relief from the lemon strips. Peruse large glass jars of crack seed sold in bulk or smaller hanging bags—the latter make good gifts to give to friends back home.