By Kara Williams, The Vacation Gals 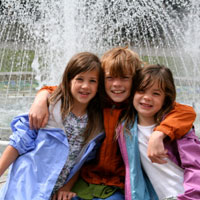 A sluggish-but-slowly-showing-signs-of-recovering economy won’t stop families from traveling in 2010—but we’re definitely looking for value in the trips we plan. That means we’re shopping for great deals and seeking locales that appeal to toddlers through teens all at once—and in some instances, they might be trendy destinations we see on TV or the big screen.

Here are The Vacation Gals’ Top 10 Family Destinations for 2010.

All eyes will be on Vancouver and Whistler in February during the Winter Olympic Games. I love watching the sports events on television, but I equally enjoy the little segments that show the area’s local color and sightseeing highlights. I bet images of Vancouver’s scenic coastline and the rugged Coast Mountains will result in a tourism boom. Vancouver offers active families opportunities to whale watch, kayak, and hike in the summer, and all sorts of snow sports in the winter.

I toured this diminutive Central American country last month without my family and often thought, “Boy, my kids would love this!” Climbing ancient Maya temples at Xunantunich (just a couple miles from the Guatemala border), snorkeling with sharks off of Ambergris Caye, ziplining through lush rainforest and “cave tubing” through bat-filled tunnels are all appealing to school-age kids (and adventurous grown-ups, too).

It was a sad day when Aloha Airlines and ATA ceased operation in 2008, shrinking the number of flights to Hawaii. But recently Delta, Continental and Alaska Airlines all announced new flight itineraries to Hawaii from the West Coast beginning in 2010. That’s good news for families, who flock to this perennial favorite for sun, surf and sand. What’s not to like about touring volcanoes, swimming in waterfalls and sipping frothy drinks under palm trees? The vast number of condominium rentals on the islands also makes this destination appealing for families who eschew cramming into double-bedded standard hotel rooms.

Sure, the “live music capital of the world” is a little hokey, but according to everything I’ve read about this touristy city, my kids would love it—from the permanent Titanic museum, to the plethora of mini-golf courses and go-kart tracks, to the area amusement parks. The Branson Airport debuted in 2009, with low-cost flights from AirTran and Sun Country. And 2010 brings a new zip-line tour and Branson Auto Museum, plus live shows “Yakov’s Moscow Circus,” “The Legend of Kung Fu” and “Cirque Montage,” aerobatics from Cirque du Soleil alumni. When you get your fill of man-made attractions, you can always seek out local lakes and recreation trails for fishing, boating, hiking, horseback riding and biking.

Oh, how tween-age girls (and their mothers) continue to pine for Edward or Jacob. The Twilight book and movie series have brought plenty of tourists to the Olympic Peninsula, particularly the towns of Forks, LaPush, and Port Angeles, where the action takes place. Organized tours and maps-for-purchase guide visitors to all of the must-see Twilight sites—but if you can draw your tween away from the key locations, take some time to enjoy the rainforest valleys, glacier-capped peaks and pristine wilderness of Olympic National Park.

Speaking of national parks, Ken Burns’ six-episode PBS television series “The National Parks: America’s Best Idea” motivated me and my dear college friend to plan and book our multi-family camping trip to Yellowstone this summer. The series (available on DVD) traces the history of the parks and highlights the people who fought hard to preserve the precious natural resources we have in the United States, but it’s the phenomenal panoramic images of the craggy coastline in Acadia, towering peaks in Glacier, and stunning wildlife in the Everglades that will no doubt draw other families to national parks this year. Can’t decide where to go? Consider road-tripping through the U.S. Southwest, where you can tick off several on your list in one vacation, with possible stops at the Grand Canyon, Bryce Canyon, Capitol Reef, Canyonlands and Arches. Camping is your cheapest option, but park lodges are reasonably priced, too. Visit nps.gov for more info.

With a new First Family in office, the nation’s capital is extra exciting to kids these days. It’s chock full of museums that interest school-age children, such as the National Air & Space Museum and the National Museum of Natural History, plus national monuments and the National Zoo. When you get your fill of patriotism, education, and historic sites, there’s a Six Flags America just 30 minutes outside the city in Mitchellville, Maryland.

Maybe it’s because we’re in the middle of the current holiday season, but I’m dreaming of the magical Christmas markets that take place throughout Germany in the weeks leading up to the December 25 holiday. Typically, the outdoor events are set up in a town’s main square, and each market is unique, reflecting the local region’s character. Under strings of twinkling white lights in a festive atmosphere, vendors sell handcrafted goods in their open-air stalls and kids munch on gingerbread and warm up with hot cider (I’m partial to hot mulled wine). Europe in the winter is always a steal compared to jacked-up hotel rates and airfares in the summer months.

Kids with picky palates are happy in Italy—after all what kid doesn’t like pasta, pizza or gelato (I suppose those on a gluten-free diet…). If I had my druthers (and an expansive bank account), I’d likely pack the kids up and head to Italy—hike around Cinque Terre, ride gondolas in Venice, introduce them to art in Florence. I might also angle for a packaged family vacation like those offered by Adventures by Disney: on one itinerary a night is dedicated to wine and olive-oil tasting for grown-ups while the kids are entertained by the accompanying Adventure Guides (sounds like my kind of trip). And the New Moon fans (yes, The Twilight Saga again) might appreciate a stop in the Tuscan city of Volterra, which plays a big role in the book and movie as the home to a coven of elite vampires.

Of course, I’ve got to give props to my home state, in particular the ski resorts in the glorious Rocky Mountains. Visit in the winter for stellar skiing and snowboarding in fluffy powder, plus ice skating, snowmobiling and dog-sledding (no lie). Summer, however, is when the Centennial state really shines, with blue-sky days and an arid climate. Most ski areas transform into playgrounds for families in the summer months, with slopeside “adventure parks” offering Frisbee golf, bungee trampolines and myriad hiking and mountain-biking trails.

Kara Williams goes by ColoradoGal over at TheVacationGals.com, where she blogs about travel with her buddies. Learn more about her at www.KaraSWilliams.com.