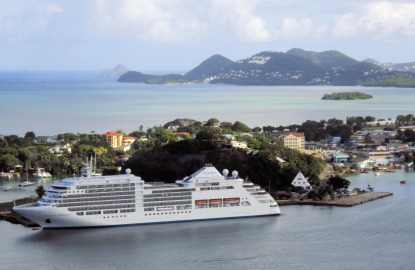 Winter doldrums weighing you down? Lighten up on a leisurely cruise. We’ve selected the best ships setting sail in the next several months, across all durations, price-points, and destinations. From far-flung expeditions to family adventures, spa retreats to cooking classes, the high seas are brimming with diverse experiences that will satisfy just about any interest.

Leave your cares (and kids) behind and reconnect with your partner in the sun-drenched Western Caribbean aboard Silver Spirit for ten idyllic days of R&R. This newest vessel in Silversea’s fleet features large suites, almost all with private verandas. The intriguing itinerary includes calls to Mexico and Belize, plus a visit to the lesser-known Santo Tomas, Guatemala, the gateway to Copan and Tikal, where over 3,000 Mayan temples are located. Onboard, concentrate on one another while being pampered in the 8,300 square-foot spa, the wine-focused restaurant Le Champagne, or the Art Deco-inspired supper club.

Best for: Couples who seek fine food, wine, and service. There’s never a need to sign a beverage charge ticket and the flow of Champagne seems endless.

For a last-minute adventure, book this South Pacific Discovery cruise, which begins with three days at leisure in Sydney, Australia, before flying to Brisbane to embark on Paul Gauguin—the most luxurious ship plying the South Pacific. Visit nine islands on five different archipelagos, including Fiji, Tonga, and the Cook Islands, before arriving in Tahitian waters to call at Bora Bora, Moorea, and Taha’a (Motu Mahana), best known as Paul Gauguin’s private South Seas paradise.

Cruising with Kids in the Caribbean

With Captain Mickey at the helm, the Magic Kingdom floats when Disney Magic sets sail for seven days to St. Maarten, St. Thomas, and Castaway Cay, Disney’s own private island. All the Disney favorites are on board for photo ops and character meals. Although there’s no casino, parents can enjoy some down time at the adults-only bars, pool, and spa, while the kids are entertained in supervised, age-appropriate activities. Trust us: they’ll never want to leave. Disney entertainment is wholesome, but not overly saccharine and nightly shows are designed with universal appeal.

Best for: Kids of all ages. Stay up late for the Pirates in the Caribbean deck party. Disney ships are the only vessels that present a fireworks show from on board while at sea, and it’s quite a spectacle.

Foodie Getaway in the Mediterranean with Jacques Pepin

Oceania Cruises’ new ship, Marina, will please foodies with its signature restaurant, Jacques. At the helm is celebrity master chef Jacques Pépin, who has served as Oceania Cruises’ executive culinary director for eight years. Sailing from Barcelona to Rome, Pépin will hold court in his namesake restaurant, as well as in the Bon Appétit Culinary Center, where he’ll conduct question-and-answer sessions, cooking demonstrations, and cookbook signings. Act quickly; the ship is nearly sold out.

Best for: Foodies with an affinity for classic French technique and Mediterranean flavors. Best of all, there’s no extra charge for a table in the fine-dining restaurant.

Details: Visit Oceania Cruises; departs from Barcelona, Spain, on May 12. Staterooms with veranda from $11,598 per person.

Once-in-a-Lifetime Expedition to the Antarctic

Board luxury expedition ship Silver Explorer in Ushuaia, Argentina, for ten days to sail though Drake Passage and explore the Antarctic Peninsula. In the true spirit of expedition cruising, each day the captain determines the best course on the flexible itinerary, taking into consideration the weather, ice conditions, and wildlife encountered. All excursions are included and when you take a Zodiac ashore to the South Shetland Islands (just off the Antarctic Peninsula) you’ll be greeted by the locals. Penguins, that is.

Sail Solo in the Eastern Caribbean

Single occupancy staterooms had almost disappeared from cruise ships and solo sailors found that going it alone meant paying a "single supplement" until the recent launch of Norwegian Cruise Line’s Norwegian Epic with its studio cabins. Sail through the Eastern Caribbean, calling on St. Maarten, St. Thomas, and the Bahamas in your own hideaway for one. The 100 square-foot studios include key card access to a shared private lounge with a bar, large-screen televisions, and communal seating, so you can hang out with other singles in a kid-free (and couples-free) environment.

Best for: Travelers who don’t want to pay a double fare when sailing solo.

Details: Visit Norwegian Cruise Line; depart from Miami on any Saturday in March. Studio fares from $799, depending on sail date.

Join Political Pundits on a Cruise across the Pacific

James Carville and Mary Matlin add a bit of election-year spice to the roster of celebrity guest speakers on Crystal Cruises’ Crystal Serenity "Great Northern Adventure" from Osaka, Japan, continuing to Russia, Alaska, and West Coast ports before docking in Los Angeles. The political pundits will be joined by expert lecturers covering everything from national security to U.S. foreign policy. Other onboard pursuits include memoir writing classes, pilates instruction, and golf lessons.

Best for: Travelers with a zest for learning about American and global affairs.

"Rock" the Boat Around Europe (Plus Morocco)

Classic rock meets classical music when Regent Seven Seas Cruises’ Seven Seas Voyager turns its spotlight on a "Rock Orchestra at Sea," playing the music of Steve Miller, and helmed by a well-known conductor. Even if you don’t love Steve Miller, the all-suite, all-balcony ship provides plenty of diversions, from the Canyon Ranch SpaClub and yoga classes to afternoon tea and the cigar bar. The fantastic itinerary is another draw, with calls that hit the highlights of Morocco, Spain, Portugal, and France, before landing in London during the exciting lead-up to the 2012 Olympics.

Best for: Europhiles who love the Steve Miller Band.

Girls Getaway in the Caribbean

There’s no better place to reconnect with the girls than on a Seabourn Sojourn Caribbean cruise. The year-old ship features an extensive spa (at 11,400 square feet, it’s the largest on any ultra-luxury ship), swanky bars and lounges, and intimate restaurants—what more could you ask for? Pushing this cruising experience over the top is the "Caviar in the Surf" beach barbeque where cruisers sip Champagne while splashing in the water at Isla Catalina, Dominican Republic. Don’t worry—you can work off the calories in the state-of-the-art gym later.

Best for: Girlfriends with a taste for luxury.

Details: Visit Seabourn Cruises; depart February 27 from Ft. Lauderdale, Florida. Fares start at $4,549 per person for an oceanview suite; add a veranda for an extra $400 per person.

Family Reunion in the Caribbean

When your extended family gets together for a reunion, consider the world’s largest cruise ship, Allure of the Seas, which is the newest ship in Royal Caribbean’s fleet. With experiences like the musical "Chicago" and the very first Starbucks at sea, plus DreamWorks characters from Shrek and Kung Fu Panda roaming the ship, there’s plenty of multigenerational appeal. Weekly sailings from Ft. Lauderdale, Florida, to the Eastern or Western Caribbean offer extensive accommodations to match any budget, and activities for all ages. Adults will enjoy the spa, adults-only pools, and the ship’s 25 restaurants, while kids will be entertained by the amusement park (with a working carousel), surf simulator, and ziplining adventure.

Best for: Large groups. Everyone will get a satisfying vacation at sea without feeling limited by dining or entertainment options.

Fodors.com contributor Linda Coffman has been dishing out cruise-travel advice for nearly two decades and is the author of Fodor’s Complete Guide to Caribbean Cruises, as well as a contributor of cruising content to other Fodor’s guidebooks. You can find her at CruiseDiva.com and the Cruise Diva blog.