News Sorrel Moseley-Williams The New President of Chile Has Chosen a Very Unusual Place to Live
NewsToday’s Top Headlines: May 7, 2012 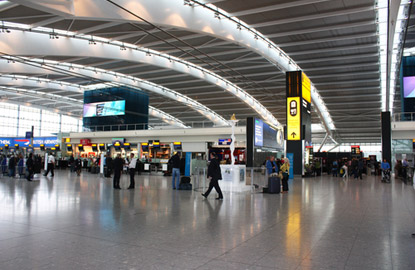 Heathrow looks to straighten up its act after long lines infuriate flyers (since the Olympics haven’t even started yet); Orbitz got a new look this week, while Rick Santorum is likely happy to be back in his own bed and making his own breakfast; drag queens help you bowl in Las Vegas; Starwood is making moves in the Middle East; and a tiny Swiss village becomes a Facebook phenom. Here are the headlines we’re reading today.

For the last few weeks, London’s Heathrow Airport has come under fire for chaotic, multi-hour lines just three months before the Olympic games. But The Daily Mail reports that, in order to alleviate winding lines, Heathrow has ceased drug and arms screenings on passengers. Of course, this lack of border control has only managed to increase safety concerns. {The Daily Mail}

Orbitz’s CEO announced today that the site underwent a much-needed "face lift" and that with the updated site, they’re rolling out a new ad campaign and brand message. So more than just being one in a handful of go-to mega-sites for booking travel, Orbitz wants their customers (whom they call "travel lusters") to know that they too love to travel. And the new site is noticeably more experiential with bigger photos and a bold design. {USA Today}

Rick Santorum’s campaign hotels had to include free breakfast.

Now that he’s out of the race, Rick Santorum is spreading truths about his campaign trail, and none of them are lined with glamour or fortune. He told MSNBC, "I don’t think anybody understood how little money we had." As a result, the only thing he required from hotels along the trail to make sure they saved a penny was that they included free breakfast. Staffers apparently had to share rooms at inexpensive hotels along the way, too. {MSNBC}

The Las Vegas Strip got even brighter this weekend with the opening of Drink & Drag, a new drag queen bowling alley. The venue is 22,000 square feet featuring a full bar, 12 bowling lanes, and table games (like billiards, air hockey, and more), as well as, of course, 24 full-time drag queens on staff. {KTNV; USA Today}

A tiny Swiss village called Obermutten (population pre-campaign was 78) has taken social media efforts to new heights, competing with household names like Lady Gaga and Justin Bieber. Obermutten launched a Facebook campaign last year saying that anyone who "liked" the page would have their photo posted to the official notice board in the center of town. Shockingly the number of likes climbed higher than 18,000 so far and photos of their Facebook fans now grace the walls of not only notice boards, but on the sides of buildings as well. Here’s a video about it all. {TNooz}

The iconic and celebrity-packed Beverly Hills Hotel turns 100 this month and is set to celebrate in style. The property’s anniversary is May 12, so in time for its centennial, the hotel’s official historian (and great-grandson of its founder) is releasing a new book, called "The Beverly Hills Hotel and Bungalows — The First 100 Years." They will also roll out a series of specials, like the "These Walls are Talking" cocktail menu at the Polo Lounge, which will include a 100-year cocktail priced at $100, served in an engraved collectible glass coupe. {Washington Post}

Starwood looks to the Middle East.

According to the Associated Press, Starwood Hotels and Resorts plans to open 40 new hotels in the Middle East over the course of five years. The first hotels on the docket include four new properties in Dubai, an Aloft hotel in Sharjah, and Sheraton hotels in Tajikistan, Algeria, and Iraq. The move comes as a result of their projection that tourism to the region will double from nearly 80 million last year to 195 million by 2030. They currently have nearly 70 hotels in the area, the first being a Sheraton in Kuwait that opened in 1966. {Associated Press}