Thailand is called the Land of Smiles, and after spending time in the nation of gilded Buddhist temples, vibrant food, and virgin beaches, it’s easy to see why. One smiles at Thailand, and the country smiles back, from the hotel concierge to the papaya peddler to the Royal Police, whose khaki-green uniforms crinkle like crepe paper as they salute each farang (foreigner) that crosses their paths. Locals stop, bow, and say "sawadee," the lyrical Thai greeting. And they’re just the strangers one might see on the street.

There are three lavish Thai hotels really take Thailand’s inherent welcoming and service to another level: the Four Seasons Resort, Koh Samiu; Peninsula Bangkok; and the Rayavadee Resort. Each resort sits in wildly differing locales—the legendary beaches of Koh Samui, the bustling city-scape of Bangkok, and the secluded and scuba-friendly Andaman coast—but they all share the Thai passion for full-tilt luxury service. 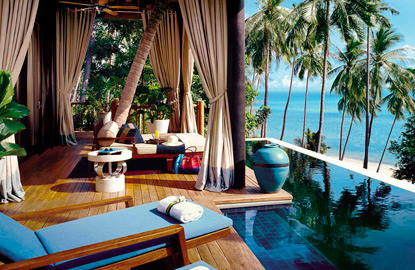 "The people are what separates Thailand from other Asian destinations," says Brent Martin, general manager of the Four Seasons Resort, Koh Samui, (a Fodor’s Choice hotel) where the service is as legendary and vibrant as the 150 species of flowers in the resort’s Technicolor landscape. "Thais take genuine pleasure in taking good care of others."

We talked over curried soft-shell crabs at Pla Pla, the Four Seasons’s beachfront restaurant, where the staff carefully swirled about the teak tables. Just beyond, on the beach facing Laem Yai Bay, they dole out chilled, minted cloths and coconut tonics to Swedes in Vilebriquin bathing suits and tanned Italians whose dark-haired children played soccer between thin coconut palms.

Before the hotel opened in 2007, the hillside was occupied by a coconut plantation with more than 850 palms, all of which were preserved by the Four Seasons. Now, the coconut’s nectar is drizzled into oatmeal at breakfast and massaged into scalps during the pressure point Shiro Abhyanga treatment at the jaw-dropping spa. The resort also offers the only private beach access on the island.

A fleet of electric buggies is the only means of transportation at the resort. Trails cover the hillside, connecting the dramatic entrance with the rest of the resort below. As you pass, a staff member smiles and bows, likely delivering buttered popcorn and a DVD from the resort’s complimentary library. They’re incredibly obliging—they’ll charter their private clipper SIAMSEAS for snorkeling trips around the barrier islands or organize a trip to the Ban Chaan elephant camp. 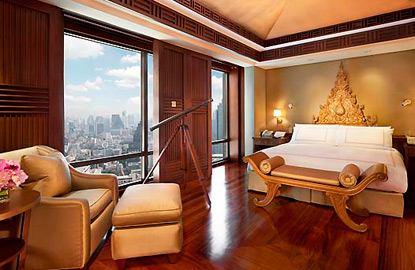 For guests of the storied Peninsula Bangkok, not only a Fodor’s Choice hotel but listed among the Fodor’s 100 in 2011, the pampering starts just past baggage claim at the sleek new Suvarnabhumi International Airport. A polished porter guides you to a chauffeured hunter-green Mercedes S280L waiting for you curbside, with cool washcloths scented with jasmine inside.

Though it opened in 2006, Peninsula has a timeless aura. Bangkok can induce sensory overload, which makes the hotel’s serenity, sophistication, and service, that much more important. On arrival, guests booked into one of the hotel’s 60 lavish suites are sent upstairs for in-suite check-in, with skyscrapers and the choppy jade Choa Phraya River out the window. Check-in is quickly followed by an alfresco breakfast of passion fruits, pistachio pastries, and thousand-year-duck eggs at the River Café.

The service knows no bounds in the spa, by ESPA, either, where before a rigorous Thai massage, the therapist warns, "you’re going to be sore tomorrow." Somehow their lyrical language makes it sound like a lovely prospect.

The hotel will then arrange a trip on an iconic longtail boat upriver to Wat Pho, Thailand oldest and largest temple, where visitors circle the 151-feet-long, 49-feet-high, gold-plated Reclining Buddha with gaping mouths. Fashion-seekers will find enlightenment at Bangkok’s sleek Siam Paragon Mall, a five-level cathedral of commerce complete with a 14-screen multiplex, aquarium, and 5000-seat opera hall. 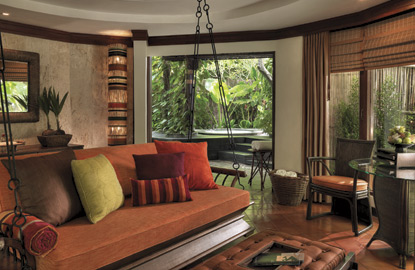 Skipping across the Andaman Sea in a Yamaha speedboat, bustling Bangkok could not feel further away. On the mainland, Phranang Beach, named for the legend of the shipwrecked princess whose spirit is said to haunt the limestone grottos, falls away. James Bond Island, named for its role in the 1974’s The Man with the Golden Gun, glitters off in the distance.

Here, each isand (or koh in Thai) juxtaposes trim tidal beaches and towering limestone cliffs against the turquoise sea. The geography is common off the west coast of Thailand, where the Rayavadee Resort (a member of Leading Small Hotels of the World) sits on a 26-square-acre, shark fin-shaped cape on the fringe of Krabi National Marine Park.

The resort takes full advantage of its stunning location, offering speedboat excursions as well as sunset cruises in vintage, red-sailed junk boats. They’ll take guests out toward Tub and Mor islands where, for just a few hours during low tide, they can walk between the two keys on a shallow white sandbar.

Whether island-hopping or just relaxing by the cliff-framed pool, pineapple kebabs in hand, it’s difficult to imagine the area ravaged by the 2005 tsunami. These days, the path that crosses the lush, grassy property is occupied by smiling staff members passing by on vintage bicycles.

Yellowed antique maps of the old empire hang in the spacious, tropical-chic bedrooms of Rayavadee’s 98 freestanding pavilions outfitted with neat design quirks like a coffee trays that swivel to reveal minibars and a walk-through wardrobe connecting bedroom and bathroom.

When it’s time to leave, the Rayavadee staff escort guests back to Krabi’s new international airport. They check you in, see you to security, perhaps resolving an overweight baggage snafu in the process. "Maybe you took too much sunshine back with you in your luggage?" one staff member asked.

Or maybe think of these three resorts as three steps; repeat as needed.

Travel Tip: Fly to Hong Kong directly from New York and Los Angeles on Cathay Pacific. Continue onto Bangkok on Cathay or one of Asia’s low-cost carriers.

Thinking of a trip to Thailand?

For up-to-the-minute hotel and restaurant recommendations, plus the best planning advice, check out our online Thailand Travel Guide.