Deals Leila Najafi Attention West Coast: You Can Now Book Flights to Paris for as Little as $321
Home  >  News   >   Thompson Chicago Blows Into the Windy City 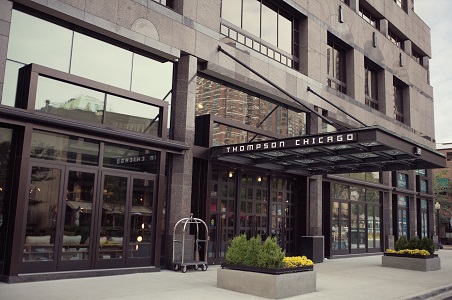 Tucked into the tony Gold Coast neighborhood, the 247-room Thompson Chicago (formerly the Sutton Place Hotel) opened its doors in early October as the first in a string of luxury boutique hotels slated to debut in Chicago over the next six months (The Godfrey Hotel and Kinzie Hotel are both set to open in early 2014).

In each room, guests will find plush perks like rain showerheads and REN bath amenities, along with views over Lake Michigan or the city skyline. British designer Tara Bernerd was tapped to develop an interior decor concept over the six room categories (of which three are suite-sized), showcasing clean lines and furnishings that remind of Mid-century Modern with a palette of neutral hues like grays, tans, and creams. Bold colors and lots of texture are also hallmarks in Bernerd’s design scheme. 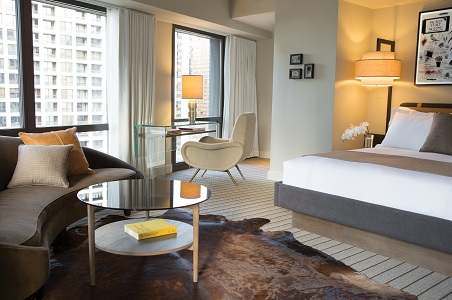 Guests also have access to complimentary luxury car service and free Wi-Fi, as well as a 1,000-square-foot fitness center. (Plus, Thompson Chicago is a pet-friendly property for those with furry guests in tow.)

Beyond the sleek, wood-paneled lobby is hotel eatery Nico Osteria, which began dishing out Italian-themed seafood entrées on December 2. Menus at this newest eatery from the One Off Hospitality Group—which is also behind highly acclaimed Chicago restaurants Blackbird, The Violet Hour, and The Publican—are led by James Beard Award Winner for Outstanding Chef Paul Kahan, who earned the title earlier this year while cooking at Blackbird. At Salone Nico, a wine list focused on small producers from Italy and Greece is offered alongside aperitifs and cocktails.

Kristine Hansen is a freelance writer based in Milwaukee where she reports on food, wine, and travel topics around the globe for Fodors.com, along with new hotel openings. She also writes for Wine Enthusiast, TIME, Whole Living, and American Way. In 2006, she co-authored The Complete Idiot’s Guide to Coffee and Tea (Alpha Books/Penguin). You can follow her on Twitter @kristineahansen or through her web site.