News Larry Bleiberg You Can Finally Look Inside This Stunning D.C. Landmark. But Only for Another 25 Days
Home  >  News   >   Overlooked and Underrated: Thessaloniki, Greece 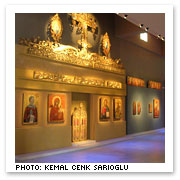 It’s one of Greece’s most haunting destinations…

Why: The port city of 1.5 million retains an astounding sense of neighborhood and a distinct Balkan feel. In fact, it’s hard to go a block in any direction without spotting a Roman or Byzantine monument. The city also has great food, lively nightlife, and a host of museums, from the revamped Archaeological Museum (Manoli Andronikou 6), which displays the weapons of Alexander the Great’s empire, to the icon-filled Byzantine Museum (photo right). The historic Jewish Museum has objects rescued from the 32 synagogues that existed around the city, some of which were destroyed by nazis. 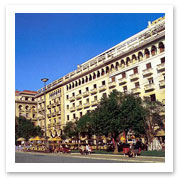 Worth Doing: Stroll along the waterfront from Aristotle Square to the 15th-century White Tower (photo right), which stands like a huge chess piece on the harbor (the interior will be undergoing an extensive renovation starting June 2006). Visit the quaint Ano Polis (Upper City), with its Byzantine walls, taverns, and winding streets. Take a day trip to Vergina (43 miles) to explore the royal family tombs of Alexander the Great’s father. There is swimming in Agia Triada (20-30 minutes southwest of the city in the Thessaloniki Gulf) and the Chalkidiki peninsulas (45 minutes to 2 hours to the southeast), and there are plenty of hiking opportunities on biodiverse Mt. Olympus (62 miles south of Thessaloniki near the town of Litohoro), the birthplace of the gods. 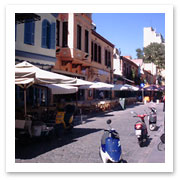 Don’t Leave Without: Buying food items from the 1920s glass-covered Modiano Market (the block is bounded by Aristotlesou, Ermou, Irakliou and Komninon). Also, put aside time to shop for jewelry, books and knick-knacks on Dimitriou Gounari Street, near the crépe shops and sunken antiquities of Navarinou Square. If time (and wallet) permits, consider investing in contemporary Greek art or antiquities at the family-run Kalfayan Gallery. 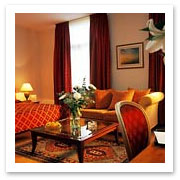 Where to Stay: Behind the central Tourist Hotel’s magnificent 1925 facade are rooms with high gold-trimmed ceilings. Doubles are 70-90 euros per night. Nearby Le Palace (pictured right) is favored by business travelers, who breakfast at the hotel’s elegant restaurant while watching the city wake up on the street below. Doubles are 109-159 euros per night. If you’re going all out and money isn’t an issue (aren’t you lucky!), hang your hat at Capsis Bristol, with its opulent rooms named after Macedonian luminaries—Alexander the Great, Perseus, Aristotle. Do ask about half-price summer discounts. 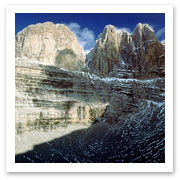 When to Go: There’s plenty to do year-round in Thessaloniki, from hiking up Mt. Olympus (photo right) to swimming, sunbathing, shopping, and of course, museum-going. Remember that winters in northern Greece are harsher than those in southern Greece, and do book early if your visit overlaps with the huge September trade fair or the November Thessaloniki International Film Festival.

How to Get There: Aegean Airlines and Olympic Airlines have many daily flights from Athens and a few foreign cities. Trains from Athens’ Larissis Station take 4 to 8 hours, depending on the train and price (from 15 to 50 euros, one-way). The journey from Athens by car or bus (from KTEL Kifisso station) takes 7 hours on the National Road.