News Apeksha Bhateja A Volcano Eruption Taught Me Something Unexpected About Travel
Home  >  News   >   Go to Jail — 4 U.S. Slammers Worth a Look

Dark as it might sound, some of America’s most diverting attractions are its former prisons. Each has an important place in American history, and if nothing else each is a great reminder to every traveler just how nice it is to go home. 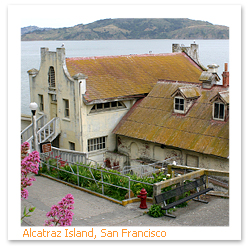 In 1775, Spanish explorer Juan Manuel de Ayala sailed into San Francisco Bay and named the 12-acre, guano-splattered hump he discovered Isla de los Alcatraces after the island’s abundant pelican population. In 1853, construction of a military garrison began, and in 1861 the island was put to use as a military prison for Confederate sympathizers and unruly U.S. soldiers.

From 1933 to its closure in 1963, Alcatraz was the most notorious federal penitentiary in the United States. Famous guests included Machine Gun Kelly, Al Capone, and Robert Stroud, the Birdman of Alcatraz who, in fact, did all his bird research at Leavenworth before he was sent to Alcatraz for a prison murder.

After a scenic ferry ride from Fisherman’s Wharf, visitors are set lose on the Rock to explore on their own. Climbing up the grim hill through the sally port, most people head straight for the large cell block on the top of the island. There they wander through the hospital ward, cafeteria, recreation yard, and solitary confinement in “D” block, where bullet holes in the wall testify to a bloody prison uprising in 1946.

The extraordinary getaway of Frank Morris (portrayed by Clint Eastwood in Escape from Alcatraz) and the Anglin brothers in 1962 hastened the prison’s closure the following year. After the last prisoners were transferred elsewhere, the Rock was again left to the pelicans, until, in 1969, a group of Native Americans took over the island, citing an 1868 treaty granting them the right to claim uninhabited federal land. On October 12, 1972, Alcatraz became part of the Golden Gate National Recreation Area.

If you visited Alcatraz prior to December 2006, consider touring it again. The Audio Tour “Doing Time” has been extended and includes new stories, and the National Park Service recently has completed renovations to the island and cellhouses, including the installation of an elevator that allows visitors to tour areas that were once inaccessible.

Visitor Information
For additional information on schedules, prices, and to purchase tickets in advance (tickets are made available about 30 days in advance and often sell out early) visit the Alcatraz Cruises website or call 415-981-ROCK. Plan your schedule to allow at least three hours for the visit and the round-trip. Tickets for adults (including the audio tour) cost $21.75; for children, $13.75.

During more than a century of operation, more than 13,000 inmates saw the inside of the prison, known locally as the Old Pen. Among them were gubernatorial assassin Harry Orchard, who was sentenced to life imprisonment in 1908 and who died here in 1954 at the age of 88; and Lyda “Lady Bluebird” Southard, who served 19 years for poisoning her fourth husband (the first three husbands died mysteriously).

A series of riots in protest over living conditions persuaded state officials to open a new penitentiary in south Boise in 1973. Barely a year later, the Old Pen was admitted to the National Register of Historic Places. Today owned by the Idaho State Historical Society, it is operated as a series of museums.

Guided or self-guided tours of the prison grounds permit inspection of several cell blocks, including the cramped women’s ward and the cells of Death Row. The cell blocks have been left exactly as they were after the 1973 riot; scorched stone walls, tiny cells with calendars still in place, and metal bunks evoke the spirit of the place. 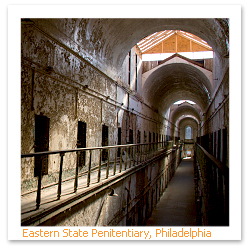 Eastern State was built in 1829, and was at the time the most expensive building in America. It influenced penal design around the world and was the model for some 300 prisons from China to South America.

The massive hulk, with 30-ft-high, 12-ft-wide walls and a hub-and-spoke floor plan, was created to promote a revolutionary and controversial concept: the reform of prisoners through solitary confinement, in accordance with the Quaker belief that if prisoners had light from Heaven (in their private exercise yard), the word of God (the Bible), and honest work, they would reflect and repent. Charles Dickens came to America in 1842 to see Niagara Falls and Eastern State; he became its most famous detractor, insisting that solitary confinement was cruel.

Before it closed in 1971, the prison was home to Al Capone, Willie Sutton, and Pep the Dog, who killed the cat of a governor’s wife. The guides on the hourly tours of the unrestored structure (you must wear hard hats) tell terrific anecdotes and take you on a visit to Death Row. The penitentiary, just a half mile north of the Rodin Museum, hosts changing art exhibitions and there are Haunted House tours in October.

This structure was built for the most part by the convicts who were incarcerated here from 1876 until 1909, when the prison outgrew its location. The hilly site on the Colorado River, chosen for security purposes, precluded further expansion.

Visitors gazing today at the tiny cells that held six inmates each, often in 115-degree heat, are likely to be appalled, but the prison was considered a model of enlightenment in the early 20th century: In an era when beatings were common, the only punishments meted out here were solitary confinement and assignment to a dark cell. The complex housed a hospital as well as Yuma’s only public library, where the 25 cents that visitors paid for a prison tour financed the acquisition of new books.

The 3,069 prisoners who served time at what was then the territory’s only prison included men and women from 21 different countries. They came from all social classes and were sent up for everything from armed robbery and murder to violation of the Mexican Neutrality Act and polygamy.

The mess hall opened as a museum in 1940, and the entire prison complex was designated a State Historic Park in 1961.