News Apeksha Bhateja Europe's Airports Are Chaos This Summer. And Now There's Another Problem
Home  >  News   >   The World’s Stinkiest Foods – And Where to Try Them

The World’s Stinkiest Foods – And Where to Try Them

Along with the universal emotions of love, hurt, and happiness shared by all cultures around the globe, there is another thing that ties us together–and yes, you guessed it, it’s our bizarre love of smelly foods.

Sure, you can leave a slice of pizza under your bed for weeks, thus inventing one of the foulest smelling foods on the planet. However, our list below scours the earth in search of stinky foods that grow naturally, or foods that have been specifically rotted—ahem, aged—for future consumption.

Stinky Feet. Vomit. Wet Garbage. Rotten Eggs. Dirty Gym Socks. Body Odor – these are just a few words that have been used to describe these foods, many of which have been banned from public transportation, some airlines, and a few hotels.

From fermented herring to vegetables that smell worse than boiling Brussels sprouts, we’ve gone in search of the world’s stinkiest—yet surprisingly tasty—foods. 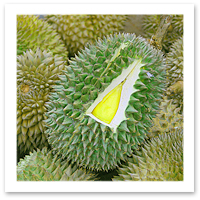 Our first stop is in Southeast Asia, known for some of the most savory cuisines on earth. Here, we find the mother of all fruits: Durian. If would-be consumers aren’t deterred by its otherworldly appearance, its putrid smell will surely disarm them.

Cracking open its prickly shell reveals a custardy flesh which adds to the mysteriously brain-defying complexity of this fruit, and eating it has been likened to “eating custard next to an open sewer.”

Next, we journey over to Thailand to find the stinky fruit’s cousin known as Cha Om–stinky vegetable. It has a sulfuric smell to it and is usually used in curries and soups.

Finally, the Philippines gives us bulad, a dried, salty, and pungent fish which is a regular source of protein for Cebuanos.

That decomposing road-kill smell that envelopes some street markets in China and Hong Kong actually comes from a tasty (yet reeking!) food literally called Stinky Tofu.

This popular snack is made from tofu which has been marinated in fermented milk, vegetables, meat or shrimp flavor, and herbs. Some say eating it tastes like tearing into rotten meat.

Hailing from Japan is Natto—fermented soy beans—readily served as a condiment or side dish. According to Marc Matsumoto of Norecipes.com “it has a slimy texture similar to okra and smells like sweaty dirty socks. ”

Loved by vegans for its egg-taste mimicking ability, Kala Namak is a spice made from black salt. It can be used to flavor tofu to mimic egg salads and omeletes.

According to Gurpareet Bains of Indian Superfood “it smells and tastes like triple concentrated rotten egg vapor. ” 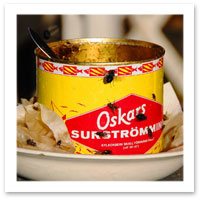 Opening up a can of surströmming unleashes a rotten stench so strong that one is momentarily left in shock. This Northern Swedish delicacy is made from herring brined for months. Once the can has been opened, pieces of surströmming are spread over buttered, crispy thin bread and then layered with slices of almond potatoes, chopped onions, and fresh dill sprigs.

Swedes aren’t the only Scandinavians who dig fermented fish. Head over to Iceland to try hákarl. This Icelandic fare is actually fermented shark and has a strong ammonia odor to it.

In West Africa, locust beans aren’t just thrown away. They’re left to rot, forming a substance called iru which is particularly used by the Yoruba-speaking regions as a flavoring condiment when cooking soups.

Burp a couple days after eating he-goat and people around you will still smell its residue. Goat meat in itself has a strong odor but male goats in particular have a much stronger smell which is more evident in their meat.

Popular along South Africa’s west coast is bokkoms. These are small fish cured in salt and left to dry in the wind for days, resulting in an overpowering scent.

Ha. Tahiti, with its crystal white beaches and clear blue waters, inspires visions of paradise for most people—only to be broken by the unpleasant smell of fafaru. This concoction, made with fish, lobster, or shrimp, gets its putrid smell from being marinated in fermented seawater. It is usually eaten with coconut cream.

Noni fruit is another Tahitian stinker with a strong smell and not so sweet taste. The fruit is chock full of vitamins and antioxidants, but benefiting from its body-healthy properties means confronting an odor similar to vomit.

A stinkiest foods list without cheese on it? Heresy!

It is widely known that cheese is amongst the stinkiest foods on earth, and we’ve journeyed right to the source: mainland Europe.

Popular in the Benelux countries (Belgium, Netherlands, and Luxembourg) and Germany, the notoriously pungent Limburger cheese is the most pungent on the mainland. Considering the same bacteria used to ferment the cheese is what causes human body odor, we’re talking about a real stinker here.

But wait? The Brits may have the stinkiest cheese of all. With its tongue-in-cheek moniker, Stinky Bishop is said to smell “like a rugby club changing room”. This is due the perry (fermented pear juice) it is drenched in during its preparation process.

You can read more about the Stinking Bishop’s recent accolade.

Visit Madison, Minnesota to try its pride and joy: Lutefisk. Granted, its origins are Scandinavian, but Minnesotans have embraced this delicacy and made it their own.

Whitefish such as cod is soaked in caustic lye soda for days, which gives it its unforgettable aroma. It is then baked or boiled and doused with butter to make its jelly-like consistency easier to tolerate.

Rounding out our list is a member of the onion family known as Ramps. Widely consumed in West Virginia and other parts of Appalachia, its flavor is a strong mix of garlic and onion. Be sure to stop by the annual “Stinkfest” in Bradford, Pennsylvania to sample various dishes featuring ramps.

Lola Akinmade is a writer and photographer who has written for many travel resources and received accolades for her work. She is also an editor with the Matador Network, and has firsthand experience sampling a couple of items on this list including surströmming.