The World’s Hottest Peppers—And Where to Eat Them 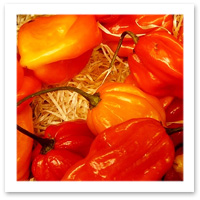 So you’re bored with the regular old hot sauce at your favorite Mexican joint. You’ve got a tolerance now, and with your iron-clad palate, you think nothing of a few gulps from that bottle of Sriracha for some light summer refreshment. What to do in this dreary fire-free world? Fear not, traveler. Here are some globe-trotting suggestions for where to find the hottest peppers on earth.

How Peppers are Rated

First a definition. In 1912, Chemist Wilbur Scoville developed a scale to measure the hotness or “pungency” of peppers, and the result is the Scoville Scale, which ranks the hottest peppers and spices in the world.

Who knew the spiciest edible substance on earth—8,000 times hotter than Tabasco sauce—was right in our backyard?

Blair’s 16 Million Reserve is made of raw capsaicin, the chemical component found in most chili peppers around the world, and tops the Scoville chart at 16,000,000 SR.

Sold in a tiny vial, these crystals can cause fainting with a single sniff, and downing an entire bottle will most likely end your life. A single crystal is enough to spice up an entire pot of stew. Even a bowl of tepid oatmeal can become the spiciest breakfast on earth.

The Naja Jolokia has been confirmed by the Guinness World Records as the most potent pepper on earth. It has a rating of between 800,000 and 1,000,000 SR.

This tongue-burner, also known as the Naga Morich, Ghost Pepper, Ghost Chili, and Bhut Jolokia, is found mostly in Northeastern India, and a few regions in Bangladesh and Sri Lanka. Equally as lethal as its red flesh are its seeds, which when ingested can literally leave one incapacitated for up to thirty minutes.

The Naja Jolokia regularly appears in tomato-based curries such as Vindaloo and Tindaloo, as well as Phall curry which combines at least 10 different peppers in a single dish.

These curries are served by Indian restaurants throughout the US and Canada, including Dhaba in New York, which serves a scorching Chicken Vindaloo with potatoes infused in a “dry chili” (aka Bhut Jolokia) sauce.

Grown in California, the Red Savina Habanero is the second spiciest pepper in the world, coming in at 580,000 SR. Other nicknames include the Dominican Devil’s Tongue pepper and the Ball of Fire pepper.

You’re likely to find Red Savinas in pubs and sports bars across the U.S. One noteworthy example is chicken wings doused with Red Savina, which can be found at Jake Melnick’s Corner Tap in Chicago.

Usually grown on the islands of Jamaica, Trinidad, Barbados, and a few others, the spicy red scotch bonnet is a key ingredient in various Caribbean Jerk dishes (chicken, goat, pork), and with a Scoville rating of 100,000-350,000 SR, does not disappoint when it comes to mouth-searing heat.

Known as the African devil (with a Scoville heat unit of 175,000 SR), the red Piri-Piri bird’s eye chili pepper is popular throughout the continent.

It is the base ingredient in traditional meat marinades found in Portuguese-speaking countries such as Angola and Mozambique. Variations of the pepper’s name include Peri-peri or peli-peli.

A spiciest foods list is incomplete without exploring the fiery cuisine of Southeast Asia. From the steamy streets of Bangkok to the coastal villages of Indonesia, the Bird’s Eye Chili pepper (chili padi) can be found swirling around in hot woks on a daily basis.

With a Scoville index of 50,000-100,000 SR, all you need to do to try this scorcher is take a short trip to your local Thai restaurant and order any dish with the word “Prik” in its name.

Rounding out our list, we journey over to Peru to find the Ají pepper. It’s the hottest in the region, with a Scoville heat unit between 30,000–50,000 SR. These peppers come in a variety of colors and are usually dried and ground into powder form for seasoning.

Ají is a key ingredient of local dishes such as tamales, Cau Cau (a local seafood stew), and the popular Papas a la Huancaína – a dish of yellow potatoes in a spicy, cheesy sauce called Huancaína.

Lola Akinmade is a writer and photographer who has written for many travel resources and received accolades for her work. She is also an editor with the Matador Network, and previously wrote about peppers around the world at Forbes Traveler.