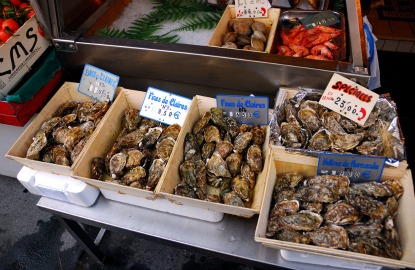 Long before American burgers went global, Parisians were feasting on what may be the world’s most perfect fast food: oysters. Consumption boomed in the 19th century—when oyster stands became a fixture outside Parisian brasseries—but these bivalves have been cultivated in France since it was part of the Roman Empire.

Today, the country is Europe’s top producer, with shuck houses in regions including Normandy, Brittany, the Charentes-Maritime, the Arcachon Basin near Bordeaux, the Thau Lagoon in the Languedoc-Roussillon, and Corsica. And with mid-winter being prime oyster-eating season, we rounded up the best places in Paris for half-shell indulgence.

It’s no surprise that the seafood sibling (22 Rue Paul Bert, 11e, 01-43-72-76-77) of the popular Le Paul Bert Bistro next door serves superb oysters, because the proprietor is Gwenaëlle Cadoret, the daughter of a famous oyster grower from Riec-sur-Belon in Brittany. The sole meunière is first-rate, too.

Just across the street from Gare Saint Lazare and around the corner from the big department stores Printemps and Galeries Lafayette, this popular seafood brasserie (111 Rue St Lazare, 8e, 01-43-87-50-40) has a small, circular sit-down oyster bar just inside the front door that’s perfect for solo dining or a quick shopping-break lunch.

Friendly Francisco Pires, the ecailleur (oyster shucker) who mans the stand at the excellent seafood house Lâ€™ Huîtrier (16 Rue Saussier-Leroy, 17e, 01-40-54-83-44) won the annual competition for France’s best oyster shucker last year, so watch him at work before you settle down for an oyster feast. Other good dishes here include the stuffed clams and grilled sole.

It’s all about oysters at this chic elbow-to-elbow shop-front restaurant (3 Rue Montfaucon, 6e, 01-44-41-10-07) in Saint-Germain-des-Pres, where the bivalves come from the Marennes-Oléron and the only other edibles are boiled shrimp, fresh sea urchins, and clams. They pour a great list of Loire Valley white wines, and this place attracts a fashionable local crowd.

American-born Alexander Lobrano has lived in Paris for 25 years, where he’s written about food and travel for publications including Bon Appetit, Food & Wine, Travel & Leisure, Departures, and Conde Nast Traveler. He’s a regular contributor to the New York Times T Style, and the author of Hungry for Paris: The Ultimate Guide to the City’s 102 Best Restaurants (Random House), which is also the name of his blog.