Beaches Kaila Yu Do You Enjoy Visiting Hawaii? You Should Pay a Fee
Home  >  News   >   The Whirlwind Italian Tour

For busy professionals, leisurely tours aren’t always an option. This nine-day intinerary from Venice to Florence to Rome is designed for on-the-go types who want to see as much as they can in a few days. 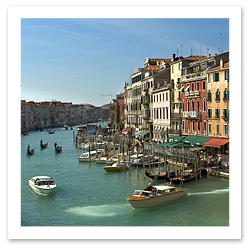 Arrive in Venice’s Marco Polo Airport (there are some direct flights from the United States), take the boat across the lagoon to Venice, check into your hotel, then get out, and get lost in the back canals for a couple of hours before dinner. If you can get a reservation, Osteria da Fiore (Celle del Scaleter, San Polo 2202) would make a memorable first meal in Italy; it’s an unforgettable place for Adriatic seafood.

Logistics: At the airport, follow signs for water transport and look for Alilaguna, which operates the soothing, one-hour boat trip into Venice. The boats stop at the Lido, near Piazza San Marco. From there you can get to your hotel on foot or by vaporetto. The water taxis are much more expensive and aren’t really worth the cost, although they’ll take you directly to your hotel.

Begin by skipping the coffee at your hotel and have a real Italian coffee at a real Italian coffee shop. Spend the day at Venice’s top sights, including the Basilica di San Marco, Palazzo Ducale, and Galleria dell’Accademia. Stop for lunch, perhaps sampling Venice’s traditional specialty, sarde in saor (grilled sardines in a mouthwatering sweet-and-sour preparation that includes onions and raisins), and be sure to check out the ancient fish market, Rialto Bridge, and sunset at the Zattere before dinner. Later, stop at one of the pubs around the Campo San Luca or Campo Santa Margarita.

Logistics: Venice is best seen by wandering. The day’s activities can be done on foot, with the occasional vaporetto ride.

Get an early start and head out of Venice on a Bologna-bound train. The ride to Ferrara is about an hour and a half. Visit the Castello Estense and Duomo before lunch; a panino and a beer at one of Ferrara’s prim and proper cafés should fit the bill. Wander Ferrara’s cobblestone streets before hopping on the train to Bologna (a ride of less than an hour). In Bologna, check into your hotel and take a walk around Piazza Maggiore before dinner. At night, you can check out some of northern Italy’s best nightlife.

Logistics: In Ferrara, the train station lies a bit outside the city center, so you’ll want to take a taxi into town (check your luggage at the station). Going out, there’s a taxi stand near the back of the castle, toward Corso Ercole I d’Este. In Bologna, the walk into town from the station is more manageable, particularly if you’re staying along Via dell’Indipendenza. 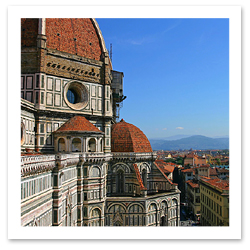 After breakfast, spend the morning checking out some of Bologna’s churches and piazzas, including a climb up the leaning Torre degli Asinelli for a red rooftop–studded panorama. After lunch, head back to the train station and take the short ride to Florence. You’ll arrive in Florence (photo, right) in time for an afternoon siesta and an evening passeggiata (stroll).

Logistics: Florence’s Santa Maria Novella train station is within easy access to some hotels, farther from others. Florence traffic is legendary, but taxis at the station are plentiful; make sure you get into a licensed, clearly marked car lined up outside.

This is your day to see the sights of Florence. Start with the Uffizi Gallery (reserve your tickets in advance), where you’ll see Botticelli’s Primavera and Birth of Venus. 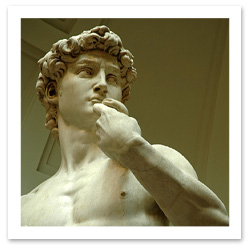 Next, walk to the Piazza del Duomo, the site of Brunelleschi’s spectacular dome, which you can climb for an equally spectacular view. By the time you get down, you’ll be more than ready for a simple lunch at a laid-back cafe. Depending on your preferences, either devote the afternoon to art (Michelangelo’s David at the Galleria dell’Accademia, the magnificent Medici Chapels, and perhaps the church of Santa Croce) or hike up to Piazzale Michelangelo, overlooking the city. Either way, finish the evening in style with a traditional bistecca alla fiorentina (a grilled T-bone steak with olive oil).

After breakfast, board a train for Lucca. It’s an easy 90-minute trip on the way to Pisa to see this walled medieval city. Don’t miss the Romanesque Duomo, or a walk in the park that lines the city’s ramparts. Have lunch at a local trattoria before continuing on to Pisa, where you’ll spend an afternoon seeing the Leaning Tower, along with the equally impressive Duomo and Battistero. Walk down to the banks of the Arno River, contemplate the majestic views at sunset, and have dinner at one of the many inexpensive local restaurants in the real city center — away from the most touristy spots.

Logistics: Lucca’s train station lies just outside the walled city, so hardier travelers may want to leave the station on foot; otherwise, take a taxi. Check your luggage at the station. Pisa’s train station isn’t far from the city center, although it’s on the other side of town from the Campo dei Miracoli (site of the Leaning Tower).

Three hours south of Pisa is Orvieto, one of the prettiest and most characteristic towns of the Umbria region, conveniently situated right on the Florence–Rome train line. Check out the memorable cathedral before a light lunch accompanied by one of Orvieto’s famous white wines. Get back on a train bound for Rome, and in a little more than an hour you’ll arrive in the Eternal City in time to make your way to your hotel and relax a bit before you head out for the evening. When you do, check out Piazza Navona, Campo de’ Fiori, and the Trevi Fountain — it’s best in the evening — and take a stand-up aperitivo (Campari and soda is the classic) at an unpretentious local bar before dinner. It’s finally pizza time; you can’t go wrong at any of Rome’s popular local pizzerias.

Logistics: To get from Pisa to Orvieto, you’ll first catch a train to Florence and then get on a Rome-bound train from there. Be careful at Rome’s Termini train station, which is a breeding ground for scam artists. Keep your possessions close at hand and only get into a licensed taxi at the taxi stand. 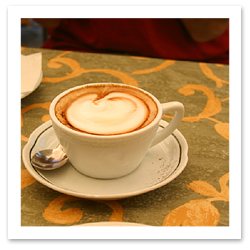 Rome took millennia to build, but unfortunately on this whirlwind trip you’ll only have a day and a half to see it. In the morning, head to to the Vatican Museums to see Michelangelo’s glorious Adam at the Sistine Chapel. See St. Peter’s Basilica and Square before heading back into Rome proper for lunch around the Pantheon, followed by a coffee from one of Rome’s famous coffee shops. Next, visit ancient Rome — first see the magnificent Pantheon, and then head across to the Colosseum, stopping along the way along Via dei Fori Imperiali to check out the Roman Forum from above. From the Colosseum, take a taxi to Piazza di Spagna, a good place to see the sunset and shop at stylish boutiques, Take another taxi to Piazza Trilussa at the entrance of Trastevere, a beautiful old working-class neighborhood where you’ll have a relaxing dinner.

Head by taxi to Termini station and catch the train ride to the Fiumicino Airport (also known as Leonardo da Vinci Airport). Savor your last cup of the world’s richest coffee at one of the coffee bars in the airport before boarding.

Logistics: The train from Termini station to the airport is fast, inexpensive, and easy — for most people, it’s preferable to an exorbitantly priced taxi ride that, in bad traffic, can take twice as long.