News Ronny Maye Should You Cancel Your Vacation to an Area Impacted by a Natural Disaster?
NewsThe Trick to Coming Home from Holiday

The Trick to Coming Home from Holiday 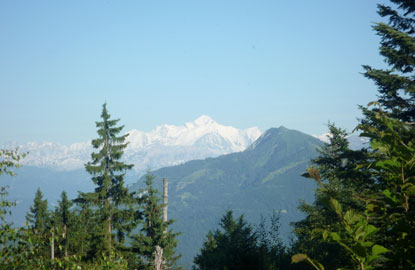 The problem with going away is the come down of coming home. The sudden switch from receiving fresh, fluffy towels at turn-down service to realising that all your own towels are wet and still sitting in your washing machine can be harsh.

Decompression is key to ducking the slap of domesticity. So with this in mind, we set out to organize the last night of our uber-glam Italian driving holiday (here’s what I packed; and here’s what I wore). After two weeks of lolling in luxury’s divine lap, Monsieur and I sought out something simple to serve as a literal and figurative break between the la-la of Lake Como and the reality of home.

A friend in Geneva (who shares our love of hiking but also happens to work for Mandarin Oriental, and thus appreciates my inner princess) suggested we book dinner and a room at Le Bonheur dans le Pre, a converted farmhouse on a ridge above Lake Geneva (on the France side) overlooking the Alps. "It’s not Villa d’Este," came his tongue-in-cheek warning "but you’ll eat well and, well… you’ll see."

And see we did. For miles. The Alpine views from the terrace were gorgeous. A three hour trek up the ridge revealed the Mont Blanc massif in all its massiveness (pictured above), which we had just driven through via the Mont Blanc tunnel. Lesson learned: If you need to be brought back down to earth, head for the hills and let some mountain scenery put things in perspective. 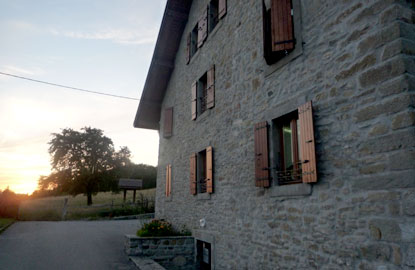 Back at Le Bonheur dans le Pré (which aptly translates to Happiness in the Fields) we noticed that our friend in Geneva was right again. This wasn’t Villa d’Este. The towels were definitely not fluffy and the hand-shower in our plastic apricot-colored en-suite was a dribbler. But the room was clean and cosy and perfectly suited to a good night’s sleep for people who’d done as much driving and hiking as we had that day. We knew that it would be lights-out shortly after dinner and you can’t see apricot in the dark.

Downstairs in the rustic dining room (which is really the only room, and opens onto the terrace and view) we were met by Barbara who set up Le Bonheur with her other half, Christophe, eight years ago. As well as appearing to handle just about everything front of house with charm and ease, Barbara is a keen wine connoisseur, specialising in high quality organics which they sell from the adjacent cellar. While she spreads warmth throughout the room with her kind smile and surprising aperitif suggestions, Christophe sizzles in the (also organic) kitchen, preparing creative dishes which are as delightful as they are delicious. 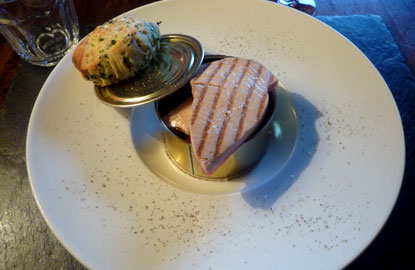 More than alliterative, “delightful” and “delicious” are really the perfect words to describe dishes like tuna served two ways (seared and tartare) playfully presented in a stripped chicken-of-the-sea can. Delightful! And delicious. The steak that followed was tender and flavorful; the cheese course was like no other (fenugreek studded tomme—wow!), and the deconstructed crumble for dessert was the way apricot was meant to be.

After two weeks of fancy dining experiences, finding ourselves at the welcoming table of this young and talented couple was another grounding moment for Monsieur and me, reminding us that the secret to an extraordinary meal is quite simply love. Barbara and Christophe obviously love what they do and their passion came through in every bite.

So it was with Monsieur’s foot on the pedal and our feet firmly on the ground, that we drove back to Paris humbled and thrilled to have discovered this charming gem. After the dizzying heights of our lavish holiday, Le Bonheur dans le Pré gave us the soft landing we needed—and of all the addresses we collected during our adventure, it’s the one I most want to share.