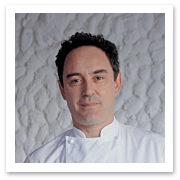 Reservations are booked a year in advance for Ferran Adrià’s El Bulli restaurant in Roses, which has been named the world’s top restaurant on several occasions by UK’s influential Restaurant magazine. The restaurant is about 175 km north of Barcelona, on an isolated beach. The El Bulli website features a comprehensive photo catalog of Ferran Adrià’s creations from 1985 to present: www.elbulli.com. (photo, right)

Juan Mari Arzak is recognized for modernizing and reinvigorating Basque cuisine at Restaurante Arzak in San Sebastián, which he now operates with his daughter Elena, who represents the fourth generation of Arzak restaurateurs. The restaurant was founded in 1897 by Juan Mari’s grandfather. Despite his deep culinary roots and decades-long career, Arzak says he works to maintain a fresh perspective. “It’s important to look at the world through a cook’s eyes, but to think like a little kid,” he says. “Because when you are a boy you have the capacity to be amazed and surprised.” www.arzak.es.

The cuisine at Nodo fuses Spanish and Japanese ingredients and techniques. Alberto Chicote’s version of tuna tataki, for example, features seared tuna, which is macerated in soy sauce and rice vinegar, then chopped and served with chilled garlic cream and garnished with drops of olive oil and black-olive powder. “When you know more techniques and can get more products to the kitchen, that’s really when you form your own identity — because you can choose,” Chicote says. “Without investigation, you only use what you have, and that’s not freedom.” Nodo, Calle Velàzquez 150, Retiro/Salamanca, Madrid. 915/644044. 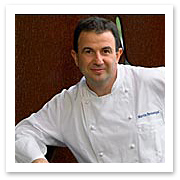 Quique Dacosta is the inventive self-taught chef at the helm of El Poblet in Dénia, a coastal town in the Alicante region. The restaurant specializes in contemporary seafood and local rice dishes, but can veer also into highly conceptual fare like his “Guggenheim Bilbao oysters,” a dish of shimmering oysters in barnacle stock, glazed with a sauce made from aloe vera, agar agar (a seaweed-based gellifier) and powdered silver. www.elpoblet.com/.

Joan Roca is chef at El Celler de Can Roca in Girona, which he runs with his two brothers, Josep and Jordi. Roca is known for his work exploring the intersection between aroma and flavor, with dishes such as his “Adaptation of the Perfume Angel by Thierry Mugler,” featuring cream of toffee, chocolate, gelée of violet, and bergamot and red fruits ice cream with vanilla. Savories include smoked lemon prawn with green peas and licorice, and white and green asparagus with cardamom oil and truffles. www.cellercanroca.com/. 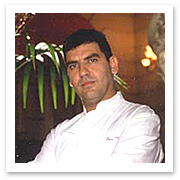 Francisco “Paco” Roncero is chef at La Terraza del Casino in Madrid, one of the city’s most acclaimed establishments. He is considered one of Ferran Adrià’s best students. “When I started working with Ferran [in 1998], my whole concept of cuisine changed,” he says. “I started researching and trying to do new things. Now my cuisine is modern, vanguardia, without losing sight of tradition.” Alcalá 15, sol. 91/521-8700. (photo, right)

In his early 30s, Daniel García is one of the younger practitioners of la nueva cocina, as well as head chef at El Calima, the restaurant in the Hotel Gran Meliá Don Pepe in Marbella. “My cultural inspiration comes from the area where I work, in Andalucía, the south of Spain,” he says. “I try to convey the memory of flavors that each one of us has built up through our lives.” Acclaimed dishes include gazpacho with anchovies and crumbled queso fresco, and a passion fruit flan in herb broth with eucalyptus-thyme essence. Hotel Gran Meliá Don Pepe, Ave. José Meliá, Marbella. 952/764252.