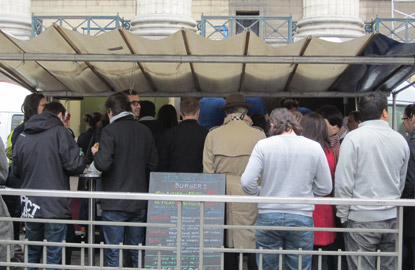 When it comes to what’s hip, Paris is usually setting the trends, not following them, particularly in the areas of fashion, art, wine, and food. But there’s one area in which Paris is playing catch up: food trucks. Compared to its American counterparts—cities like Portland, San Francisco, Los Angeles, and New York where there are hundreds of trucks—Paris has just two. But those lone two trucks, Le Camion Qui Fume and Cantine California, are setting both Parisian and visitor taste buds en feu, causing crowds of people to line up every day for authentic, gourmet American fare. 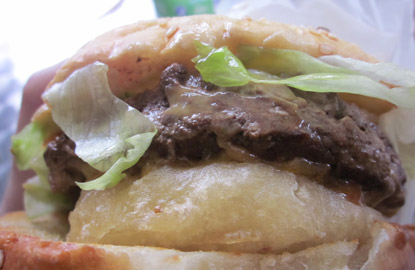 Ferrandi-trained American Kristin Fredrick opened Le Camion Qui Fume ("the truck that smokes") to fill what she called a burger void in the Paris market. "There are plenty of places to find a decent burger in Paris. However, none were satisfying my cravings for a juicy and decadent burger, the one that leaves you feeling a little guilty but you always think was worth it. "

Judging by the sheer volume of people lined up in front of her truck, Parisians are ready for a little burger guilt, as were we, so we queued up to taste it.

We tried the Classique (dressed with cheddar cheese, lettuce, onions, tomato, mayo, pickles, and an onion ring on request), the Barbecue (dressed with cheddar, bacon, onion ring, and barbecue sauce), the Bleu (blue cheese, caramelized onions, and port sauce), and of course, fries. The verdict: all-American home run. The homemade buns were toasted and still crispy around the edges, the fries were nicely salted and crisp, and the burgers were juicy and still slightly pink on the inside.

Parisians are going wild over the Barbecue, and rightly so; it was our favorite too, though if you want a slightly more Parisian burger experience (dubbed "more Parisian" simply for its non-cheddar cheesiness), you’ll still be thrilled with the Bleu.

Where to Go: The truck parks at different places throughout the week, so check the website or daily tweets for locations. LeCamionQuiFume.com

Insider Tip #1: Arrive before the start time. If you arrive at or after, you could wait up to an hour for your food.

Insider Tip #2: Plan to go to their Place de la Madeleine location. If you accidentally fail on tip #1 and have to wait a while, you can busy yourself at some of the nearby drool-worthy foodie shops: Mariage Freres Tea Salon, Caviar Kaspia, Fauchon, or Hediard. But come back before the quoted time; burgers and fries are best enjoyed hot. 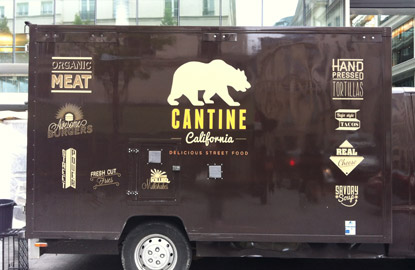 American/Canadian Jordan Feilders wanted to bring the California- and Mexican- influenced food of his upbringing to Paris. Enter Cantine California, which opened early this year to rave reviews and long lines. Jordan credits the enthusiasm to Parisians’ love of food, adventurous spirit, and possibly a little nostalgia. "A lot of people have traveled to the U.S. or watched American TV shows, so a yummy food truck [brings] back good memories."

Mexico, America, and France come together on his organic menu, which features treats like avocado on the CaliClassic burger; two cheeses (Beaufort and gouda), caramelized onions, and blackened red peppers on the Dude’s burger; and even a veggie burger offering, which is practically blasphemy in meat-eating France.

We tried the carnitas tacos (made with tender pork-shoulder meat and topped with a pico de gallo-type salsa and served with a side of black beans), a Half Moon Bay burger (made with blue cheese, blackened red peppers, caramelized onions, tomato, lettuce), and a red velvet cupcake.

The tacos were homesick-invoking, though not quite as spicy as those in the states (see our Insider Tip below) and there was a glitch in the kitchen so we didn’t get to sample the homemade tortillas. The Half Moon Bay burger was cooked to perfection and juicy, a nice change from the traditional Paris burger which can be a bit dry. The cupcake was moist, and the cream cheese frosting was less sweet than you’ll find in the states, which we liked.

Breakfast is also served from 10 am to 12:30 pm with buttermilk blueberry pancakes, French toast, and, la pièce de résistance, a breakfast burrito—two magic words you probably won’t hear anywhere else in Paris.

What to Get: The Half Moon Bay Burger with sweet potato fries

Where to Go: Cantine California also changes locations throughout the week, so check the website or Twitter for the schedule. CantineCalifornia.com

Insider Tip: We loved the tacos, but a heads-up if you’re expecting the spicy heat most tacos have in the states: you won’t find that in Paris, so embrace the tasty, albeit less caliente, flavor and go with it.

With the endless options of culinary delights available in Paris, you might be asking yourself why sampling classic American fare is worth your possibly limited time in Paris. If hobnobbing with trend-setting French foodies isn’t enough of a reason for you, consider this: when you indulge in food-truck fare in Paris, you’re participating in a time-honored French tradition with a new twist. "France has had food markets [and countryside food trucks] for hundreds of years," says Jordan. Kristin adds, "We enjoy lining up outside together to eat on the street; it’s a throwback to more simple times."

Given the success of both trucks, you can expect to see more food trucks popping up around Paris, though on a smaller scale than in America. "Food trucks can only [sit] themselves in a limited amount of spots in a limited amount of food markets," says Jordan, which may partially explain why the trend hasn’t exploded in Paris yet. But look for coming trucks to feature concepts beyond American fare. "You can get so creative with this," says Kristin. "French food, Asian-inspired cuisine, Mexican… the sky’s the limit."

For up-to-the-minute hotel and restaurant recommendations, plus the best planning advice, check out our Paris Travel Guide.